Vaudeville humor leaves Lone Ranger in the dust by PIERS MARCHANT SPECIAL TO THE DEMOCRAT-GAZETTE | July 5, 2013 at 2:34 a.m. 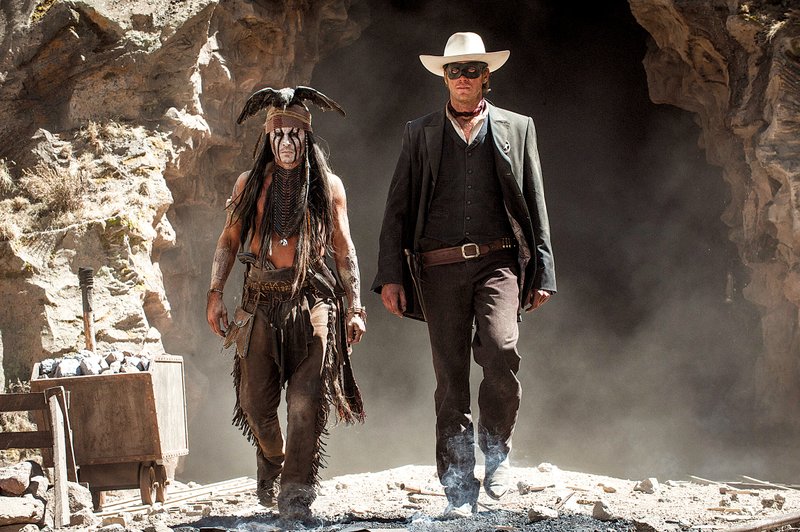 In Gore Verbinski’s The Lone Ranger, Johnny Depp assumes the iconic role of Tonto, while the much taller Armie Hammer portrays the titular hero.

You can certainly see what Disney’s thinking was on this thing: Hell, if the combination of director Gore Verbinski, producer Jerry Bruckheimer and star Johnny Depp some how conjured up a raging financial success out of a trilogy of movies about a bloody amusement park ride, imagine what they could do with a pre-existing franchise of well-known and beloved characters from the Wild West.

What’s made abundantly clear - in fact, what has been obvious ever since the first dreadful sequel to the shockingly entertaining original Pirates of the Caribbean - was that the first Pirates film was a wildly successful fluke, a peculiar happenstance of a clever-enough script, a director with some visual acuity, and a leading man who turned his character into a tour-de-force of drunken, kitschy amusement - he stole every scene he was in. In that film’s aftermath, we have had three miserable sequels, the promise of a fourth (!), and now, the team’s rendition of a Western hero, whom they reduce to a veritable pile of ash and cinders. 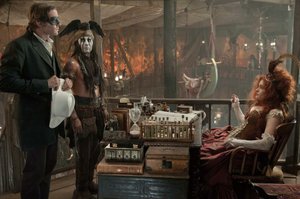 In a summer blockbuster season that’s already seen one of Iron Man’s greatest villains shown to be a total fraud, and Superman intentionally killing a guy, this film is easily the worst miscalculation of the summer.

Where to begin with this ill-conceived mess? Let us start with their leading men. Depp now seems as if he can do only roles in which he is desperately attempting to steal the show (or doesn’t bother showing up to, as in the case of The Tourist). Casting a white man as an American Indian is absolutely nothing new in terms of Hollywood racial affronts, but contorting Tonto into a confusing clown in Kabuki white face, assimilating standard stereotypes as fast as he chews through scenes, becomes infinitely more distressing. Depp plays him with an insufferable wink and a nod, overplayed and smug.Like the film, he assumes he’s being riotously funny, even as the cheap jokes and tired gags make you wince.

If possible, our titular hero, played by Armie Hammer, fares even worse: He’s a bland, self-righteous bureaucrat who continually proves himself to be a wet blanket without the faintest notion of commonsense. Not even the horrific murder of his brother (James Badge Dale) - which happens within inches of him - gives him any real pause to consider his stock. He’s played for dumb laughs at every turn, and constantly needs Tonto and his horse to bail him out of his own idiocies.

There is a plot, of course, something having to do with an evil developer (Tom Wilkinson) putting his rail lines through protected Comanche territory and stealing an enormous depot of silver in the process, but, as always in these things, it’s merely the thin, frayed fabric upon which a huge number of ludicrous action scenes are pinned. Best not to dwell on it, in other words, though it might be worth noting that the Ranger’s suddenly widowed sister in-law (Ruth Wilson) by the end of the film is kissing him on the mouth for some nonsensical reason or other.

It’s an affliction from which the entire film suffers: The screenwriters, including Justin Haythe and Ted Elliott, have come up with one of the more bizarrely misanthropic scripts of the year. The tonal shifts - between brutal darkness and total inanity - come so rapid-fire and without due preparation that they stick in your throat like a gobstopper. To take but one example, we have a truly horrific scene of Indian slaughter, wherein a brave group of Comanches descends on a cowardly lot of cavalry protecting an illegal train track in Indian territory, only to be wiped out by the vastly superior firepower of the white men. Verbinski has the camera linger on the carnage enough to have it register - this is how brutish white men came to wrest the land away from its original inhabitants - only to have the scene end with our two bickering heroes looking up at the Ranger’s horse (who, in this film, seems to possess magical properties for reasons never really made clear), as Silver is inexplicably standing up on a high tree branch, wearing the Ranger’s white Stetson like some sort of vaudeville routine. “Something is wrong with that horse,” Tonto intones gravely. Yuk, yuk.

The film works further to undermine every iconic element to the Ranger, reducing him to a simpering do-gooder, giving him a magic horse with a peculiar sense of humor. Even their use of the famous “William Tell Overture” comes too late to salvage anything. It’s all too clear the producers thought the original show was ridiculous, and they can’t help but point that out again and again.

As for Depp, I fear he has been Al Pacinoed (wherein a supremely talented and slightly under appreciated actor receives such financial acclaim and popularity for performing his schlockiest role, he is forevermore tainted by the desire to ham-hand his parts and ceaselessly pursue an audience’s ardor). He has gone from being an interesting character actor trapped in a pretty, leading man’s visage to becoming the worst kind of preening clown, incessantly mugging for the camera and playing every scene as if he automatically deserves the punch line.

Wanting to somehow meld the fanciful humor of the Pirates movies with a more brutish treatise on the evil that white men do, the film is neither comedy nor drama, and fails miserably at both. What it does have, in clear abundance, is money. Money to stage endless stunt set pieces on trains, money to pay its stars their enormous salaries, money to pay for everyone’s impressive facial hair. Unfortunately, that’s all it has, and if there is any justice, on the plains or otherwise, this deplorable hack job will be left twisting in the wind like some cowardly cattle rustler.