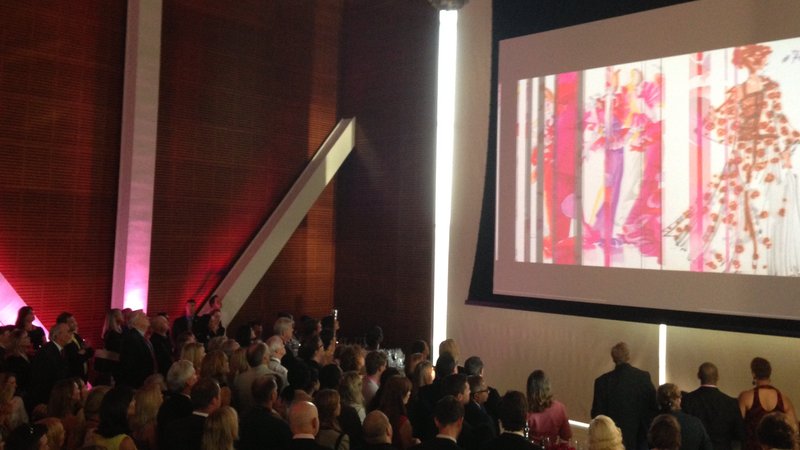 Patrons at the Clinton Presidential Center Great Hall watched a video from "Oscar De La Renta: American Icon" during the dedication of exhibit featuring dresses from the famous fashion designer on Monday night.

The Clinton family joined famed fashion designer Oscar De La Renta on Monday evening to formally open an exhibit of notable dresses and other clothing created by De La Renta himself at the Clinton Presidential Center.

The exhibit, which features a vast number of dresses that have been worn be first ladies such as Hillary Clinton, Laura Bush and Nancy Reagan, as well as designs featured in various movies, fashion shows, events and on magazine covers, will be at the Clinton Center through December 1.

Several hundred patrons were on-hand for the presentation, including Arkansas Governor Mike Beebe and Arkansas Attorney General Dustin McDaniel, along with De La Renta, who has been a close friend of the Clinton family for many years.

All three Clintons — Hillary, former President Bill, former first lady and their daughter Chelsea — made remarks in a press conference at the event, praising De La Renta's designs. De La Renta also spoke, praising the Clintons for their support over the years.

De La Renta came to the United States in 1963 and began creating a fashion empire with designs that have ben worn by models and celebrities, including being featured on the cover of Vogue Magazine. Anna Wintour, editor-in-chief of Vogue, was also on-hand to make remarks praising De La Renta and the Clintons. Wintour added that it was De La Renta's idea to put Hillary on the cover of the magazine in 1998.

Both Wintour and De La Renta also hinted that they would like to see Hillary run for President in 2016, though there has been no official announcement from the Clinton camp.

The event caps off a historic day for Hillary, who was also in town for the dedication of the new children's library in downtown Little Rock on Monday afternoon. The library was named in her honor.