Creatures rise from Pacific Rim to eat Hong Kong by PIERS MARCHANT SPECIAL TO THE DEMOCRAT-GAZETTE | July 12, 2013 at 2:11 a.m. 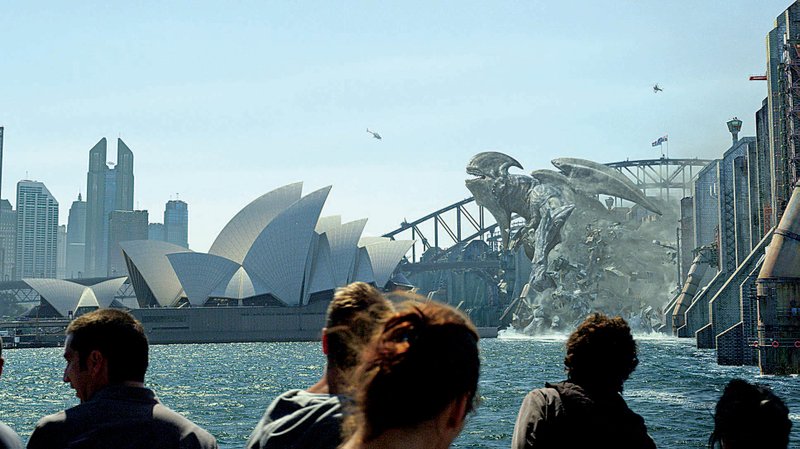 The Sydney Opera House is threatened by a rampaging “kaiju” in this relatively quiet scene from Pacific Rim.

High above the shattered streets of Hong Kong, a giant, reptilian monster does vicious battle with an equally massive robot, helmed by two human beings situated in the head of the machine. The two combatants trade enormous blows, raining down debris over the ruined, littered streets. At one point during the combat, the monster drives the robot off-balance enough so that it has to reach a massive, mechanical hand behind itself in order to keep from toppling over. The hand rips through a giant commercial high-rise, laying waste to everything in its path until it comes to a hard stop right at the edge of someone’s long-deserted cubicle. The resultant titanic force then comes to rest, softly tippling the steel-ball perpetual motion machine sitting inconspicuously on the desk, causing the balls to gently knock back and forth.

It is this sense of peculiar scale - from much larger-than-life behemoths to that tiny comic detail - that director Guillermo del Toro infuses in this film, a kind of chaotic whirl of different action genres and graphic novel components. Scale, from impossibly towering creatures and robots to the minute cultural impacts of their conflict, is the overarching thematic element in this wildly entertaining action flick.

Del Toro, whose previous work includes the comic book-based Hellboy pictures as well as the sublime Pan’s Labyrinth and The Devil’s Backbone, is an extremely gifted visionary artist who, even in his more adult-minded fare, never loses his sense of childhood imagination, thrilling and terrifying. Like iconic Japanese children’s filmmaker Hayao Miyazaki, his films are filled with the etched details of his young, impressionable mind, and it is in those precious minutiae that his action films very often rise above their genres into something a good deal more interesting and emblematic. 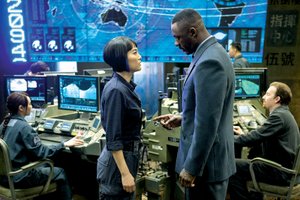 The story is straight out of the Japanese monster movies of the ’50s and ’60s. In the near future, a giant space time rift opens somewhere deep in the Pacific that allows these enormous, horrifying creatures to emerge out of the depths and wreak havoc on populated coastal cities. The creatures, known as Kaiju (Japanese for “big monster”), begin coming with terrifying rapidity. Humanity’s response is to join together, different countries sharing technologies and materials in order to build equally humongous humanoid robots known as Jaegers, controlled from within the giant heads of the mechanisms by two mind-melded pilots working in tandem to combat them. At first, the Jaegers lay waste to the creatures but eventually the monsters start learning human strategies and adopt tricks to counter them.

One of the first casualties of this turn for the worse is Yancy Becket (Diego Klattenhoff), the brother of Raleigh (Charlie Hunnam), who watches in horror as his older sibling is ripped out of the control center of their Jaeger and into the glowing, gaping maw of a thunderous beast. In the ensuing years, the Jaeger program is downgraded, leaving only the leader, Stacker Pentecost (Idris Elba), a former Jaeger pilot, to try and salvage the remaining units to mass for one last attack in an attempt to ram a nuclear bomb into the rift itself, destroying the creatures’ ability to enter into our universe.

Coaxing the remaining Becket brother back into the fold, Pentecost takes his remaining ragtag unit down to Hong Kong, where he trains the last few remaining pilots for this final mission. Raleigh, still shattered by his brother’s death, eventually finds salvation in the form of Mako Mori (Rinko Kikuchi), a female Japanese would-be pilot, whose strong desire to avenge her murdered family is the basis for her determination, despite Pentecost’s strange reluctance to give her a mission.

Also in the mix are two mismatched young scientists, Gottlieb (Burn Gorman) and Geiszler (Charlie Day, in full Bobcat Goldthwaite mode), who figure out a way to use the drifting mind-meld technology used with the Jaegers with a Kaiju brain, giving them valuable insight into the mindset and purpose of the creatures.

Great care has been given to the physical details of things - the Jaegers have battle scars and paint scrapings, with older versions looking a good deal more steam punk than their more modern, high-tech replacements. The creatures, too, each have a particular specificity to them - a giant, bulbous stomach, say, or a sharklike dorsal fin - that makes a certain kind of animalistic sense. Care and planning have gone into these creations in order to give them a hierarchy and order. While none of this makes the story realistic exactly, it very much helps to make the world del Toro has created feel a good deal more lived in. Later in the film we meet a conniving crime lord (played by longtime del Toro muse Ron Perlman) living in a section of the city known as the Bone Slums who traffics in Kaiju body parts, selling bone powder and entrails for hundreds of dollars an ounce. It is a world, in other words, where people still find ways to take financial advantage of even the most terrifying of human crises.

His cast is racially diverse and largely unheralded (Hunnam, his lead, is probably still best known for playing a lovesick teenager in the British version of Queer as Folk), which is a welcome relief from the endless parading of stars in most of this summer’s other big-budget affairs. Casting little known (Gorman) or lightly regarded (Day) actors allows the audience to identify with them far more than if we were just seeing another star turn by Tom Cruise. There also aren’t many directors who would have been able to latch onto Perlman’s particular strengths the way del Toro has. The actor is the equivalent of Bruce Campbell in Sam Raimi pictures, a comic foil who helps set the tone for the whole production.

The film still cuts corners, storywise. None of the characters are given much more than a few minutes of nonaction screen time, so believing the romantic buildup between Becket and Mori is a bit of a stretch. Del Toro’s attention to detail is significant, and he’s also a gifted storyteller, crafting excellent sequences like a form of violent, cartoon poetry but nevertheless, some of the extended action sequences with the monsters and robots hip-deep in the ocean or on city streets are such a snarl of motion, debris and endless, endless rain they become nearly incomprehensible, so submerged in the action is del Toro’s camera.

Many of the plot elements at the end seem contradictory to what we’ve been led to believe elsewhere in the film, which makes for a rather brief and unsatisfying denouement, among other things, but fortunately there’s enough churning glory in the sheer spectacle of the battle royals that you aren’t likely to dwell long on such inconsistencies.

In short, we have finally achieved a summer action blockbuster worthy of its designation, bombastic and audacious. You wouldn’t go to be intellectually stimulated - unless you happen to be deeply moved by 100-story-tall crustaceans - anymore than you would go to a French comedy in order to be terrified. Fortunately, it turns out the world is a big enough place to accommodate both concerns.