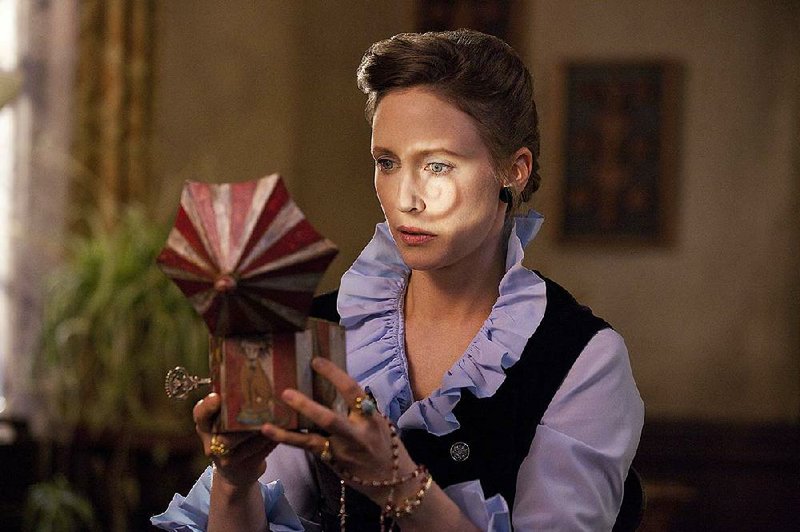 James Wan is all of 36, so you’d have to consider him pretty young to have already created a cottage industry. Back in 2004, the Malaysian director teamed up with his good friend Leigh Whannell, whom he met at college in Australia, and cashed in on the emerging torture-porn trend with the immensely popular Saw. Leaving the endless sequels of that franchise to other production teams, he and Whannell went on to further add to their horror genre checklist: a possessed ventriloquist dummy flick (Dead Silence), followed in short order by a haunted house number (Insidious). Now, sans Whannell, Wan has set his sights on yet another staple of the genre: the demonic possession story, using the obligatory “Based on True Events” tag as a further badge of homage.

As these things go, it’s certainly not all bad. Wan certainly isn’t any kind of provocateur, breaking new ground with his gripping vision, but he makes no pretenses otherwise. His films are peppered with a standard litany of horror tropes - spider webs, falling picture frames, creaking doors, creepy children - less for laziness’ sake than to bask in the love he has for such standard spooky conventions. You could say he’s well versed in the art of cut-and-paste scares.

Working from a script by Chadand Carey Hayes, Wan’s film concerns the real-life “demonologist” team Ed and Lorraine Warren (here played by Patrick Wilson and Vera Farmiga), who made their hay in the ’60s and ’70s as paranormalists, best known for being among the first investigators to examine a haunted mansion in Long Island in what would come to be known popularly as the “Amityville Horror.”

They come to the aid of a hippie-ish couple, Roger and Carolyn Perron (Ron Livingston and LiliTaylor), whose just-bought beautifully ramshackle country estate has proven to be filled with various kinds of hauntings, terrorizing the couple and their five daughters with rancid smells, foot-pulling, creaking floorboards and ghostly visions (to say nothing of their poor dog, Sadie, who barely lasts 10 minutes of screen time before becoming the first victim).

Carolyn, a clairvoyant, quickly assesses the problem and determines that the cause is the spirit of an ancient witch who was burned at the stake in the infamous Salem trials - which suggests the fevered pilgrims were right at least once in their witch-killing frenzy - and has forevermore haunted the 200 acres of the original estate (since broken up into smaller parcels), afflicting mothers elsewhere to do bodily harm to their children. Horrified, the family heads out to a nearby motel, and let the Warrens attempt to de-possess the house with the help of an exorcism.

Near the beginning of the film, after a series of paisley shirts, fabulously ugly hair extensions and self-conscious ’70s-style camera movements - including a striking long zoom to one of the young daughters playing by a pond - there are a few minutes where you imagine Wan might go the whole hog and splay forth his influences and inspirations like some kind of Tarantino vehicle. But before too long, he dispenses with many of the clever camera shots and sweeping homages and just gets down the business of trying to scare his audience. In this, he largely succeeds - at least if the diverse audience in attendance at my screening is any indication - even if you could practically set a metronome to the pace and nature of his horror beats. Along the way, he makes especially good use of matches and creepy crawl spaces.

It’s thin and more than a little idiotic, but it’s not without its charms. If you’re willing to put up with a hefty amount of clunky dialogue (“Sometimes when you’re haunted it’s like stepping on gum - it stays with you,” Roger and Carolyn are helpfully informed) and a stockpile of haunted house cliches, there’s certainly fun to be had. Just don’t go expecting shocks and horrors you haven’t already experienced countless times before.

Wan isn’t much interested in furthering the genre or bending it in new and intriguing ways, he’s perfectly happy giving his audience more or less exactly what they’re expecting. If that sounds largely antithetical to the notion of going to a horror film in the first place, you might have a solid point, but I suspect Wan cares not for your concerns.His method has made him more than a little successful and has allowed him to continue churning out these sorts of films in a steady stream. His is the kind of safe horror that you can rest assured won’t leave a mark when the lights come back on.