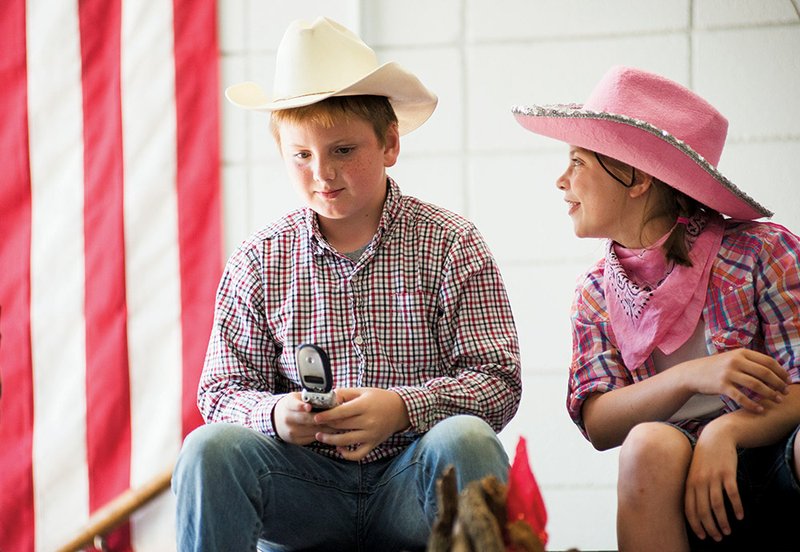 Hunter Newsome, left, and Mary Kate Tipton take part in the play Pecos Bill and the 7 Habits Ranch at Morrilton Elementary School. It was part of a program based on Stephen Covey’s book The Seven Habits of Highly Effective People. The program, The Leader in Me, is designed to teach students leadership skills.

“We are a Leader in Me school,” Wilson said, noting the elementary school’s status, along with Morrilton Primary School.

The Leader in Me program applies principles from the late Stephen Covey’s book The 7 Habits of Highly Effective People.

“One of my Facebook friends said her son, a first-grader, said, ‘Mom, we’ve got to be proactive and get our trash picked up before we can go out and play,” Wilson said. “Our kids know the language.”

Third-grader Hunter Newsome, 9, said the habits students are learning could be “very effective in your life and help you even when you’re older.

“Like putting first things first, … if you’ve got something really important, like a research paper, do that first instead of something that’s not for a grade.”

Wilson said the idea to implement the program was brought to the district’s attention by community leaders.

“Morrilton has a big group of people who want to improve this community,” Wilson said.

Their focus is on economic development, she said, because of plant closings that have occurred in the community.

“Back a year ago, some community members heard about The Leader in Me schools,” Wilson said.

She said they had read Covey’s book of the same name.

The district applied and received a Leader in Me grant, also receiving private funding from the South Conway Public School Foundation.

“They are wonderful to us,” Wilson said.

Sarah Ryals, treasurer of the foundation board, said $30,000-plus was given to the two schools, funded through the Nathan and Virginia Gordon Endowment.

In summer 2012, the staffs of Morrilton primary and elementary schools trained on the seven habits, she said.

“We thought it was stuff to learn to do for the school, but it was getting it in us so when we came back to school, we could teach it to kids,” she said.

“This year, we started out talking about the seven habits. We decorated the school some, put some posters up, did some cosmetic things saying, ‘You can be a leader,’” she said.

“Our kids know the language,” she said. “We talk about thinking win-win — how can we fix this situation?”

Wilson said that during a kickball tournament last week, she was talking to a teacher about a situation. She opened the door to step out, and two little girls rushed by her.

“They were almost running,” Wilson said. “A little boy said, ‘Now, y’all shouldn’t be running in this building — it’s not safe.’”

That student had been in her office more than once for discipline problems.

Wilson called his mother to brag on him.

The point of being a leader and doing the right thing can be made in many ways, Wilson said.

Another proud moment, Wilson said, was when she and other staff members took student ambassadors to the University of Arkansas Community College at Morrilton.

Wilson said an admissions counselor asked the students what they could do to ensure that they were ready for college.

“One of them said, ‘Well, you can be proactive and make good choices.’ Another one said, ‘You’ve got to begin with the end in mind.’

“They were having major conversations with her.”

Wilson said the UACCM counselor was impressed, and the educators were beaming with pride.

On May 24, Morrilton Elementary School held an event to show visitors the program.

It included a play — Pecos Bill and the 7 Habits , classroom visits to see leadership in action and a performance of the Mighty Pup Singers.

“We are looking to move the Leader in Me Initiative up to the Morrilton Intermediate campus so students who are here now will have that in their future,” she said.

Ryals said the foundation board has approved funding The Leader in Me program at the intermediate school, regardless of whether the district receives another grant.

“We’ll be funding all of it or a portion of it,” she said.