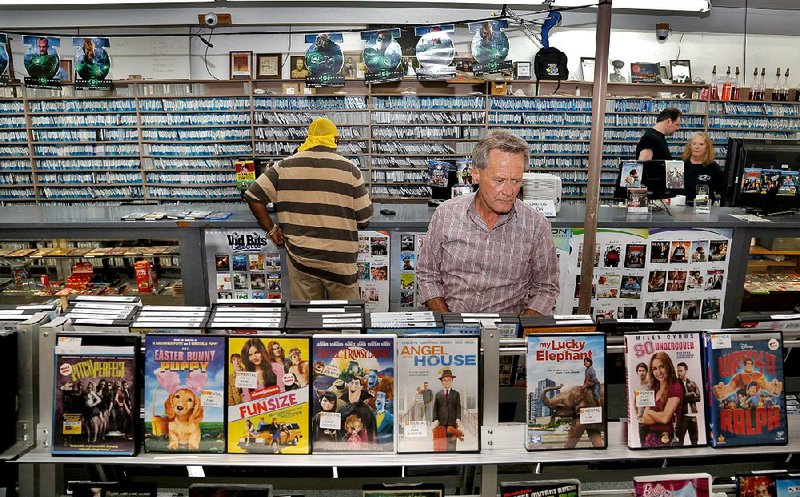 Correction: The Excelsior Hotel preceded the Peabody Little Rock. This article misidentified the hotel's name in 1984.

Even so, R.A.O. is a family place. And it’s a good neighbor, albeit in ways that may never be championed by the Downtown Little Rock Partnership or any neighborhood association.

Early on a Friday morning, Victor is at his computer, researching soon-to-be released films. He has even facial features and salt and pepper hair, which complement the computer science degree he no longer uses and the real estate license he still uses, because R.A.O. doesn’t offer a 401(k). He owns property as a retirement investment and this weekend, he and his wife, an accountant at Stephens Inc., will take their small sons on a cruise.

Victor’s childhood wasn’t about cruises, but he never minded. He hung out in the pool or the store, recommending movies and testing Nintendo games before they hit the shelves.

Once, in 1984, he told a man in animal-print boots that he should rent Runaway because of the cool, robotic spiders.

His uncle asked the man for his autograph and rang up a dozen videos, which Gene Simmons took back to the Peabody Little Rock hotel. That was how Victor learned about KISS.

“That’s because he’s in California, shooting a TV series,” volunteers Eric Woods, 43, who has worked at R.A.O. for 13 years.

Adult fare comprises about a quarter of R.A.O.’s roughly 20,000-title inventory, and in the pre-streaming era, the store had 15 employees. Now there are only seven, and the Olivers have diversified.

“We put in the head shop, which has been doing really well. We have the hair care. I provide what they need. They just pay to have a chair,” says Victor, referring to a salon next door. They also sell-shaved ices at the counter and used movies on Amazon.com. But rental customers are still their bread and butter, in part because R.A.O. caters to a specific demographic - and much of that demographic never makes it to the second floor.

At 8:20 a.m., a man shuffles in. His eyes dart around, checking for other customers. Eric is on the register. This is good. The customer, who has a traumatic brain injury, is skittish and easily confused. He deals only with Eric or Victor. He mumbles something that Victor overhears from the front office, 10 feet away.

“Charge what you want,” Victor calls. “Your credit’s good.”

R.A.O. doesn’t issue credit as a matter of course, but this man is an exception. “He comes in on the 3rd and pays it all off,” Victor explains. “We treat him fairly. We don’t charge any interest, and he knows that.”

Some R.A.O. customers are from nearby rent-subsidized apartments that house the elderly and mentally ill. These customers may not have credit cards or Internet access required by Netflix and Redbox. Others just enjoy chatting with their friends. For the most part, employees count their tenure in decades and know their customers by name.

In 1977, Robert read about a new technology in The Wall Street Journal. “You could film stuff and play it back on TV. You didn’t have to get it developed or edited by the government. To me it was a freedom. I’m not into censorship … if I want to film myself having sex and play it back on TV, that’s my business,” he says.

The article noted that Hollywood movies would soon be available on video. So Robert leased a 10-by-10-foot kiosk on Main Street for $200 a month and posted a sign for videorentals. He started with Beta tapes - five Westerns and five adult films, retailing for about $70 apiece. He also began to sell and rent video equipment. Low-end video cassette recorders went for $400, but he would rent them for $15 a day. Films rented for $5 each. Robert also had a 70-inch TV that businesses and Trekkie conventions would use for $250 a day.

But the public didn’t get it. So for five years, Robert operated a video education booth at the Arkansas State Fair’s Hall of Industry. He also offered powerful incentive. “Do you want to know the hottest video I ever had? The Orange Bowl, with Arkansas and Oklahoma [1978]. I copied it, and if I needed them to buy a VCR, I’d say, ‘Man, I’ll give you the Orange Bowl,’” he remembers.

A lot of people wanted to record football games, so R.A.O. outgrew the kiosk and moved to the Donaghey Building at Main and Seventh streets, and then, in 1991, to another Main Street location. In 2001, Robert bought his current building. He gave R.A.O. the first and second floors and converted the third to living quarters.

Robert’s family say he has “mellowed” over the years, but at 74, he still does shop maintenance work, bikes to the bank and entertains guests in his third-floor condo, which is equal parts bachelor pad and Playboy mansion.

There’s a sauna, low-light Jacuzzi, tanning bed, skylight atrium and row of vintage arcade games. There are also two pool tables, two projectors and extra bedrooms. But the furniture is sparse, the wall-to-wall carpet is worn, the beds are unmade and the kitchen is downstairs, at the back of the video store.

When Robert flips on a projector, the wall is flooded with a backyard pool scene, circa early ’80s. There he is, taut and barely middle-age, lounging on a chair in his Speedo while the neighborhood teenagers mill about, adjusting bikinis. It’s a frat-boy dream, except that Robert was never in a fraternity, because he never made it to college.

The oldest of six kids, he spent teenage summers picking cotton and running a projector at a movie theater. He graduated from Central High School just before the desegregation crisis, worked at the McCrory-McClellan dime store lunch counter during the Civil Rights sit-ins and traveled all over the country for Western Electric, converting telephone hubs from operator to automatic switching. Just three years ago, he won the Billiard Congress of America National Championship tournament in Las Vegas.

All of the Olivers are colorful. A sister founded the Little Rock Free Press, a brother started a sprinkler company and became a millionaire and another robbed a bar and was murdered in jail. According to Robert, the latter is why he takes on what Victor calls “Dad’s projects.”

Robert Oliver’s projects are actually people - friends who need a place to dry out, single mothers who need help with college, anyone who could use a break and a job.

Kathleen Tucker, 26, has run the head shop for about a year. It’s the first job she has ever kept.

“I was irresponsible, didn’t care. Now I’m in school, have my own place, my kids back in my life. I don’t know where I’d be without Bob helping me, making sure I stay on my feet and come to work every day,” she says. Sometimes Kathleen’s mother calls Robert just to thank him for watching out.

Kathleen beams, rises from her computer, tugs at her shorts and steps behind a glass counter full of pipes.“I love ordering stuff. It’s like going birthday shopping for yourself … I do as much research as I can,about the types of glass, how heat-resistant they are, where they’re blown at, what type of acrylic is in the middle.” As for the toys, “I try my best to make people feel comfortable … I let them know that nothing they say is going to offend me, shock me, make me laugh at them or judge them,” she says.

The morning has been slow. Kathleen sold three adult toys, and there was a trickle of movie customers.

By early afternoon, Kathleen is gone. Robert’s youngest sister, Nina Oliver, and her longtime boyfriend, Bryan Fooks, have arrived, as has Katina Williams, 33, who used to come into the store with her mother. Now she has worked here for 11 years. Nina has worked nights for 27 years, and Bryan, for 20.

Kathleen sprinkles something floral-scented in the carpet and vacuums downstairs, while George Neal, 55, a ballroom dancer and computer programmer, browses new releases.

“I have Internet at home - you can watch anything you want to, really - but you get better flavor here. The interactions with people, the whole ritual,” he says, taking in Nina, Katina and Bryan with a sweeping hand gesture. He has been a member for 13 years.

Around 5 p.m., there’s an afternoon rush, people just off from downtown jobs. They swarm the racks and form an eager line behind the shaved ice machine. Then, suddenly, the place is dead.

Katina opens her compact and applies powder, texts her friend about seeing Fast and Furious 6, checks the return box for movies that need shelving. Then she shakes her head and says, “Riverfest.”

“It’s going to be slow,” Nina agrees. “They’ll take up all the parking.”

A frantic would-be Riverfester dashes into the store, calling for a bathroom. “Y’all are the only place open, and it was an hour looking for parking and an hour in the car,” the woman squeals. Nina points her in the right direction.

When it’s slow, Nina usually cooks. But Robert opens the fridge, declares it empty, and calls in a pizza.

At 6:30, Katina makes the rounds upstairs, straightening displays and checking behind racks for stashed boxes. (Eric mentioned this phenomena earlier: “When I catch them I say, ‘We can reserve it, but we can’t have you hiding it.’”) At 7 p.m., Katina leaves. Nina and Bryan are here three more hours.

A homeless man spends a dollar in the arcade. Another homeless man changes coins for bills. A regular, Ray Fraizer, cashes his paycheck in the register - a privilege reserved for a few - and jokes about how he has been coming so long, he should get “picks,” like the employees.

A man named John Nova trails his 7-year-old grandson, Jayion, around the store. Jayion chooses Rio, World Wrestling and Tony Hawk, and John points to the hundreds of laminated snapshots lining the top of the wall.

“My son is up there,” he says.“I think we still have thatpicture at home.”

These photos are over a dozen years old. Robert used to shoot family portraits with the R.A.O. sign in the background, develop them across the street at the now-closed Osco Drug, post a copy on the wall, and give the customers an 8-by-10. He hoped they’d hang his advertising in their living rooms.

Another customer bursts in, nearly sideswiping Jayion and chattering breathlessly about his sister’s pregnancy, his half brother’s starring role in a Quentin Tarantino flick, his childhood in Miami, and by the way, did you hear, this guy got arrested? He’s everywhere at once, bouncing among the new releases, leaning intently across the counter.

When he leaves, Bryan says, “This is a low-key night for him.” Bryan isn’t being sarcastic, either.

A man in a cowboy hat hands Nina a gift, a roll of venison sausage, before melting into the racks.

Occasionally the doorbell chimes, signaling that someone wants to be buzzed upstairs.

A handful of teenagers parade through the shop, the girls skimpily dressed, with too much makeup.

A hipster couple, collectively attired in Pumas, a striped tee and a slouch-beanie, wander the aisles for an hour. They approach the register, Anna Nicole Smith’s bio-pic in hand. They also have an entire season of I Love Lucy, and they’re dismayed to discover that the five-disc collection rents for $10. Nina gives it to them for $5.

Then, just as Nina is about to total the register and close out for the night, the saddest woman in the world returns. She has been coming for years, and Nina has never seen her smile. Nor does she smile now. During the night’s first appearance, she talked movies with Nina. This time, she can’t get her ATM card to work. She thrusts a check across the counter, and Nina obligingly cashes it. It’s the last transaction of the night at R.A.O. Video - a Main Street bastion that is, in a myriad of ways, the last of its kind.