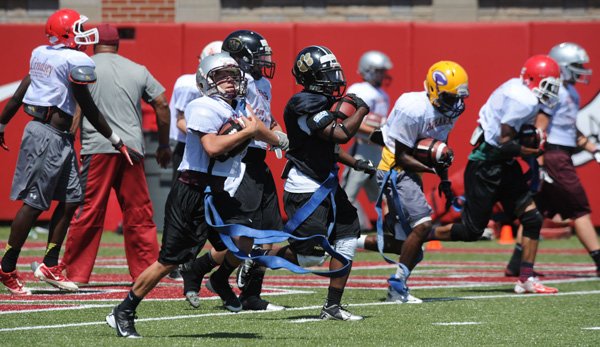 Campers participate in drills Monday during football camp at the University of Arkansas.

FAYETTEVILLE — Josiah Wymer planned to take an ice bath Monday night, figuring it might help take away some of the aches he felt.

After all, the Springdale High tight end had another long day of running, blocking and being scrutinized ahead of him.

The two-sport athlete has received plenty of interest from college football coaches heading into his senior season. But like other recruits, he wants to do everything he can to make a good impression and earn a scholarship offer.

Wymer (6-foot-3, 260 pounds) was among a large group of high school prospects who worked out Monday for Arkansas’ coaches at Reynolds Razorback Stadium.

He then left Tuesday morning and made a nearly 7-hour drive to Monroe, La., to take part in another football camp at the Louisiana-Monroe. He was expected to return home by around 2 a.m. today.

It’s all part of what has become a grueling summer grind for recruits, whose schedules quickly fill up with camps on college campuses.

“I don’t have the mentality of ‘Oh, I don’t want to do this two days in a row,’ because I love doing it,” Wymer said. “So, it’s just a mentality of ‘Hey, if they want me there, they must be interested.’

Some of the nation’s top recruits will get a scholarship offer without attending a school’s camp. These elite players don’t need to travel as much since college coaches tend to come to them.

However, players such as Wymer and Rogers Heritage quarterback Josh Qualls are spending the summer before their senior seasons attending as many camps as possible.

They want to show college coaches that they’re worthy of an offer.

That’s why Qualls was in Razorback Stadium on Monday, running the 40-yard dash and throwing passes alongside highly touted Charleston quarterback Ty Storey.

“I just look at it as an opportunity to go out there and be with the best guys in the nation,” Qualls said. “I don’t put much pressure on myself. I just go out and play my game and do what I can.”

Heritage defensive lineman Colby Isbell has accompanied Qualls as the two teammates have logged hundreds of miles to attend the same camps over the past few weeks.

As soon as they wrapped up a recent camp at Missouri State, they headed to the University of Memphis for another few days at a camp.

From there, Qualls and Isbell attended Heritage’s three-day team camp in Columbia, Mo., only to get home Sunday and be on Arkansas’ campus by Monday morning.

“I think we’ve lost 10 pounds each the past week just from going all over the place and not being able to have a consistent meal three times a day because we’re always on the road and always at camp,” Qualls said. “It does take a toll on your body.

“That’s probably what the hardest part about it is.”

Next on Qualls’ schedule: A camp at Arkansas State on Thursday.

The senior said he got good feedback about his performances at Missouri State and Memphis, and Arkansas Tech and Henderson State also have shown interested in him.

Wymer hopes to add to his college options as well. He said he has an offer from Arkansas Tech, but that number could grow with strong showings at camps this month.

Springdale coach Shane Patrick watched Monday morning as Wymer participated in drills with a handful of other tight ends at Arkansas’ camp. Patrick then made the trip to Louisina-Monroe with Wymer on Tuesday.

Patrick said he has seen a trend over the past five years for college coaches to hold off on offering a scholarship to a recruit until that player attends a camp in the summer.

“It’s probably getting more and more like that all the time,” Patrick said. “They want to see kids on their campus. They want to get to know them.

“With all the regulations that colleges have now, they want to make sure of who they’re getting. They want them on their campus, and they want to work with them.”

But going to a football camp costs money.

Patrick said a prospect must pay between $20-$60 to attend a camp since the NCAA doesn’t allow a player to attend for free. The player is also responsible for the travel costs it takes to drive to a camp.

“I don’t think they’re looking for a money-making deal,” Patrick said. “I think they’re just trying to make sure that they’re complying with the NCAA.”

Wymer said he has been invited to take part in a large number of camps this summer, but he has had to say no to some schools.

He can’t make every camp, though he was willing to attend those for Arkansas and Louisiana-Monroe on back-to-back days in the hopes of proving himself.