Kal-El, aka Clark Kent aka Superman (Henry Cavill), is an extra-terrestrial called to defend his adopted home planet against a Kryptonian criminal called General Zod in Man of Steel.

Infamously, many of the actors who have previously played Superman have experienced fearsome tragedies later in their lives. First, there was George Reeves (suicide), who played the man of steel on TV in the early ’50s; then, Christopher Reeve (spinal paralysis, eventual death by cardiac arrest), who played him in a series of films in the late ’70s and early ’80s; most recently, there was Brandon Routh (career irrelevance), who played a peculiarly inert version of him in Bryan Singer’s listless 2006 film Superman Returns. Because that film pretty much tanked at the box office, the next re-boot was pretty much inevitable and so it has come to pass. 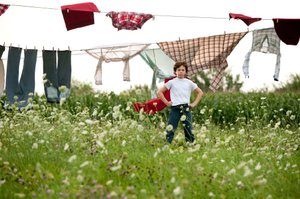 Our new boy in blue is Henry Cavill, a blue-eyed Brit whose previous best-known role was as the seductive Charles Brandon, a British duke in the time of King Henry VIII, in the cable series The Tudors. He is blessed with a chiseled face, extremely well-defined pectoral muscles and a brow that furrows well on command, all of which come in handy while in blue tights - though, to be more accurate, as with many things in Zack Snyder’s new vision,Superman’s traditional blue tights/red underpants combo has been replaced by a sleek, rubberized blue bodysuit.

The film begins on Superman’s home planet of Krypton, just as little baby Kal-El is being born to his doting, proud father Jor-El (Russell Crowe) and mother Lara (Ayelet Zurer). Shortly thereafter, we witness the worst 15 minutes or so in Jor-El’s life. First, Krypton’s lead scientist is rebuffed by the planet’s high council, who decry his warnings about Krypton’s imminent core destabilization and destruction; then, seconds later, he has to watch helplessly as this same council is taken over by the evil war general Zod (Michael Shannon), bent on relocating Krypton’s people and culture to a new, healthy planet; and finally has to put his only child in a special space pod and send him off to Earth just as Zod and his soldiers descend upon the couple’s observatory-like domicile.

Baby Kal-El eventually crash lands on a Kansas farm, where he is taken in by the kindly Kent couple (Kevin Costner and Diane Lane) and raised as their own. Kal-El, now dubbed Clark, must learn how to adapt to the sun, which gives him his tremendous powers that confuse and terrify him as a boy. By the time he’s fully grown, he’s living the life of the peripatetic drifter, trying odd jobs (crabber, bus boy, research expedition grunt) and unable to determine just what his purpose is meant to be. Fortunately, for Earth, he figures it out just as General Zod (now sporting a chin beard that makes him look like James Hetfield) and his remaining soldiers find their way to the planet and seek its total destruction for the greater glory and survival of Krypton.

Snyder, not exactly known for his subtlety, is the kind of inveterate visual stylist who would gladly add gathering storm clouds, flying debris, and galactic lightning bolts to your wedding pictures given the chance. He fills his frame with stuff, most of which is either squirming, glowing, or raining down destruction, but very little of it has any true visceral impact. He’s also not terribly concerned with pace, a shame since his $225 million, 143-minute would-be blockbuster loses a tremendous amount of coherence because of his impatience. Virtually every scene in the first two acts feels rushed and choppy, as if he simply couldn’t wait to propel us forward into the climactic battle scenes, which then go on to drag tiresomely in a shower of traded super-punches, computer generated nonsense and the endlessly crumbling buildings of Metropolis.

Worth noting: In 1980’s Superman II, Supes risks being labeled a coward by the gathered crowd when he realizes the battle he’s pitching against Zod (memorably played by Terrence Stamp) and his minions is putting the human population of the city at considerable risk, and flees to spare them. Here, he has no problem flailing away at his enemies, even as entire swaths of the city are laid to waste as a result. Perhaps, like Snyder, he just enjoys the look of desecrated concrete and twisted metal raining down on innocent citizens.

There also might be some significant casting issues. I might be able to abide by a Perry White (played by Laurence Fishburne) who sports a diamond-stud earring, and even a light-haired Lois Lane (Amy Adams), but Cavill is pretty much dead weight. He certainly has the muscles, resembling a mixed martial arts fighter more than an actor, but he brings precious little else to the role. He doesn’t have Christopher Reeve’s genial decency, nor any particular range - though, to be fair, even Olivier might have had difficulty spitting out lines such as, “You’re a monster, Zod, and I’m gonna stop you,” with a straight face. He’s angular cheekbones and a spacious pair of shoulders and little else.

Which takes us to David Goyer’s surprisingly bland and apathetic script. In the past, the screenwriter worked in some interesting elements, but Superman seems to remain perpetually square and two-dimensional, even as all these new treatments of him keep trying to bring more to the character. For all the money that was spent on the production, the screenplay feels awfully hacked together. Despite the occasional homage to past versions (the flying sound they use when Supe first masters flight is straight out of the old serial movies, and a disorderly trucker gets what he deserves) the whole thing feels like an exercise in blockbuster drudgery, a slightly darkened origin story we’ve all seen countless times before, and a script that has precious little new to offer.

Finally, and most damningly, the film is very little fun. The early, well-cut trailers suggest a film filled with a strong sense of Superman’s iconography and the need to add more human elements to his character tension, but such is not the case. It turns out Snyder is a lot more gifted with a billowing cape on an arctic glacier than he is with an actual flesh-and-blood hero. You’ll believe a man can fly and bore you to tears while doing it.