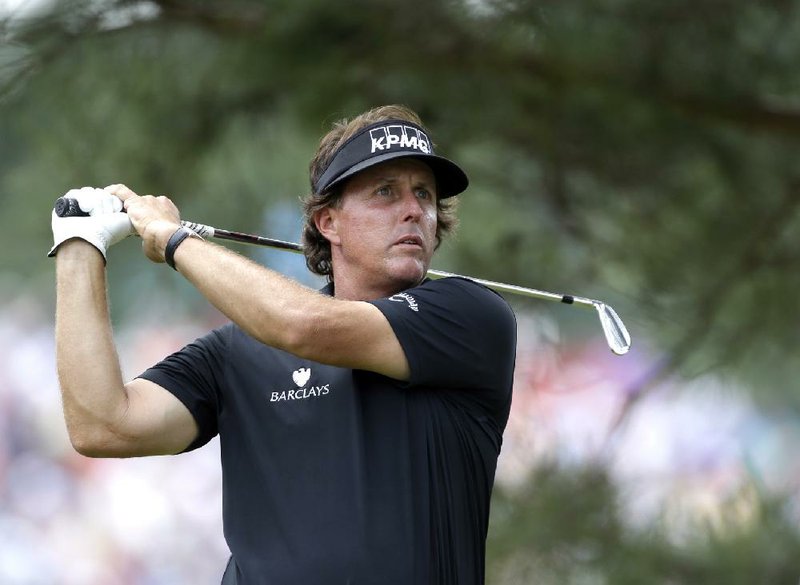 Phil Mickelson tees off with an iron on the 360-yard, par 4 eighth hole during the first round of the U.S. Open Thursday at Merion Golf Club in Ardmore, Pa. Mickelson did not pack a driver in his bag.

Mickelson left out his driver

ARDMORE, Pa. - About the only sure thing when it comes to Phil Mickelson and his golf clubs is that he carries 14 of them, as the rules stipulate.

It’s figuring out which 14.

Even though Merion can be long and tough at the start of the round, and it ends with a 521-yard hole, Mickelson decided not to carry a driver in the opening round. Instead, he had five wedges (including the pitching wedge). He raved about the “Phrankenwood” - his name for his hot 3-wood - at the Masters, but this was a regular 3-wood that he could still hit about 280 yards in the air. On the par-5 second, he was even with Keegan Bradley.

“I felt like there were potentially two holes that I might hit driver, 5 and 6,” Mickelson said. “I can’t hit it on 4 (a par 5) because it goes down on that side hill lie and it goes in the rough. I can’t hit it on most of the holes.

And I felt the 64-degree wedge out of some of the conditions would allow me to save a stroke here or there, more so than an extra 20 yards on 5 and 6.”

It worked. Mickelson opened with a three-putt bogey, and didn’t drop a shot the rest of the way.

Louis Oosthuizen wasn’t sure he would be able to play in the U.S. Open because his wife was expecting their third child this week.

Daughter Emma arrived on Friday and all is well - except for his golf game.

With the baby on the way, and a minor neck injury, Oosthuizen went 24 days without playing a full round of golf until a practice round at Merion on Tuesday.

“That was my first round after the Byron Nelson,” he said after a 75. “It was frustrating that I couldn’t prepare properly. The mistakes I’m making are stupid. The way I played it feels more toward an 80.”

Oosthuizen said his neck still bothers him, but not when he’s hitting the ball.

“It’s more after hitting, when I’m walking,” he said, adding that he had no pain.

As for his family, Emma weighed in at 7 pounds, 7 ounces. Oosthuizen, the 2010 British Open champion at St. Andrews, has two other daughters.

The heavy rains early in the week washed away plenty of practice time for golfers at the U.S. Open, a tough situation since few had an opportunity to get familiar with venerated Merion Golf Club beforehand.

Not that Jerry Kelly was complaining.

Not after opening with an even-par 70 on a day interrupted again by a 3½- hour rain delay.

Kelly admitted a lack of course knowledge left him scrambling on more than a few occasions to choose the best line for approach shots.

He got in only one 18-holepractice round because of a steady downpour early in the week, and he skipped Wednesday altogether.

For all that, his only real breakdown came at No. 18, where Kelly made a double bogey. On the plus side, Thursday’s lengthy delay gave him a chance to catch up on his movie-watching, in this case “The Master,” starring Philip Seymour Hoffman.

“It’s a pretty darn good movie,” Kelly told reporters after his round, doing double-duty as a critic. “You should rent it.”

Bubba Watson’s ball was in the rough and he had some time to think about his next shot.

Phil Mickelson dozed off during the break in his round. So did Keegan Bradley. Charl Schwartzel played Angry Birds on his iPhone.

For the early starters Thursday at Merion Golf Club, rain interrupted play at 8:36 a.m., forcing a scramble for the clubhouse.

Mickelson needed the extra sleep. He flew overnight from San Diego after watching his oldest daughter’s eighth-grade graduation, where she was one of the featured speakers.

He slept a few hours after landing at 3:30 a.m. and took another hour nap during the delay.

Watson, the 2012 Masters champion, put his time planning his way out of the rough to good use.

“Somehow, I made par on that hole when I came back out,” said Watson, who shot a 1-over 71. “The break actually helped me. Now, I can go back and watch the NBA game and be able to sleep in.

I wasn’t sure if I was going to be able to stay awake that whole time.”

Phil Mickelson likes to give golf balls away to children in the gallery when he changes to a new ball.

At one hole, he smiled and tossed it to a 7-year-old girl with blonde hair. Her name was Isabella Stricker, and if the last name sounds familiar, it should - it was Steve Stricker’s daughter.

… Cory McIlyea had a rude welcome. He had three double bogeys and no birdies in his round of 81.