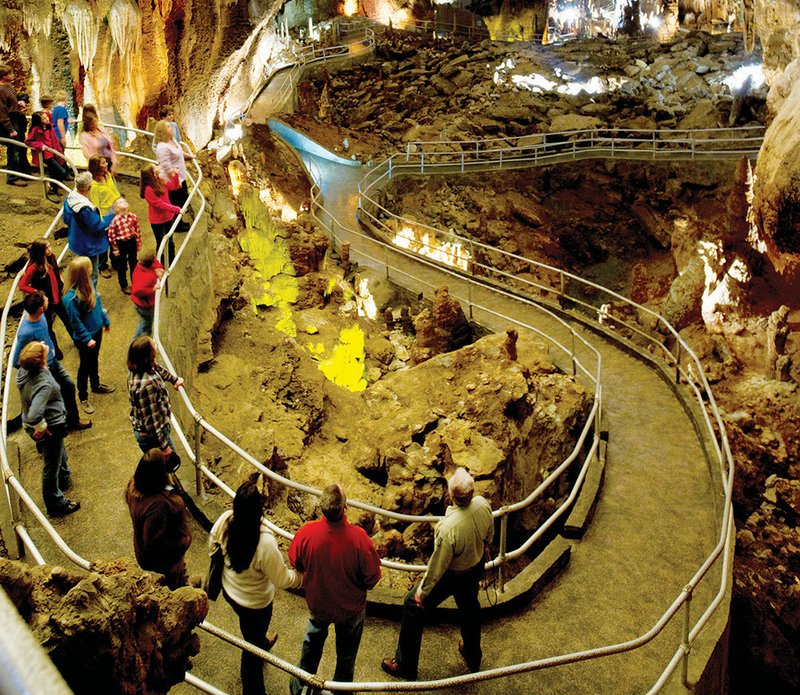 Spectators get quite a view as they wind down the walkways on a tour of the Dripstone Cave at Blanchard Springs Caverns.

FIFTY SIX — When the U.S. Forest Service opened Dripstone Cave to the public at Blanchard Springs Caverns on July 7, 1973, Robert Handford was one of the first people to set foot in the cave.

“I was 17 and interested in caving,” he said. “Since 1955, Hugh Shell and Hail Bryant had been exploring what is now called Discovery Cave. That cave’s only known entrance was down a 65-foot vertical shaft. In 1963, they took me and my cousin in to explore Discovery.”

Standing on the cave floor, their only light was the carbine lamps on their hard hats. Shell looked up into a crevice and noticed some reflector tape. He asked the boys to check it out.

“We climbed up the crevice,” Handford said. “Past the tape, it was very clear how to go on up. It was steep and narrow, but there were good hand and foot holds. Suddenly, the crevice opened onto a black void. I knew I was in a larger space, but we had climbed up from a huge room below. I couldn’t imagine there could be another large cave above us.”

The room he entered is now called the Cathedral Room. The ceiling is more than 100 feet high.

“By the time all four of us got up there, our lamps lit up the space better,” he said. “We were yelling and screaming, all excited.”

They explored as far as they could, first in one direction, then the other.

“We could see some of the stalagmites dimly,” Handford said. “End to end, it’s about a half-mile walk, but the most spectacular half mile I’ve ever seen. What impressed us most was the overwhelming size of the rooms and the decorations, which are unparalleled. To this day, Blanchard Caverns stands out for the sheer volume of formations and the sizes of the stalactites and stalagmites.”

The caves were in the Ozark National Forest in Stone County, so after a few more exploration and photo trips, Shell told the forest ranger what they had found. Soon after that, the Forest Service closed both caves to cavers. After 10 years of planning and development, which included blasting a tunnel, putting in cement walkways and installing an elevator that drops 216 feet, the Dripstone Tour opened.

According to the Blanchard Springs Caverns brochure, “The Dripstone Trail travels through two huge rooms of crystalline formations, flowstone and columns.” In 1977, the Forest Service opened the 1.2-mile Discovery Trail in the cavern below. It is 366 feet below ground level and follows a path along the cavern stream.

In 2001, the Wild Cave Tour opened by reservation only. Here, cavers climb steep slopes and crawl on their hands and knees, inching along through red clay.

For the past three years, Ann Sarnecki has been the caverns manager. Last fall, she began planning the 40th Anniversary Celebration with the Mountain View Chamber of Commerce, local newspapers and current and previous staff.

The biggest event, Blanchard Fest, was held Saturday at the aboveground amphitheater in the day-use area.

“Dignitaries from around the state [spoke] about how the caverns bring people here to appreciate the beauty of nature,” Sarnecki said. “We [had] food and family activities like a petting zoo, chain-saw carving, an old fire engine.”

Several other events will be held in the day-use area. A Collared Lizard Field Trip will take place June 26.

“These are big fat lizards,” Sarnecki said. “Jessica Wakefield, our biologist, will present a program on how the lizards relate to forest management. For instance, our fire program cleans out the undergrowth to preserve the original glades. One of the critters that lives in glades is the collared lizard. Then we will take buses to City Rock Bluff, where it’s easy to find collared lizards.”

More than 40 years ago, local musicians often played and sang in the shelter cave in the day-use area. Today, the Ozark Folk Center will host a concert and jam session highlighting that cave’s musical history and demonstrating the cave’s amazing acoustics.

“Originally, the day-use area was called The Land of Crossbow,” Sarnecki said. “Local people used it for archery practice. On July 6, students from Mountain View High School will put on a crossbow display. We’re also working with [the Arkansas Game and Fish Commission] to set up archery targets.”

Events inside the caverns will include Living History Tours on Thursday through Saturday.

“The early explorers and cave workers or people representing them will be stationed along the cave tours,” she said. “They will talk about discovering the caves and how they were opened to the public.”

Sarnecki said staff member Phillip Walrod, a professional photographer, led a photo tour on May 30 on the Discovery Trail and explained how to take good photos in the cave.

A flashlight tour of Dripstone will be held June 28.

“We want to make Blanchard Fest and the 5K Run/Walk annual events,” Sarnecki said. “In the future, we want more photo tours and to find different ways to have concerts in the cavern. With help from Game and Fish, we want to recreate an archery activity in the day-use area.”

Sarnecki said the new Blanchard Learning Experience is designed for the federally mandated core curriculum. Currently, BLE is for sixth through eighth grades, but she expects it will be adapted for older students and adults.

“About 60,000 people visit the caverns each year,” she said. “Our goal is to have a continual base of 100,000 visits a year. To serve that many people, we would have to be open more hours or do tours in a different way. We are very concerned about not doing damage to the cave. People just walking and breathing has an impact on the cave ecology. With any natural wonder, there must be a balance between visiting and preserving. People can ‘love a place to death.’”