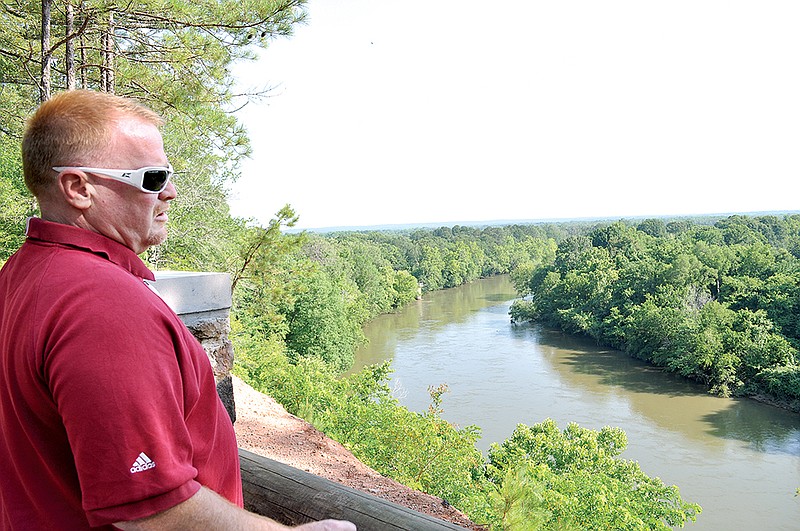 Mike Volz, director of the Arkadelphia Parks and Recreation Department, tells some of the history of DeSoto Bluff, which overlooks the Ouachita River. Arkadelphia has built a paved road off North 10th Street (U.S. 67) to a small parking lot. From there, visitors can walk down a broad paved path to DeSoto Bluff.

Clark County residents like to believe Hernando DeSoto and his men camped along the Ouachita River on the bluff that now carries his name, but Arkadelphia City Manager Jimmy Bolt said he’s been told historical research does not support the story.

“It has been a story that has been told around here for a long time,” he said, “so the name’s stuck, and I won’t be the one that says it’s impossible.”

It is known that in 1804, Americans George Hunter and William Dunbar made their way to the bluff during their journey to find the “boiling springs” as part of President Thomas Jefferson’s Grand Expedition of Discovery. The same presidential orders sent Lewis and Clark across the continent to find what was in the new land obtained in the Louisiana Purchase.

Arkadelphia Parks and Recreation Director Mike Volz said he believes the bluff, along with the natural clearing that faces the river, was a gathering place long before Europeans came to the continent. DeSoto Bluff is a place Arkadelphians have always known about and used.

“I remember being right here,” he said, pointing where a paved path comes near the bluff. “I was throwing mud balls at my friends. I also remember a fraternity ceremony held here one night while I was at Henderson [State University], but I can’t talk about that.”

Volz said the many Arkadelphia residents and college students knew the “secret way” to the bluff.

“In the early 1980s, what is now a car dealership was a gas station,” he said. “There was a path behind the station that led to the bluff.”

The secret is certainly out now. Using grants from the Arkansas Game and Fish Commission, the Arkansas Humanities Council and the Department of Arkansas Heritage totaling more than $80,000, the city has built a paved road off North 10th Street (U.S. 67) to a small parking lot. From there, visitors can walk down a broad paved path to DeSoto Bluff.

A stone and wood barrier now runs along sections of the bluff area, but there is little to keep people away from the edge that stands about 120 feet above the Ouachita River.

“We have a sign warning people that the bluff is not completely blocked off, and I don’t think people would want it to be,” Bolt said, “but we have cautioned parents to keep a close watch on their children.”

Mike Reynolds, chairman of the department of kinesiology and leisure studies at Ouachita Baptist University, has led many expeditions of school-age children to the bluff to study the landscape and learn more about the history and nature around the embankment. During one trip last year with fourth-graders from Peake Elementary School in Arkadelphia, he said the bluff makes a great classroom.

“The area has marvelous views of the Ouachita River, the pine woods of the Gulf Coastal Plain to the east and south, and the Ouachita Mountains to the north and west,” Reynolds said. “It is easily accessible, yet you get the feeling of being in the woods.”

The grants, obtained by Deborah Sesser, the city’s director of grants and research, will provide interpretive signs along the path and at the bluff area, providing information about the nature and history of the area.

“I would also like a kiosk with information and an area to hold classes,” Bolt said.

At the southern end of the newly developed area, a natural trail leads into the woods. Park Director Volz said it links with the Feaster Trail, a paved and lighted trail that runs through the city and is used by hikers and bicyclists.

The popular spot, which had been on private property, was most recently owned by Ouachita Baptist University until being acquired by the city of Arkadelphia in a 26-acre land swap.

In 2010, the city looked at building a museum near DeSoto Bluff. The city proposed a history museum that would cover the history of the area from pre-Columbian cultures through the 1800s. However, a lack of funds and other city priorities stalled the idea.

Bolt said the area is open, but an opening ceremony will be held later.

“There are no road signs up, and the interpretive signs aren’t in yet, so this is a soft opening for now,” he said. “Word will get out that people can come here a lot easier now.”