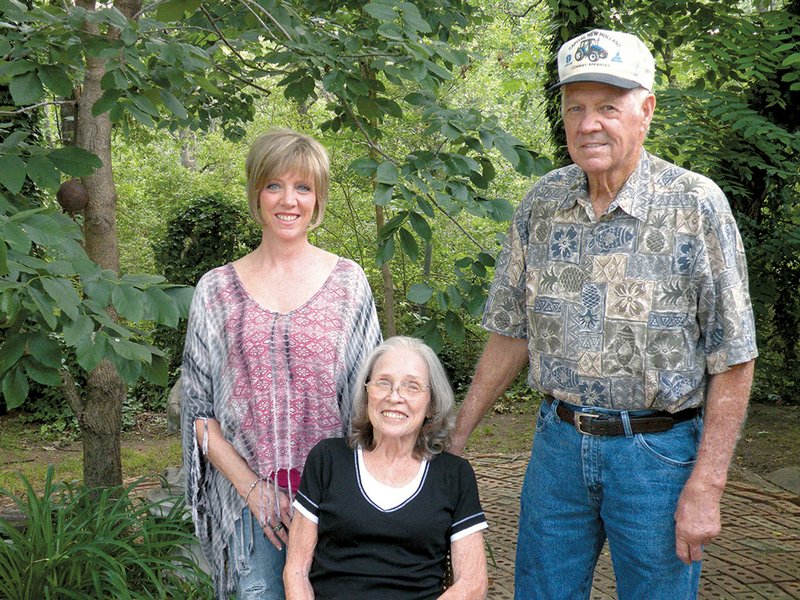 The Billy Lon Harrell family of Mayflower has been named the 2013 Faulkner County Farm Family of the Year. Family members include, from the left, Tracye Hoggard with her parents, Wilma Jean Harrell and Billy Lon Harrell. Not shown is the Harrells’ son, Kelly Lon “Lucky” Harrell. ( Carol Rolf )

Billy Lon Harrell, 82, of Mayflower said he’s “no spring chicken,” yet he goes to the farm every day to check on his crops, something he’s done for the past 50 years.

Harrell and his family — his wife, Wilma Jean, 81; daughter, Tracye Hoggard, 48; and son, Kelly Lon “Lucky” Harrell, 45 — have been named the 2013 Faulkner County Farm Family of the Year.

“My future plans include passing down my family farm to my son and daughter,” Billy said. “I will do this to ensure that the values of farm, responsibility and agriculture will remain.”

The family also includes three grandchildren. Tracye, who is a registered nurse, and her husband, Mark, have a son, Bryce, 23, who is married to Katie and is pursuing a career as a master electrician; and a daughter, Summer, 20, who attends the University of Central Arkansas. Lucky has a son, Kaden, 7.

Billy grew up farming in Cato, the son of the late Ralph R. and Lilly Mae Bass Harrell. “My dad was the first one to farm rice in Faulkner County,” Billy said. “That was back in the ’50s. I don’t grow rice, only beans and wheat.”

“After I graduated from high school, I started a partnership with my father in 1951,” Billy said. “We farmed cattle and raised silage and put it in silos to feed our cattle from there. We raised the rice, and then soybeans followed. In 1974, I took over the farming operation full time.”

Wilma graduated from Jacksonville High School. Her parents were farmers as well.

“We raised everything,” she said. “We had peanuts, potatoes, cotton — all row crops. We also had milk cows.”

The family lived in the Olmstead community.

“When partnering with my father on the farm, key choices and decisions were not for me to make,” Billy said. “Since taking over, I have had to decide the what, when and how of haying and row crops.

“I have visited [Faulkner County Cooperative Extension Service] agents over the years to gain the knowledge to make these decisions and choices based on research and experience.”

He said he has worked to control erosion; keep drainage ditches clear to allow for free movement of water; irrigate when possible; and control weeds.

“My son helps me on the farm,” Billy said. “I couldn’t do it without him.”

Wilma, who retired from FMC, has been a member of flower and garden clubs.

The couple played slow-pitch softball up until their mid-60s. Billy has enjoyed rabbit hunting and fishing all of his life, and he continues to cook fish for special occasions. He prepares fish every year in Gillette as a benefit for the volunteer fire department.

As a young man, Billy said, he had a chance to try out for the Detroit Tigers baseball team.

“My mom wouldn’t sign the papers for me to go,” he said. “Since I was on farm deferment from military service, she was afraid I might get called to duty. That was back during the Korean War.”

Billy said he is “not much up on rewards and all that, but I think if they want to honor us as Farm Family of the Year, that’s great. But I’m sure there are others who are more deserving than I am.

“My mother always told me, ‘A man is no better than his word,’ and I’m a firm believer in that. That’s how I’ve tried to live my life.”