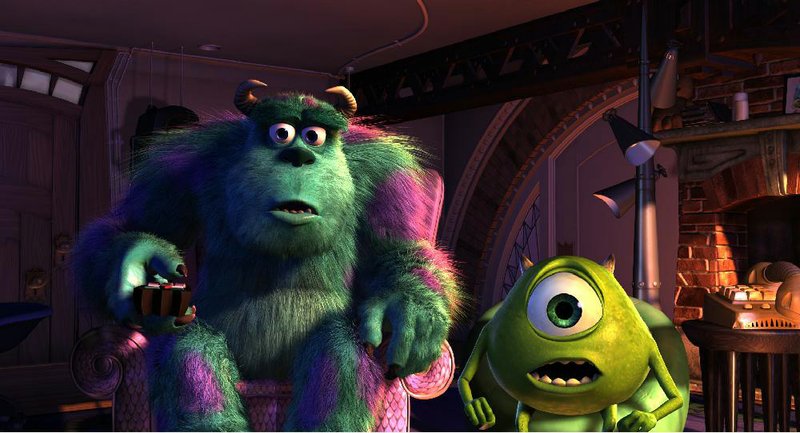 Pixar’s Monsters University fills us in on the school days of Sully (voice of John Goodman) and Mike (Billy Crystal), before they became champion frighteners.

Monsters University is loaded with delightful moments, endearing characters and minute visual touches that let viewers know that the folks who made it approached their work passionately.

Nonetheless, a Pixar Animation Studios movie seems to be a letdown if it’s merely enjoyable. Because Pixar is responsible for Up, Ratatouille, The Incredibles, Wall-E and all three Toy Story movies, they’ve created unrealistically high expectations for each subsequent film.

Then again, if all my disappointments were this entertaining, I could die a happy man.

In this prequel to 2001’s Monsters, Inc. viewers learn how Mike Wazowski (Billy Crystal) and James Sullivan (John Goodman) grew to be the top scarers for Monsters, Inc., the company that creates power for the entire monster world by frightening human tots in our own dimension.

If you’ve seen the previous movie, you know that Mike and Sully have become the kings of their trade, but they had to learn how to hone their skills. The odd thing is that college almost kills their careers before they begin.

Mike is a committed student and knows all the techniques a skilled frightener should have. Sadly, the green, one-eyed fellow who resembles a beach ball with arms and legs looks more cuddly than terrifying. He resents having to share a classroom with Sully, who comes from a long line of famous scarers. Sadly, Sully, despite having a large build and a deafening roar, has no ambition to speak of, save for coasting on his surname.

Unfortunately, the intimidating Dean Hardscrabble (Helen Mirren) kicks them out of the elite scaring program. To live their dreams, the two reluctantly team up with a nerdy fraternity to enter a scaring contest to prove they’re worthy to traumatize human children.

The story line seems curiously padded and predictable, which is an unusual deficiency for a Pixar film. More care seems to have gone into some admittedly funny gags (a two-headed student arguing with himself is looking for volunteers for the debate club) than into the tale as a whole. As a result, it’s harder to connect with Mike and Sully than it was the last time around.

This is despite the fact that the animation technology has improved by leaps and bounds since 2001. Now all the monsters have skin that looks biological instead of rubbery, and the trees and other background images look frighteningly convincing.

With Crystal and Goodman in the leads, the laughs still come frequently, but the warmth that comes with the better Pixar films is in curiously short supply.

Monsters University opens with a delightful short, The Blue Umbrella, which is strikingly similar to last year’s Disney hit Paperman. This story has two umbrellas, one blue and the other red, with anthropomorphic faces falling for each other in a sea of black umbrellas. What makes this film charmingly unique is that every object, even a gutter or two, manages to come alive during the course of the film.

To be fair to Monsters University, its plot line is almost identical to that of The Internship, but the cartoon is not only more entertaining but more realistic.