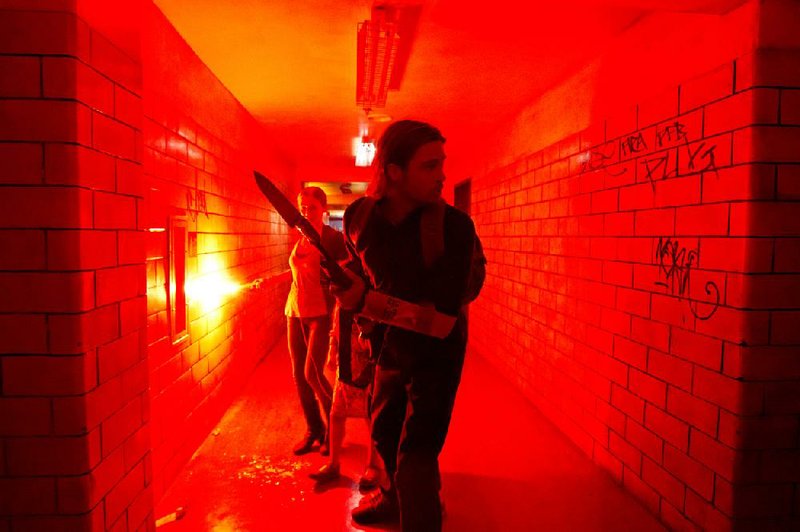 Red alert: Gerry Lane (Brad Pitt) has to protect his family, including his wife, Karin (Mireille Enos), and save the planet in World War Z.

Like the whippet-fast zombies themselves, nearly everything in Marc Forster’s apocalyptic undead thriller moves quickly. In this season of bloated, big-budget, extended-length blockbusters, this is not at all a bad thing. Scenes move crisply and intelligently from scenario to scenario without getting unnecessarily bogged down in exposition. Forster’s vision is dark and affecting, but not so infatuated with itself that he wants to linger on a single moment any more than the story calls for.

Based on a novel by Max Brooks, World War Z begins in Philadelphia, where loving family man Gerry Lane (Brad Pitt) is busy making pancakes for his wife, Karin (Mireille Enos), and two adorable daughters. Approximately five minutes of screen time later, the four of them are running for their lives down a busy city street, a horde of churning zombies rapidly giving chase. The family escapes in an RV but get trapped in Trenton, where the zombies have already taken over (must. refrain. from. making. obvious. New. Jersey. joke … ). They are eventually rescued by a United Nations helicopter; as it turns out, Mr. Pancakes is actually a former crack investigative agent for the organization, which now desperately needs him to track the origin of the virus as it quickly spreads across the globe.

His family now safely ensconced in an aircraft carrier somewhere in the north Atlantic, Gerry heads out with a team to South Korea, where the virus is believed to have been first discovered. In the course of his investigation, Gerry is led to Jerusalem (the Israelis, not surprisingly, were better prepared than most to repel unwanted invaders) and then somewhere in Europe via a crash-landed plane to visit a World Health Organization station where he attempts to solve the riddle of the virus.

Make no mistake: Despite the trailer’s indication otherwise, this isn’t a mindless action flick; it’s an absorbing contagion mystery, albeit one with a racing clock in its backdrop. In fact, instead of a fierce, bloody showdown between man and undead, the film’s climax is all about unlocking a major biological mystery, leaving the actual war against the zombies for another movie. Despite its genre conventions, there is a stately vibe to the film’s maneuvers. It’s not a slapped- together cartoon, it’s a well-constructed, carefully articulated thriller that has, dare I say it, a slightly more adult audience in mind.

Forster, a careful director whose previous films (including Quantum of Solace and The Kite Runner) have tended toward the refined and atmospheric, doesn’t let a single element of his film go to waste. The simple act of opening an airplane hangar door becomes a harrowing, tense moment in a stream of such anxieties. With cascading rain, swirling snow and floating dust motes, the director, along with his cinematographer, Ben Seresin, give the film a fetching, tactile grace.

Part of the film’s effectiveness - its speed - is, in a nicely orchestrated bit of thematic linkage, very much also the point. When a crisis hits, you are either able to quickly assess and adapt to your new circumstances, or you are among the first to be dragged under. Gerry is able to protect his family precisely because he doesn’t get hung up on the obvious questions. Rather than waste valuable time wondering why something is happening, he takes forceful steps to get his family to safety. Because the film spends time exploring this idea (Gerry’s trip to Israel, with its echoes of the victims’ initial disbelief of the Holocaust, becomes particularly illuminating), it allows Forster a certain amount of wiggle room with respect to his narrative: We simply don’t have time to figure everything out, so we don’t have to try to. All of us are on a need-to-know basis.

The cast is also well orchestrated. Pitt, with his beard and stringy, shoulder-length blond-flecked hair going almost full Cobain, is one of the few living Hollywood actors whose mere presence in a film can add to its heft: If he appears in it, it automatically becomes more of an event. He manages to portray his character’s tenderness toward his family with effective conviction, even given the few scenes they share before he’s whisked off.

Pitt’s obviously no slouch, but he’s hardly alone. Even relatively small parts are judiciously filled - James Badge Dale does a splendid turn as a military captain on a base in South Korea, even though he’s only on camera a few minutes; David Morse plays a rogue CIA agent behind bars who plays his part with such nervy gusto you’re afraid to look anywhere else; Pierfrancesco Favino plays the director of the beleaguered WHO outpost with memorable concern. No role is a throwaway.

As sharply as it has been conceived, it’s not entirely without its faults. Though its streamlined brevity is often a strength, the film scrupulously avoids giving us any kind of explanation for the outbreak, even in its denouement, which feels like a bit of a cop-out; the climax, though appreciably downplayed, still feels like the prelude to something a bit more extravagant that never comes. At times, the film still makes pretty audacious and horrific moves and then doesn’t bother to register the emotional counter punch to justify them. But these are pretty forgivable sins for one of the few big studio films of summer 2013 that doesn’t feel as if its script was written in crayon on a syrup-stained IHOP napkin.