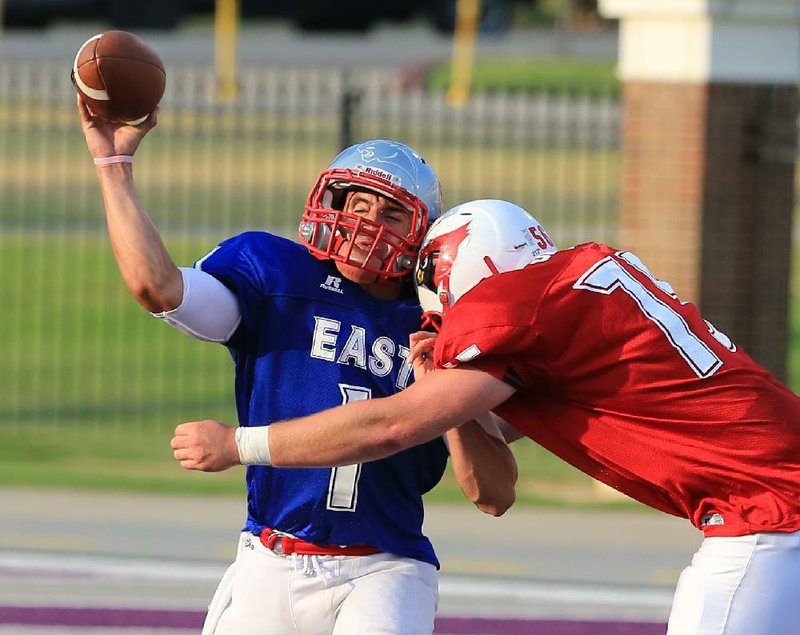 Arkansas Democrat-Gazette/RICK MCFARLAND --06/21/13-- The East's Sterling Stowers, Highland, is hit as he releases a pass by the West's McKinzie James (75), Camden Fairview, in the East West All Star football game at UCA Friday.

CONWAY - The West capitalized on an unforced error.

Lucas Reed of El Dorado threw a 21-yard touchdown pass to wide receiver Vincent Love of Hope with 27 seconds remaining to give the West a 16-13 victory over the East in the Arkansas High School Coaches Association All-Star football game Friday night at the University of Central Arkansas’ Estes Stadium.

Before an announced crowd of 3,750, Reed, a Ouachita Baptist signee, drove the West 89 yards in 12 plays for the winning score.

“It was a defensive game,” West Coach Tony Travis of Pea Ridge said. “It came down to a couple of possessions and execution at the end.”

Leading 13-9, the East was poised to put away the game but couldn’t convert on firstand-goal from the 2 in the final four minutes.

Two of the four plays were botched because of poor Shotgun snaps. All-Arkansas running back Martin Stafford of Jonesboro was also held to 1 yard and no gain on the other two plays.

Stafford was named the game’s MVP after rushing 16 times for 78 yards.

On fourth down from the 1, the second botched snap resulted in an 11-yard loss and opened the door for the West with 3:17 remaining.

“That’s All-Star games,” said East Coach Roddy Mote of Harding Academy. “It was unfortunate, but it was agood week.”

Following Reed’s touchdown pass, the East had a final opportunity to tie, but a 52-yard field-goal attempt by Lane Campbell of Jonesboro Westside was short and wide left as time expired.

Stockton Mallett of Yellville-Summit was named the game’s top lineman, and West teammate Clay Patrick of Springdale was the top defensive lineman.

East cornerback Shaquille Hunter of Junction City wasnamed the game’s outstanding special teams player, while the East’s McKenzie Jones of Riverview was chosen as the top defensive back.

The East carried a 13-9 lead into the fourth quarter after a 2-yard touchdown run by Rashaad Earls of LittleRock Parkview with 2:07 left in the third quarter.

The West had taken a 9-6 halftime lead on a 24-yard touchdown pass from Reed to wide receiver Malachi McGee of Mena with 12 seconds left in the half. The touchdown came two plays after nose guard Zach Garrett of Magnet Cove intercepted a tipped pass on an attempted middle screen.

The East took a 6-0 lead on a 27-yard touchdown pass from Sterling Stowers of Highland to wide receiver Will Duncan of Little Rock Christian with 4:53 left in the first quarter. On the play, Stowers rolled right and floated the pass to the back of the end zone, where Duncan made the catch just inside the end line.

The West cut the lead to 6-3 on a 40-yard field goal by Nick DeLeon of Pea Ridge with 25 seconds left in the first quarter.