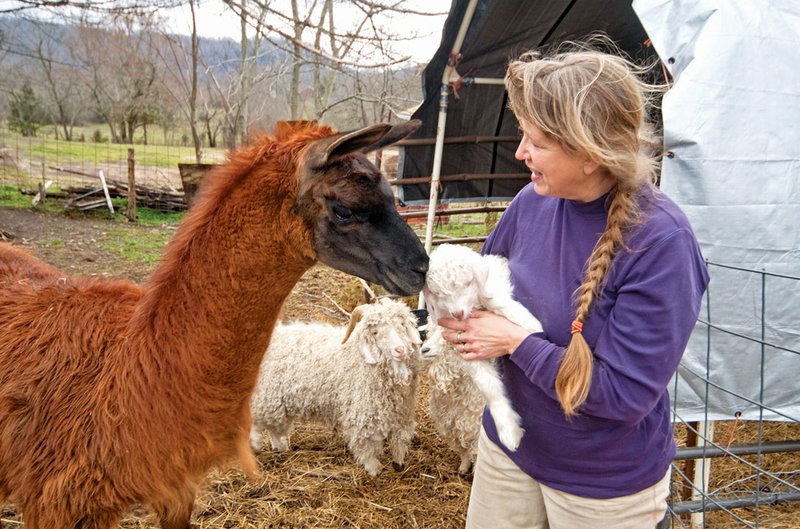 Jeanette Larson holds a baby Angora goat as a protective llama checks to make sure the baby is unharmed. Larson uses the fleece from her 21 sheep, eight goats and a llama to weave and crochect projects she sells online under the name Common Threads.

When Jeanette Larson of Mountain View goes to feed her herd of 21 sheep, eight goats and a llama, she can call each one by name.

She can speak to the animal’s individual personalities, too, from stubborn and feisty to dramatic and needy. The majority of the group are Jacob breed sheep, with a few cross-bred sheep and Angora goats mixed in.

Larson has been raising Jacob sheep since 2000, selecting the breed for its multicolored fleece and easy-to-spin wool. Twice each year, Larson sheers the goats and sheep on the farm to use their fleeces in her spinning, weaving and crochet projects. She sells her items online at Etsy.com under the name Common Threads.

On March 30, Larson will hold a Sheering Day Open House at the farm.

“It’s a chance for people to meet the sheep,” Larson said. “People love knowing the names of the sheep and their story.”

One customer on Etsy bought all of the yarn that Larson had put up for sale from Nilly, a sheep who was born blind. Descriptions of the hand-woven wool rugs Larson sells on the site come with a description of the sheep or goat from which the materials came.

“Nessie, as she is known around the barn, is bossy and energetic,” Larson wrote for a fuzzy tri-colored rug for sale. “She knows she’s a princess.”

The wool going from the sheep or goat to a rug or hat is a long process that Larson takes on entirely by hand.

Each spring and late summer, she hand-sheers the fleece-bearing animals on the farm, bringing them one by one to a sheering stand.

“I used to use electric shears, but I like the fleece better when I use hand shears,” Larson said.

After she won an award for her hand-sheared fleece in 2003, she hasn’t gone back to electric.

Once her 1929 Newcomb Loom has a warp on it (a tedious process of winding yarn back and forth between tiny teeth to create a foundation for the rug), Larson can make a small rug in an hour or two.

To make it easier to handle, Larson doesn’t wash the wool until the rugs are finished.

“The first wash is in the bath,” Larson said. “It’s like grape stomping, barefoot. Once it starts to felt, I put it in the washing machine six or seven times.”

In addition to the large Newcomb Loom that she works rugs on, Larson has a large triangle loom on the wall for making woven shawls that take around 10 hours each to complete.

For the shawls, Larson uses yarn that she spins, and occasionally dyes, right in her living room.

Scattered among the room’s chairs and TV are three spinning wheels and a large stack of movies.

“I spin a bobbin full and then another and ply those together,” Larson said. “Each bobbin takes about two hours, or the length of one of those movies.”

Plying, or twisting the strands together, takes another hour, so each hank of yarn takes about five hours apiece.

“You can get five to eight hanks out of a fleece, so you want the fleece to be something you want to handle for 24 hours,” Larson said.

Most of the yarn that Larson sells is its natural color, but she’ll occasionally use dye.

“Mohair [from the Angora goats] goes the fastest,” Larson said. “I have a hard time keeping it in stock.”

From the spinning wheel, the yarn is placed in bags in the freezer until it’s ready to be shipped. The cold helps keep moths away. So far, Larson has made sales of her rugs and yarn as far away as Washington state.

In addition to her work on the farm, Larson works at the Ozark Folk Center as craft director. It’s a hectic life, but Larson wouldn’t be quick to give up her shepherding ways.

“The best thing is taking care of them every day,” Larson said of her sheep and goats. “Getting out there with them is like my meditation.”