Former Hog commit Dederick Lee and his pack of siblings have had quite a run at Clarksville High. Could another one be around the corner? by Evin Demirel | March 7, 2013 at 4:32 p.m. 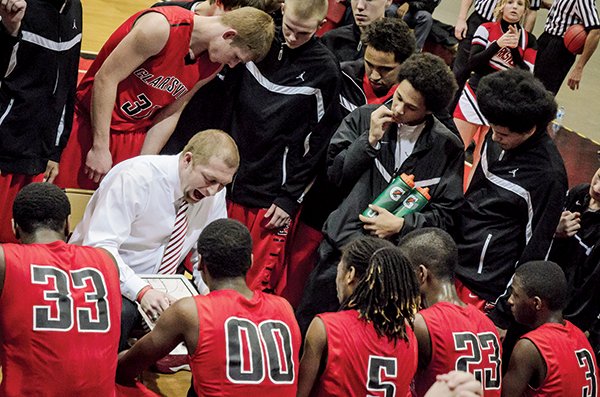 Brothers Kenderick Lee (no. 5), Dederick Lee (no. 23) and Freddy Lee (no. 3), listen to Clarksville coach Tony Davis during the 5a seminfinals on Saturday in Pine Bluff.

An extraordinary chapter in Arkansas sports history closed Saturday night in a half-full Pine Bluff Convention Center. The three-year reign of the Lee brothers is over.

Dederick, Kenderick and Freddy Lee had won two straight 4A basketball state titles and led Clarksville High to consecutive undefeated conference records. It didn’t matter that Dederick, 18 years old, is barely 6 feet tall and 17-year-old Kenderick and Freddy hover around 5-foot-6. Or that their adopted brother, Deven Simms, plays inside at 6-foot-3.

These Davids have not only welcomed the challenge of battling hard court Goliaths, but actually sought them out, slingshots in hand, Nike Air Maxes on foot.

These programs are a far cry from the Panthers’ normal Class 4A competition. Or even competition in the 5A, into which Clarksville ascended this season because a recent influx of new students increased the high school’s enrollment (many of the new students were political refugees from Myanmar).

Clarksville coach Tony Davis knew this season’s reclassification whittled his team’s chances at an unblemished record and a three-peat at the state tournament.

Still, he welcomed the challenge. “We felt like if we would’ve stayed at 4A, we wouldn’t have been challenged. Last year, we won every game in the state tourney by 20 or more.”

On Saturday night, Jacksonville provided Clarksville with plenty of challenge in the 5A semifinals. The Red Devils, who a year ago played in 6A, beat the Panthers 52-44 to secure a spot in the finals versus Alma this Friday at 7 p.m. in Barton Coliseum.

In the first half, Clarksville hung with Jacksonville, which had a two-to-six inch height advantage at nearly every position. What the Lee brothers lack in height and wingspan, though, they more than make up for with jaw-dropping quickness and an anticipation of each other’s moves that can only be honed through a lifetime of familiarity.

“It’s crazy, because they’re not like any other team” that only practices with each other, says Jacksonville senior guard Justin McCleary. “They eat together, they live together, they know what each other’s thinking at any given moment.”

This fraternal ESP produces Sportscenter-type moments when a Lee brother bolts past his defender. “If they get to the rack, then that’s when they open up everything,” McCleary says. “They use all their tricks, all their moves on you.”

But McCleary and his cohorts were quick enough to stay in front of the Lees the majority of the game. They forced more three-point attempts than the Lees should have taken. While each brother has the ability to get red-hot from out there, this was not their night. They made a grand total of three three-pointers.

Jacksonville’s crucial push occurred at the end of the third quarter and start of the fourth quarter. In that span, 6-foot-1 guard Aaron Smith used his size and strength advantage to drive into the lane for two lay-ups. Then, McCleary, also 6-foot-1, overpowered Kenderick Lee for a 10-foot jumper which put Jacksonville up 44-34.

On this night, Goliath had his way.

But these four Davids, three biological brothers and their adopted brother Deven Simms, can still find much to be proud of in their run together. “They’ve been the face of the program,” Davis said. “Everything we’ve done, it’s them — how hard they play, how much they love the game, how much they’ve been in the gym.”

Next year, Simms will likely play at Hargrave Military Academy, a Virginia prep school, but there’s an outside chance the Lee brothers could still wreak havoc together at the college level. It didn’t appear that way until June, 2012.

Dederick Lee, a senior, had committed to Arkansas as a sophomore but it appeared he would be the only brother who would be a Razorback. But by last summer Oral Roberts University had offered all three brothers scholarships, which led their father, Frederick Lee, to reconsider what was in Dederick’s best interests. While the family loves the Hogs, the likelihood of more playing time at ORU and a chance to stay with kin had stronger pull. So, Dederick decommitted from Arkansas and soon afterward committed to ORU.

Frederick Lee added it’s likely Freddy, a junior, will also sign with ORU. “That would have never been able to happen” at Arkansas. “It’s more important for them to be together and play like they’ve been playing their whole lives.”

The University of Central Arkansas is looking at Kenderick, also a junior, and at this point is in the driver’s seat for his commitment.

Certainly, one Lee brothers reign has ended but it’s possible another one could soon start. Joining Kenderick and Freddy on Clarksville’s team next season will be a 5-foot-6 transfer from Mulberry High — younger step-brother Darren Lee.

Read more about the Lees — their arrival in Clarksville seven years ago and their plans to compete in this summer’s most prestigious national tournament — at thesportsseer.com.