The great and powerful OZ?

Prequel’s wizard lacks magic of the original by PIER MARCHANT SPECIAL TO THE DEMOCRAT-GAZETTE | March 8, 2013 at 3:12 a.m. 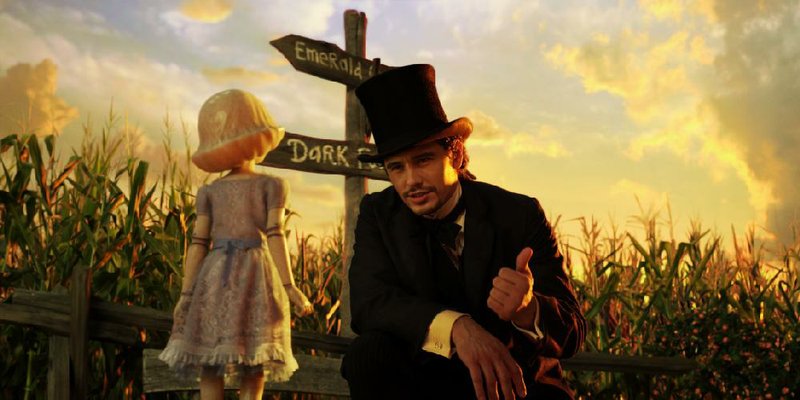 Oscar Zoroaster Diggs (James Franco) is a sideshow conjurer with a traveling circus in 1905 Kansas who is magically transported to a surreal realm in Oz the Great and Powerful.

LITTLE ROCK — So, just how do you make a new movie whose DNA is directly shared with one of the most famous and beloved films of all time? That’s right, you make a prequel! That way you can suggest all the things about the beloved first film you want to (and show the secret origins of some of those very same beloved characters), all without actually having to step on the first film’s turf, and, er, avoiding the possible nasty copyright infringement suits the original studio has their legal department standing at the ready to enact at a moment’s notice.

Disney’s Oz the Great and Powerful film, therefore, is not to be directly associated with MGM’s The Wizard of Oz, even though an enormous amount of material is shared. There’s Kansas and tornadoes, yellow brick roads and broken but sweet children’s toys, good and wicked witches, dreamy poppies, and even a shrunken aspect ratio black and white opening (and a glorious widescreen Oz-color revelation later). Perhaps the biggest difference here (besides a disturbing lack of Toto) is that in place of Judy Garland singing her little heart out, we have James Franco, leering his perfected snake-oil smile and pulling colored scarves out of his coat pockets as a testament to his “magic.” 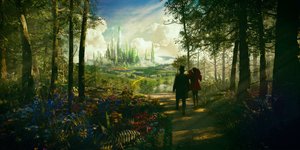 There’s still a yellow brick road and a wizard (in training) but no Toto (or singing) in Disney’s pre-Dorothy Oz the Great and Powerful.

You see, Oz (Franco) isn’t any kind of real wizard. He’s a second-rate carny magician, playing to guileless rubes for the few pennies of disposable income they have stuffed in the pockets of their ripped-up overalls after planting season. Along with his loyal assistant, Frank (Zach Braff), he puts on a daily “show” but spends most of his time trying to trick beautiful, young women into - and shortly thereafter, out of - his broken down trailer. But then the tornado happens, with Oz whisked away in a hot air balloon, and when he settles down to this strange and fantastically wonderful new world, he quickly adapts to his new surroundings.

And, boy, does he. Within minutes of landing, he meets a young, comely witch, Theodora (Mila Kunis), whom he quickly seduces, and enters the Emerald City in order to meet her sister, the late king’s consul, Evanora (Rachel Weisz). They assure him he’s the master wizard from their late father’s prophecy, who will be the one to save them all. In order to do so, he must defeat the wicked witch who lives in the Dark Forest before he can ascend to the throne. This he very nearly accomplishes until he actually meets this witch, Glinda (Michelle Williams), who turns out to be anything but wicked, and realizes Evanora has been running a scam on him from the start. Then things get all kinds of dark cloudy and flying baboon nasty before they’re settled.

With what one imagines must have been enormous pressure to live up to a legend, despite the shared raw materials, the film turns out to be surprisingly adept at carving out its own space in the Oz dynamic. Blessedly, gone is the singing (save for one brief and interrupted song from the Munchkins, who, along with the other residents of Oz, are as colorfully attired and happily multicultural as a Benetton catalog), and many of the original fantasia elements with which everyone is so familiar.

Additionally, it has a good deal of fun with its process. Anyone the least bit cognizant of the previous cinematic stylings of director Sam Raimi can see how much the man is in his element in the film’s engrossing opening act - which involves a run-down circus with boozing clowns, hack musicians, moustache-twirling strong men and bamboozled children. He’s on slightly more shaky ground when Oz enters Oz, but he still manages to insert his two signature elements - the obligatory fish-eye lens camera shot and a welcome dollop of Bruce Campbell.

Despite fears to the contrary, Franco also proves to be a reasonable foil for all the peculiarity around him. Oz so immediately takes to his new surroundings that he never once stops to question the giant, orchidlike flowers, spiraling rock formations or heinous flying baboons (which are amped up in this film like something out of Jurassic Park; what they lack in haunting peculiarity from the original, they try to make up for with outlandish ferocity). This world, it becomes clear to us, makes much more sense to him than the one he was born into. Unlike Dorothy, he has no particular desire to ever go back home. Also good: The powerful triad of female leads acquit themselves well, though Kunis has little of Margaret Hamilton’s frightening, off-kilter delivery and absolutely none of her trademark cackle.

Still, in comparison to the 1939 classic, this version falls predictably short, especially in the one aspect you might have assumed would favor the upstart. The films can be contrasted by their brand of special effects: the far more difficult (and therefore moving) practical effects of The Wizard of Oz vs. the easy cartoon convention of CGI in this Oz. Whereas the first film left theatergoers truly spellbound, from its effects and being one of the best films released in early 3-strip Technicolor, this version will only placate the already long-jaded masses. There’s nothing new here, despite Raimi’s ever-inventive camera work and the film’s very expensive outlay for top-of the-line graphics.

In the end, what we can detect, is no matter how beautiful this film might appear on its surface, it’s really just a bunch of good-looking actors performing in motion-capture suits in front of a green screen, pretending to talk to a baboon in a bellhop outfit or a small ceramic girl. Sure, we might have seen the makeup smears on the Cowardly Lion’s neck, or the suspect nature of the Tin Woodsman’s metal materials, but they were still real, in front of us in such a way that you couldn’t easily discount them. “If you can make them believe,” Glinda tells Oz at a crucial juncture in the new film, “then you’re wizard enough.” But, unfortunately, despite their best efforts and an enormous effects budget, Raimi and his team have given us precious little to believe in.