How to stuff a WILD BIKINI

It’s beach-blanket bedlam in the dark, unruly satire Spring Breakers by PIERS MARCHANT SPECIAL TO THE DEMOCRAT-GAZETTE | March 22, 2013 at 2:57 a.m. 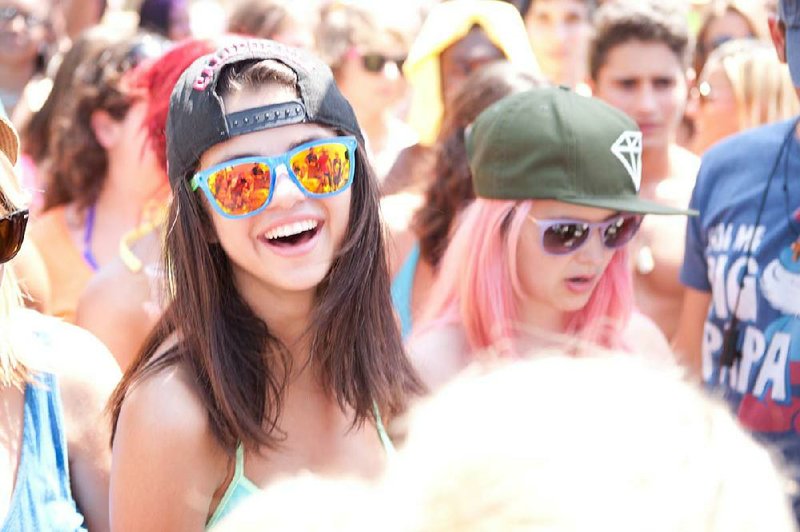 Whatever vision gets conjured up at the prospect of junkyard auteur Harmony Korine and thousands of drunk, dancing frat boys and bikini-clad co-eds let loose on the beaches of southern Florida, you certainly would not be shocked at the film’s opening montage of sun-drenched decadence, with waves of wasted, privileged kids doing beer bongs and booze spinners, defiantly grabbing their crotches for the camera and grinding into one another in desultory, condemning slo-mo.

But it also becomes clear very quickly that Korine - long a kind of gross-out anarchic surrealist, Bunuel by way of John Waters - has a different agenda in mind. There’s plenty of sex, drugs, and violence, mind you, and gestures of the arch satire he’s well known for, but this time, there’s also a certain kind of - dare I say it? -emotional coherence amongst the fleshy carnage.

The setup is straight out of a bad ’80s sex romp: Three beautiful college friends - Candy (Vanessa Hudgens), Brit (Ashley Benson) and Cotty (Rachel Korine) -stuck for cash at spring break time, rob a nearby fast food restaurant and convince a fourth friend, the more sedate and religious Faith (Selena Gomez), to join them down in Florida for a few days of rampant hedonism with their ill-gotten profits.

They crash at his crib a bit, a simple ranch-style house near the water loaded with packets of cash, baggies full of drugs and enough automatic weaponry to make his own armory. Under his careful tutelage, the girls move on from opportunist criminal dabbling to a full-on crime wave, helping spread the word of Alien’s new found posse with violence and intimidation. All of this proves too much for the overwhelmed Faith, who takes the first bus she can out of the south Florida morass her friends have fallen into, but the remaining three take Alien’s word - and lifestyle - up a few notches.

Historically, Korine has worked best coupled with youth provocateur director Larry Clark. The two of them first combined for the eerily indispensable Kids back in 1995 (Korine, then 19, wrote the screenplay) and then again for the compelling Ken Park in 2002. As a writer, Korine always had chutzpah and imagination in spades, but left entirely to his own devices,his directorial work, ranging from the rag-tag freestyle freakout Gummo to the nondescript non sequitur Mister Lonely, has often, ironically enough, lacked direction.

Here, though, in a feature successfully first screened at last year’s Toronto International Film Festival, one senses he has finally hit on a winning formula: just enough black comedy and sex-soaked satire to put a thin gloss over a more reasoned and imperative concept. On the surface, it’s all pastel bikinis, booze- fueled antics and comically felonious chest-thumping, but beneath that, it’s clear Korine has much to say about the human condition, gun culture, and the deep desire of our nation’s youth to try on new identities and configurations at the risk of completely and forever losing themselves to their new, pathological lifestyles.

It’s telling that the girls’ mantra as they gear up to do their first robbery is to “act like you’re in a movie” when, in fact, that’s exactly what they’re doing in the first place. The reckless youth of today have become so self-infatuated and taken with their own meta-narrative identities, they’ve become their own spectators, a class of dedicated unique monthly users that eternally download everything they put out in the media consumption maelstrom. In a way, Korine has fashioned a rambunctiously mature film in the guise of a party-down spectacular. To this end, his cast, which includes his own wife, performs with admirable abandon.

Indeed, more shocking than any of the excess of nudity, binge drinking and weaponry, the single element that most helps sell Korine’s vision is Franco’s leering, post-adolescent white trash thug. Released at last from pretty boy roles (which, with his self-consciousness, he simply can’t pull off) and dispensing with having to pretend he’s a more gifted actor than he actually is, Franco absolutely cuts loose in the role, and the results are hilarious and mesmerizing.

One scene in particular, in which Alien is proudly giving the women a tour of his bedroom, displaying his accumulated pile of weapons, money and drugs, is a tour-de-force of wanna-be thug-posturing. Like the distinctly suburban middle-class kids who pose on their Facebook profiles trying to look as menacing and hard-core as possible, dripping in gold and throwing out unaffiliated gang signs, Alien is at once a product of his perceived environment and a relentless hustler who has spent far more time studying gangsta hip-hop videos for lifestyle tips than actually committing the crimes that support his claims. Sporting the worst cinematic teeth since Willem Dafoe’s mangled gumlines in Wild at Heart, Alien tools around in his white Camaro (license plate: BALLR), his girls at his side and looks as if he could never be any happier.

Which, if you think about it, is a pretty good image for Korine himself. Like the strange incantation-like phrase that permeates the film (“spring break, spring break forever!”), he plays homage to frat boy hedonism, ’80s sex comedies and the reality-TV-obsessed culture around him, while also evoking something a good deal more dark and disturbing. It doesn’t exactly spoil your wild bikini bender, but it certainly gives you something to ruminate on while nursing your wicked hangover the next morning.

Print Headline: How to stuff a WILD BIKINI