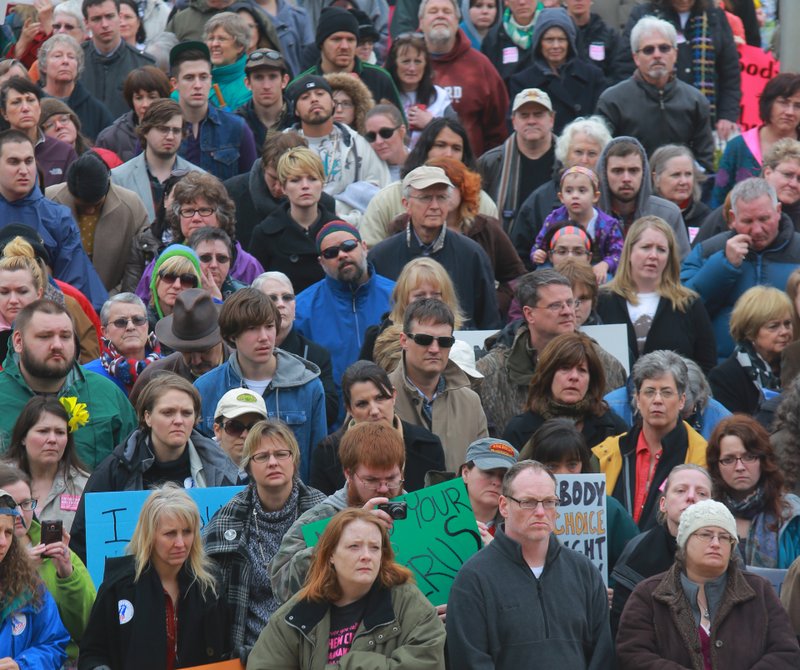 Hundreds stood in front of the state Capitol steps Saturday afternoon to protest for women's rights and against recent bills passed through the Arkansas Legislature.

Organizers of the "Protest at the Arkansas Capitol" began an event on Facebook to rally residents to attend. Before the event, more than 1,000 people indicated they would attend.

The protest was aimed at abortion bills that have passed through the Arkansas Legislature and bills under consideration that would cut funding to Planned Parenthood.

Organizers invited speakers to come, and also had open microphone sessions in between keynote speakers.

"I'm happy to stand here today to represent the 4,000 members of the ACLU of Arkansas, and join our voices with yours," Sklar told the crowd. "And say to the lawmakers of Arkansas, 'enough is enough.'"

The ACLU has pledged to fight the abortion legislation, in particular Sen. Jason Rapert's, R-Bigelow, 12-week abortion ban bill, which was one of the most restrictive pieces of abortion legislation to be passed in the nation. Sklar reiterated the ACLU's plans to the large crowd of supporters.

"We are going to sue the state and block the most extreme abortion ban in the country, and we will win," Sklar said.

Niki De Soto, a Salem resident, said it was important for Arkansas lawmakers to realize women are able to make their own decisions.

"We're adults," Soto said. "We know what we're doing, we can choose for ourselves. There's no reason why legislators should legislate what I can do with my body or what anybody else can do with their body."

Organizers passed out information about the bills and had voter registration forms for those in the crowd.