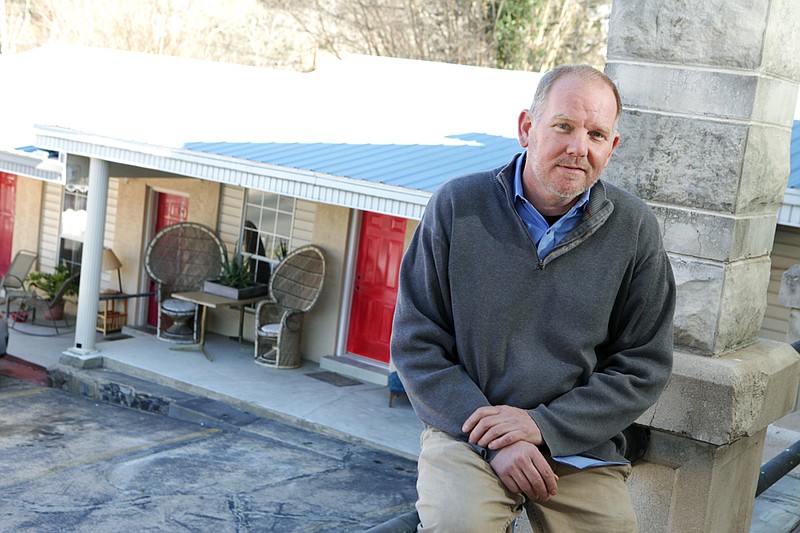 Joseph Sheridan is co-owner of the B Inn in Hot Springs. Sheridan hopes the hotel and cafe will provide a community center for his neighbors.

Joseph Sheridan, originally from California, has owned the B Inn in Hot Springs with his business partner, Armando Ortiz, since September 2009.

Sheridan moved to Hot Springs in 2000 after spending a portion of his life in New York as a night-club promoter.

His mother lived in Hot Springs while he was living in New York, and he fell in love with the city.

After working in restaurants around Hot Springs, Sheridan and Ortiz purchased the inn, along with the home, which was built in 1891, that sits in the middle of the property.

Sheridan said the structure that is now the inn was originally built to house troops coming back from World War II because Hot Springs was used as a center for rehabilitation.

“The B,” as Sheridan calls it, is in the Park Avenue neighborhood, near downtown Hot Springs, which is an area that used to have a bad reputation.

“The B Inn was a bridge to revitalize Park Avenue,” Sheridan said.

Sheridan said the focus of the inn is to show people that the area is now thriving and is safe.

“We wanted the neighborhood to change,” Ortiz said.

The “B” in the name stands for different things, Sheridan said. It stands for bed, breakfast, books, baths and bodywork.

Each room at the inn is themed after a different book genre. This idea spawned after Sheridan and his mother had an online bookstore, and the market slowed down.

“We decided to stop selling books and hold onto ones we liked and name each room after a different book theme,” Sheridan said.

Each room has stacks of books that match the theme of the room.

Sheridan said the inn was a risky project to take on, but he and Ortiz are always looking for a way to make the inn better.

Sheridan and Ortiz said they hope to turn the home on the property into a “natural light” art gallery and a center for guests to relax and rejuvenate.

Sheridan’s aim for the home is to make it a “green” house so visitors can see how they could live in a home that uses less energy and more natural resources.

Sheridan said he and Ortiz operate the inn in a unique way because diversity is something that Sheridan said is lacking in the world today.

“Society has gotten to where everything is the same,” Sheridan said.

Sheridan said that when he meets the people who stay at the inn, he tries to be as “real” as possible because that is what he likes when he travels.

“I really want to get to know people in Hot Springs,” Sheridan said.

One way Sheridan and Ortiz are meeting some of the people of Hot Springs is through their newest project, the Park Island Market and Cafe, which opened next to the inn at the beginning of March. Park Island offers locally grown produce, grocery items and a cafe.

Ortiz finds joy in operating Park Island and the inn with Sheridan.

“I love to be around people and nature, and meet people from different parts of the world,” Ortiz said.