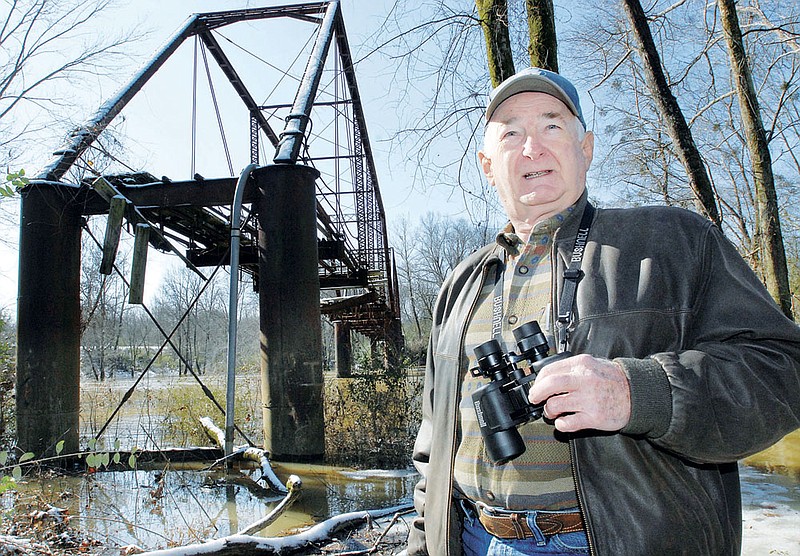 Lynn Moore is shown in March 2011 along the edge of the Saline River in Benton with the historic Iron Bridge behind him. Moore is a member of a nonprofit organization that hopes to turn the area into a park.

“We’re off and running,” said Lynn Moore on Wednesday, announcing that the nonprofit organization he helped found to save the 124-year-old Iron Bridge over the Saline River now owns access to the bridge, a big step toward making the group’s plan for a park at the site become a reality.

Saline Crossing Regional Park and Recreation Area Inc., founded in 2010, received the deed to 5 acres that connect the end of River Street in Benton to where the bridge crosses the Saline River in a wooded area south of the city. The land was donated by Bill and Shannon White of White Furniture in Benton in February.

“We donated it so it can stay a historic landmark and can be developed into a park,” Bill White said in an interview when the

donation was made official. “It’s a real scenic area. Several movies have been filmed around it.”

The deed was officially transferred to the nonprofit organization about a month ago, Moore said.

The Whites have said they intend to donate 5 acres each year to the organization, up to a total of 35 acres, according to Wednesday’s announcement.

“Until then, this was only a dream,” Moore told the Tri-Lakes Edition after the members of the group met Tuesday night. “Now, we are major stakeholders in a great historic and recreational development.”

Once the Saline Crossing organization had the deed, Moore said, that set off a series of events that is bringing the plan closer to fruition.

“After I got the deed, I showed it to [Saline County] Judge Lanny Fite, and he said he had just been talking with [the Arkansas] Game and Fish [Commission] about putting in a boat launch somewhere,” Moore said. “I told the judge the bridge site would be a good place, and it was something that was part of our plan for the area.”

The commission proposed a $65,000 project to reopen and pave the barricaded portion of River Street down to the bridge and construct a concrete bank walkway for bank fishing along the northern bank of the river, near the bridge. There would also be a parking lot and deck area, according to a preliminary proposal by the commission.

“If the project is approved by the commission, it goes into the queue for next year,” Moore said.

Moore, a former Benton mayor, said access to the river at the bridge site is not safe.

“Judge Fite said the county would offer to provide the construction labor for the project,” Moore said.

The county’s in-kind help would be valued at $16,250, according to the group’s announcement. The county would also pick up the continued maintenance of the site because the area would be for free public use. The announcement also said Fite indicated the county is still committed to providing labor and funds to help restore the bridge.

“It’s a part of our history that is just out in the briars and forgotten about by almost everybody,” Moore said in 2010 when the Saline Crossing group was formed.

But the site carries a lot more history than just the Iron Bridge, which crosses the Saline River at a spot where the river is easily forged, along a winding trail formed by Native Americans centuries ago. Archeologists speculate that Hernando De Soto and his Spanish soldiers may have crossed the river there in 1541, according to a history of the bridge written in the 1960s.

Once in American hands, the trail became part of the Military or Stagecoach Road, according to historical research kept by Moore.

“This is where Benton began, this spot on the river. It is the birthplace for the whole area,” Moore said. “William Lockert moved his family there in 1815, and he may have operated a ferry.”

According to a report on the history of Benton produced by the city, Lockert was given rights to build the first bridge over the river in 1831 by the Territorial Legislature. There was a toll for crossing the bridge, but people could still ford the river for free.

The bridge that remains was meant for wagon traffic but carried automobile traffic until the bridge was closed.

“We have been working on this for a long time,” Moore said. “Then, bang, something happens, and it gets moving.”

However, he said, turning the dream into an active recreational area will take time.

“Everyone had caught our excitement and wanted to get a group together to clear out the brush this afternoon,” Moore said on Thursday. “It just doesn’t work like that. This will take time.”

The Saline Crossing group plans to bring people into the area in May to learn more about the site and the organization’s plans.