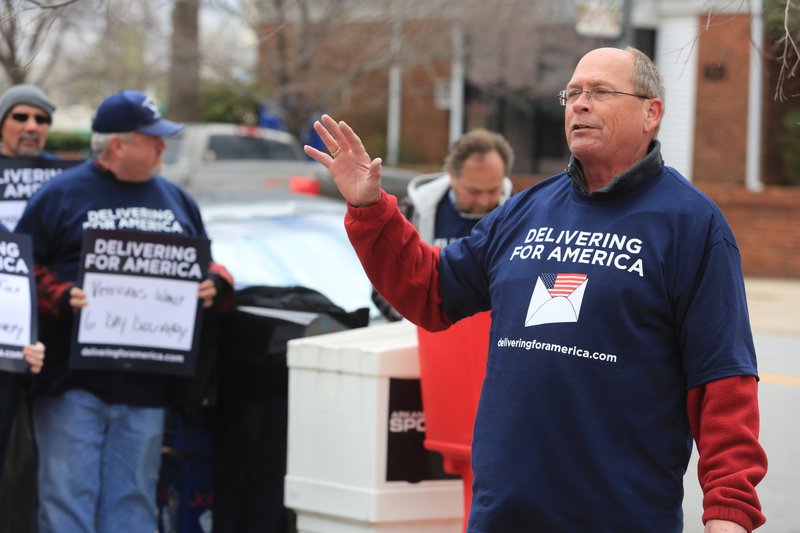 Through the blustery wind and cold temperatures Sunday afternoon, chants of "U.S.A. for six day!" could be heard at the Little Rock Post Office on Capitol Avenue as a group gathered to rally behind the U.S. Postal Service's current six-day mail delivery.

The group, made of current and former mail carriers along with Arkansas residents, was part of the movement by the National Association of Letter Carriers which protested at post offices in every state on Sunday, in support of keeping mail delivery on Saturdays.

The Postal Service announced plans last month to cut Saturday letter mail delivery in an effort to reduce costs after losing close to $16 billion and reaching its legal borrowing limit in 2012.

The proposed cut, which would only allow for package delivery on Saturdays, would save the Postal Service about $2 billion per year.

The Postal Service said a 14 percent growth in package deliveries since 2010, due to online sales, factored into keeping package delivery on Saturdays.

Anderson was encouraged by the rally turnout on a less than ideal afternoon.

"As you can tell, people are concerned about the Postal Service and its future," Anderson said.

Anderson said the Association of Letter Carriers wants to get across the importance of six-day mail delivery to the public.

"The American public would be the one that was hurt the most (by cutting Saturday delivery)," Anderson said. "They would lose their universal service that the Postal Service currently provides."

Anderson told the group of supporters that small businesses and senior citizens would be among the groups that were affected the most by the loss of Saturday mail-delivery. Cutting Saturday deliveries would force small businesses to delay transactions, financial records and other areas they rely on the Postal Service for, Anderson said.

The Postal Service plans to switch to its new delivery schedule in August.

The Government Accountability Office said Thursday that the Postal Service is required by law to deliver six days a week.