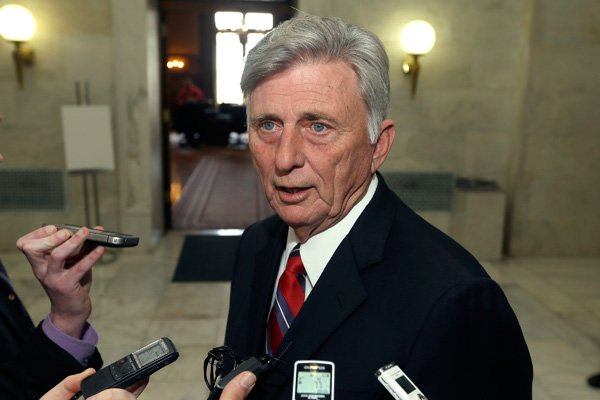 Beebe vetoed Senate Bill 2 on Monday, a bill that would've required voters to show identification at polling stations. In this March 10, 2013 file photo, Gov. Mike Beebe is interviewed in a hallway at the state Capitol in Little Rock, after vetoing legislation that would have banned abortions 12 weeks into a pregnancy.

Governor Mike Beebe vetoed Senate Bill 2 on Monday afternoon, according to a release from his office.

The bill, which proposed a requirement that Arkansans show identification when voting in any election.

In the release, Beebe said the bill is "an expensive solution in search of a problem", with the Bureau of Legislative Research estimating the cost of implementing the bill at $300,000 in tax money.

The statement also added that the Attorney General's Office could not determine the legal future of the bill, should it become law.

"At a time when some argue for the reduction of unnecessary bureaucracy and for reduced government spending," Beebe said. "I find it ironic to be presented with a bill that increases government bureaucracy and increases government expenditures, all to address a need that has not been demonstrated.  I cannot approve such an unnecessary measure that would negatively impact one of our most precious rights as citizens."

Shortly after Beebe's office released news of the veto, Doyle Webb, chairman of the Republican Party of Arkansas, released a statement in response to the veto.

“By vetoing voter ID legislation, Governor Beebe has once again overruled the wishes of Arkansas voters, disregarded the will of bipartisan majorities who passed the bill in the legislature, and even ignored the opinion his own Attorney General released just this afternoon." Webb said. "In order to ensure the fairness and integrity of Arkansas elections, we look forward to overriding this veto in the days to come.”