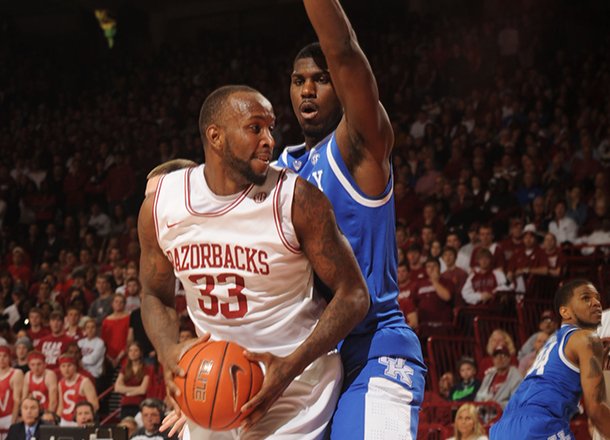 Arkansas junior forward Marshawn Powell (33) attempts to make a move around Kentucky freshman forward Alex Poythress during the first half of play Saturday, March 2, 2013, in Bud Walton Arena in Fayetteville.

FAYETTEVILLE — Arkansas forward Marshawn Powell said Tuesday in a message on Twitter he will enter the 2013 NBA Draft.

The redshirt junior averaged 14.5 points and a team-high 5.4 rebounds per game this season for the Razorbacks. Powell also added a 3-point shooting element to his game, shooting 34.6 percent beyond the arc.

“I wish Marshawn all the best as he moves on to the next stage of his basketball career,” Arkansas coach Mike Anderson said in a statement. “He had a tremendous junior season after recovering from a knee injury and was a big part of the success that we had this season. He is a skilled forward who can stretch the defense because of his ability to shoot. He can also create by putting it on the floor and has a nice post up game. I feel that his best basketball is in front of him.”

Powell still has the opportunity to return to school as long as he does not hire an agent and withdraws his name before the April 16 deadline.

Powell, 23, is in his fourth year at Arkansas. He was named to the league's all-freshman team in 2010 and led the Razorbacks in scoring as a sophomore. He averaged 18.5 points in his first two games under Anderson, but tore his ACL just two games into the 2011-12 season. He also battled foot injuries early in his career.

The Newport News, Va. native was named to the second-team all-SEC earlier this month, along with sophomore guard BJ Young, who is also believed to be considering going pro. The NBA Draft is set for June 27 at Madison Square Garden in New York.

If Powell remains in the draft, it will open up an available scholarship for Arkansas to use during the spring signing period next month.