Pelosi says she 'prays' Hillary Clinton will run for president 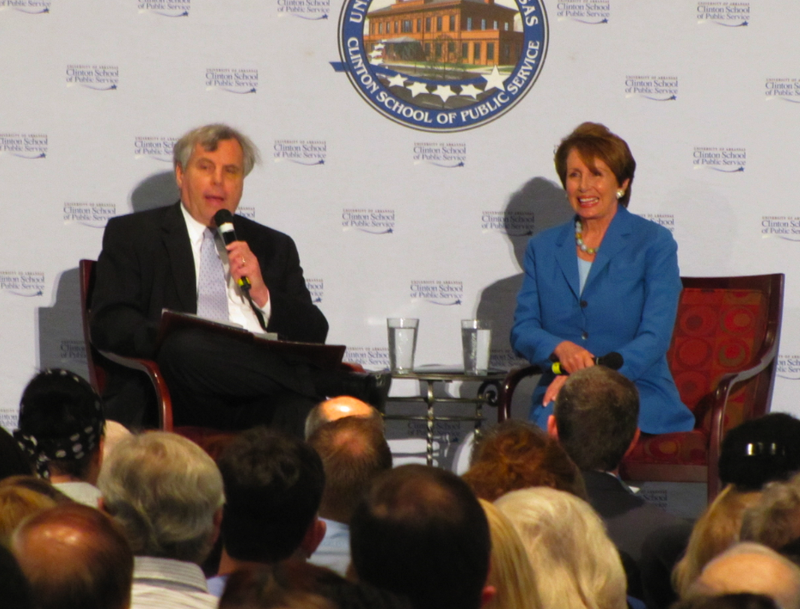 Pelosi, D-Calif., speaking in Little Rock about current affairs in American politics, said she had no inside information about whether Clinton will run. But, she said, she considers Clinton the most qualified potential nominee.

"I pray that Hillary Clinton decides to run for president of the United States," Pelosi said, drawing loud applause from the crowd of several hundred at the Robinson Center. "... Nobody has been first lady and senator and now secretary of state. Putting everything aside that she is a woman, she'd be the best qualified person that we've seen [in recent years]."

Pelosi said Clinton getting elected would be "such a lift for our country" and the world.

"Think of the message it sends to women in the world," she said. "The most powerful figure in the world is a woman, and she also happens to be the most qualified for the job."

Pelosi reiterated several times that she has "no knowledge of anything except my prayers" with regard to a potential Clinton run.

"Maybe you'll find out tomorrow at the airport," Pelosi said, referring to a dedication ceremony Bill and Hillary Clinton will attend for the airport in Little Rock named after them. "But I don't think so."

Other questions during the Clinton School of Public Service appearance ranged from Pelosi's view on what needs to happen in Syria to how more women can be encouraged to seek elective office to where she stands on the Keystone pipeline.

On the latter, Dean Skip Rutherford asked her her view in the context of the March 29 oil spill in Mayflower. Pelosi said she wants to wait and see what further environmental studies say about the pipeline, but she has serious questions.

"What is the environmental impact?" she said. "Why are you saying its going to decrease our dependence on foreign oil when none of it is for domestic consumption? And what really is the job situation?"

Pelosi called reports that the pipeline will create tens of thousands of jobs an "exaggeration."

On Syria, Pelosi said it was a "complicated situation" in which sending in American troops or providing air cover aren't really viable options.

But she called the Bashar Assad presidency "brutal in its treatment of its own" and suggested arming its opposition may be the path.

"Now I think we're moving to a place where I think we'll be providing more lethal aid to strengthen the hands of those who would like to see President Assad gone," she said.

For 25 years, Pelosi has represented California’s 12th District, which includes most of San Francisco, in the U.S. House of Representatives. In November 2002, House Democrats elected her as the first woman to lead a major political party in Congress. From 2007-11, Pelosi was speaker of the House.