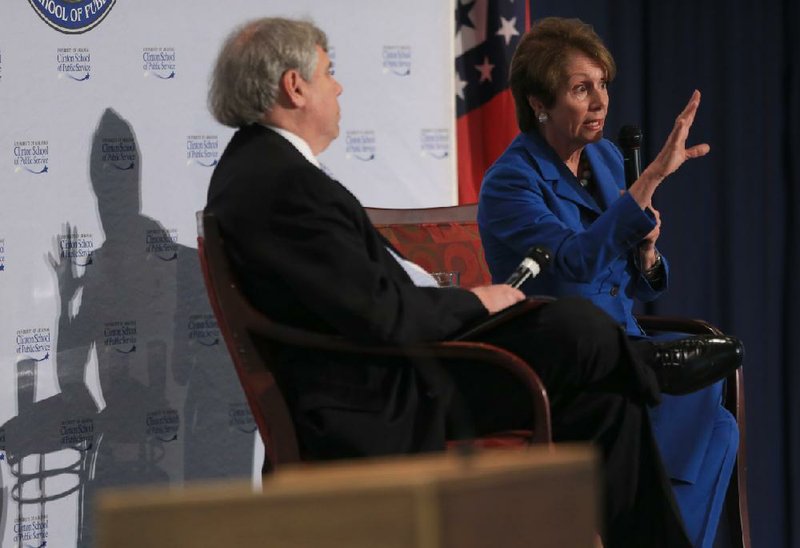 U.S. House Democratic leader Nancy Pelosi of California speaks Thursday during an appearance for the University of Arkansas Clinton School of Public Service held at the Robinson Center in Little Rock. Skip Rutherford, the school’s dean, was the master of ceremonies.

U.S. House Minority Leader Nancy Pelosi called the passage of the Patient Protection and Affordable Care Act “the most monumental achievement” in the public-service careers of its supporters when she spoke in Little Rock on Thursday.

“This was the opportunity of a generation that we were not going to pass up,” the California Democrat told a crowd of 700 at an event organized by the University of Arkansas Clinton School of Public Service.

Pelosi, who was speaker of the U.S. House of Representatives during the bill’s development, said it passed despite the “scorched earth, shock and awe, take-no-prisoners, carpet-bombing” attacks of critics, who attempted to sabotage the legislation’s success by “misrepresenting what it was.” They did so by spending “hundreds of millions of dollars” to influence debate and spread rumors that the bill was really about issues such as “death panels” and abortion, she said.

She spoke in a state where a Republican-led Legislature has been critical of the federal policy and as states around the country continue to decide whether to sign on to a provision of the health-care law made optional by a U.S. Supreme Court ruling - the expansion of Medicaid coverage to all residents with incomes below 138 percent of the federal poverty level starting in 2014. Arkansas lawmakers recently opted to pass a bill known as “the private option” that will allow qualifying Arkansans to obtain private health insurance paid for with federal Medicaid dollars.

Pelosi said passage of the Affordable Care Act was important to aid American businesses and to end “a path of increasing [health-care] costs that was unsustainable.”

Now that the law has passed and is gradually taking effect, “people have to know what this means to them, and that’s what we’re working on now,” she said.

Pelosi said she expects to see passage of a comprehensive immigration bill “before the year is out.” She pointed to the support of former President George W. Bush for changes to U.S. immigration laws and the success Democratic candidates had among Hispanic voters in the 2012 election as indicators that there would be bipartisan support for a bill.

On Syria, Pelosi said she expects the United States to begin sending “more lethal aid” to the rebels, especially if leaders can verify that President Bashar Assad has used chemical weapons against his opponents.

Rutherford asked Pelosi whether she would support the approval of the Keystone XL pipeline, which would carry oil from Canada to refineries in Texas, in light of the recent rupture of an Exxon Mobil pipeline in Mayflower, which spilled oil into a subdivision.

Pelosi said she hasn’t taken a public position on the Keystone pipeline, but she thinks some of its supporters have exaggerated its ability to create jobs. More jobs would be created by an investment in alternative energy sources, like wind turbines and solar, she said.

Pelosi, the first female speaker of the house House and a supporter of former President Bill Clinton - she was in Little Rock the night he was elected - said she prays that Hillary Clinton runs for president.

“She would be the most qualified person to enter the White House in modern history,” Pelosi said, pointing to Hillary Clinton’s experience as first lady, U.S. senator from New York and secretary of state.