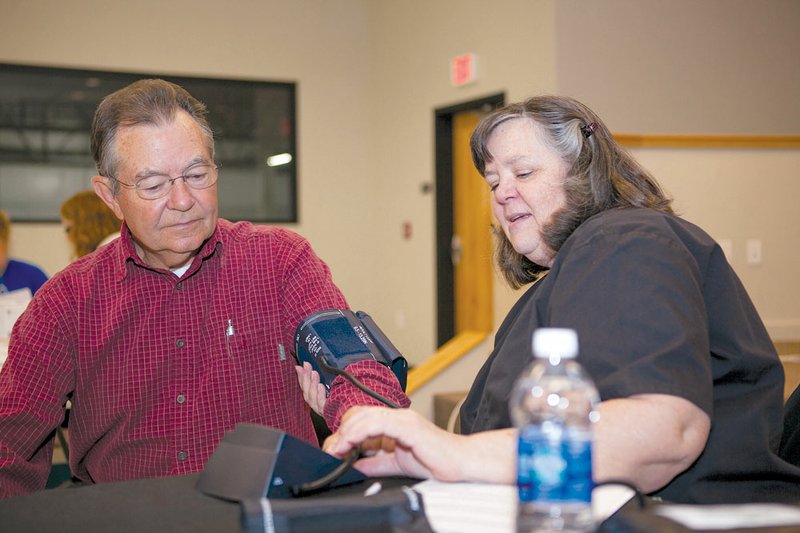 Greenbrier Mayor Melton Cotton gets his blood pressure checked by Bonnie Ellis of Conway Regional Medical Center. Greenbrier started a Greenbrier Gets Fit program for city employees and joined the Community Healthy Employee Lifestyle Program through the Arkansas Department of Health. Greenbrier is the first city in Arkansas invited to be a pilot program in the state’s worksite-wellness program. Benefits include earning three days off with pay.

Thanks to a mayor on a mission to get healthy, Greenbrier Gets Fit was launched for city employees.

The Arkansas Department of Health also has invited Greenbrier to be the first city in the state to join its Web-based healthy-lifestyle program.

“He’s been walking and getting healthy — he’s lost like 25 pounds — and he thought it would be good to get some competition,” O’Quinn said.

“We kicked off a whole wellness program,” she said.

It started May 1, and city employees underwent health screenings.

Cotton, 70, said he decided he needed to lose weight and started walking.

“I look around, and I see some city employees that need to do the same thing, so that’s the way it got started, I guess,” he said.

It’s a voluntary program, he said.

He also asked city employees to join the Mayor’s 100-mile Challenge. He will walk 100 miles over a period of time, possibly a year, he said.

“That’s a piece of cake, anyway. Some of them accepted, and some didn’t,” he said.

“This already has created a lot of friendly competition among my staff: ‘I want to beat so and so,’” she said.

O’Quinn talked to Katrina Betancourt of Greenbrier, worksite-wellness section chief for the Arkansas Department of Health.

The Community Healthy Employee Lifestyle Program was created in 2012 by the state Department of Health.

At about the same time it launched Greenbrier Gets Fit, the city joined the Community Healthy Employee Lifestyle Program.

The Health Department also invited Greenbrier to be a pilot city with the program.

AHELP, as it is called, is a worksite-wellness program for state agencies, boards and commissions.

Employees can earn up to three days off within a calendar year by meeting certain criteria, including eating well, exercising and avoiding tobacco products.

There is no cost to employers for the state or city programs, Betancourt said.

Betancourt said all Greenbrier city employees are eligible to participate, including the fire and police departments, “and we’re in talks with the school district and churches as well,” she said. “We wanted to see at a community level, would this work?”

The state program has been successful, Betancourt said.

“We’re an evidence-based model,” she said, adding that evaluations have been funded by the Centers for Disease Control and Prevention.

“We’re one of the leading states that has a worksite-wellness intervention; other states actually model it after Arkansas,” Betancourt said.

It’s not like Arkansas has a reputation as a healthy state.

“We’re ranked No. 8 in obesity; the states around us are the other seven,” Betancourt said. “I think that’s why we’re one of the leading states in this because we have such a big problem with this.”

The ultimate goal is for employees to “increase their overall health,” she said, by increasing healthy behaviors such as eating fruits and vegetables, exercising regularly and decreasing or quitting the use of tobacco products.

Even with three days off, Betancourt said, healthy employees will miss fewer days.

two weeks in the year; that’s actually going to decrease

More information about the AHELP program is available by contacting Betancourt at katrina.betancourt@arkansas.gov, or by calling (501) 661-2227.