A homeless man arrested early Thursday on accusations he threw numerous large trash cans into a Little Rock street did so because he was upset with police, according to an arrest report.

Ronald Adams, 28, was jailed about 1 a.m. after officers responded to the 700 block of Broadway Street in downtown Little Rock in reference to a man chucking garbage cans into traffic.

"I made contact with Adams in front of the Taco Bell," the arresting officer wrote in the report. "He advised he was mad at police and this was his way of expressing it."

The report didn't specify why Adams was angry with police.

In all, Adams threw nine trash cans weighing between 50 and 100 pounds into the street as well as a large rock, police said. 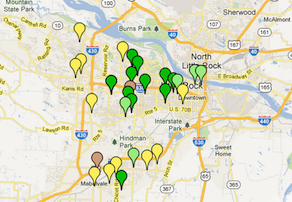