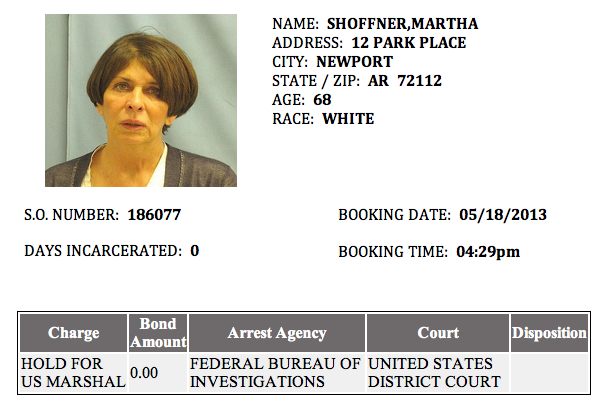 This screenshot from the Pulaski County jail website shows Treasurer Martha Shoffner was booked in about 4:30 p.m. Saturday.

The jail website shows Shoffner, 68, was booked in shortly before 4:30 p.m. The website lists the FBI as the arresting agency and the court as U.S. District Court.

It says she is being held on a hold for U.S. Marshals.

Shoffner, a Democrat, is in her second term as treasurer.

Lawmakers last year asked authorities to look into an audit that found Shoffner's decision to sell bonds before they matured cost the state thousands of dollars.

Shoffner told a legislative panel in September she couldn't recall why her office sold bonds before their maturity dates and purchased similar bonds from the same brokers. Auditors said the activity resulted in a total economic loss of more than $800,000 to the state.

It wasn't clear if her arrest was tied to that investigation.

A message left with a spokesman for the U.S. Attorney for the Eastern District of Arkansas wasn't immediately returned Saturday night.

See Sunday's Arkansas Democrat-Gazette for more on this developing story.