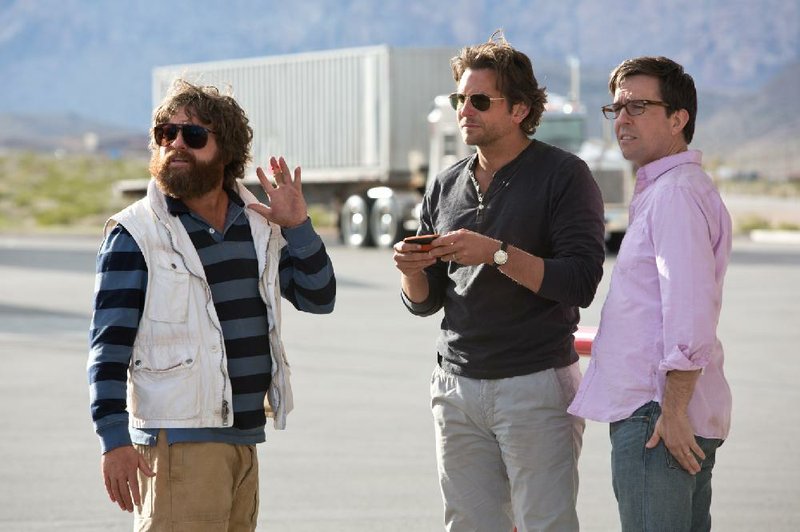 The pack is back: Alan (Zach Galifianakis), Phil (Bradley Cooper) and Stu (Ed Helms) return to Vegas in The Hangover Part III.

You wouldn’t think the producers of a hit comedy franchise that has already grossed more than $1 billion worldwide would take their third and final film and use it as an opportunity to refute those critical of the second one, but don’t go underestimating the wounded pride of Hollywood bigwigs. If our first encounter with the Wolf Pack back in 2009 was an unexpected breath of fresh comic air, combining a succession of ever more inventively chaotic elements wrapped around a killer plot hook; and the second, a critically lambasted lazy fiasco that used an uninspired re-creation of nearly every winning joke from the original; the final installment seems to go well out of its way to prove just how bad things can get when you stray from a winning formula.

As with the first two, our comic apex here is Alan (Zach Galifianakis), the hirsute man-child capable of extreme kindness and barbaric irresponsibility. After a particularly gruesome incident on the thruway involving a giraffe, Doug (Justin Bartha), Alan’s brother-in-law, and the other two Wolf Pack members, Stu (EdHelms) and Phil (Bradley Cooper) are brought in on an intervention on Alan’s behalf. Along with the rest of his family, they convince Alan to enter a treatment center in Arizona, to which the boys helpfully offer to drive him. En route they get waylaid by an imposing gangster named Marshall (John Goodman), whose goons kidnap Doug (one successful holdover from the previous films: keep as little of Bartha on screen as possible) so as to force the others to track down their old nemesis Chow (Ken Jeong), just broken out of Bangkok prison and on the lam somewhere in Mexico, in order for Marshall to regain a large number of gold bricks they insist he stole some years back.

With that, we’re on the caper, with the boys first travelling to Tijuana and helping Chow recover what they believe to be the missing gold before ending back where they started, in Las Vegas, for the showdown.

One thing the producers seemed determined to establish is that the new film takes precious little from previous installments. Beyond the characters - who remain static and surprisingly inert - the only connective tissue is the host of guest stars who return for cameo roles (including Heather Graham and Mike Epps). The rest of the time, the film strains for laughs it used to create with ease, and tries to turn animal cruelty into a running gag. At a loss for much else to do, the film at times resembles some kind of misguided action caper, not even trying for the big guffaw, instead settling for a series of wan smiles.

This is Alan’s film from start to finish, and like a particularly odd appetizer that would leave you depressingly hungry as an entree, his character is simply not built to sustain that kind of weight. As two elements in a larger panoply, Alan and Chow can work wonders, but left on screen for too long, the characters’ comic whimsies get less and less amusing and empty. If the funniest thing in the film’s first 90 minutes is just the recurring sound of Chow’s sneering chuckle, you know things have turned pretty sour.

Music is relied upon far too often to punch up washed-out jokes (as the Pack first gets to Tijuana, The Coasters’ “Down in Mexico” is blasted at us), as is its reliance on Jeong and Galifianakis to bring the funny all by themselves. We might not expect a lot out of straight men Cooper and Helms, but the two are given practically nothing to do except react to everything around them in shock. The lingering image of the film is one character after another looking agape at something and screaming out “What the ?” over and over again.

That is, until the very end - in a post-script stuffed in after the initial credit break - where the film finally cuts loose, referencing the opening of the first film in such a way as if to prove we were wrong to want them to try and pull away from it in the first place. They might have a point: In roughly two minutes, this coda earns more genuine laughs than anything in the 100 that came before it. Otherwise, gone is the original’s inventiveness and anarchic spirit, and gone too is any light from the characters’ eyes. Consider the Wolf Pack Cash Grab trilogy numbingly complete.