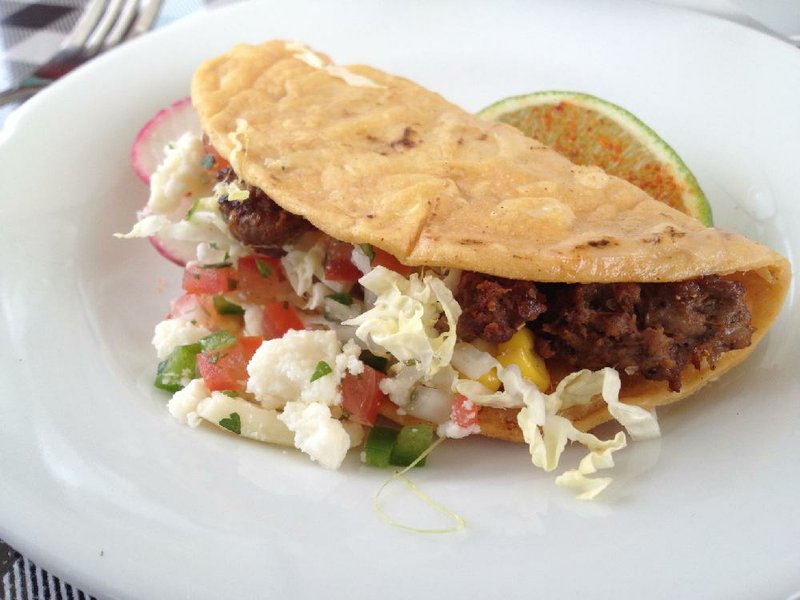 A recent tornado knocked a farm and processing plant in Marshall out of commission, so instead of bison, The Fold’s hard-shell Gringo Taco now features elk.

Word came out more than two years ago that Bart Barlogie Jr. and Wilson Brandt were planning to open a gourmet taco place called B&B Taco Garage in a former Alltel garage and gas station at the corner of Mart Drive and Old Cantrell Road in Little Rock’s restaurant-rich Riverdale neighborhood.

The best-laid schemes of mice, men and restaurateurs gang aft agley (as Robert Burns might have put it if he’d been in our business) and the course of true restaurants never does run smooth (ditto Shakespeare).

Numerous problems, including a legal wrangle over parking with a neighboring restaurateur that was just recently settled in court, contributed to numerous delays. In the interim, the owners changed the name to The Fold Botanas & Bar. Meanwhile, Scott McGehee et al.’s Local Lime swooped in, albeit in far west Little Rock, and eclipsed the concept.

The good news is that The Fold more than holds its own when it comes to its cuisine - a half-dozen varieties of high end tacos, three kinds of ceviche and eight small-plate wonders that go by the name of botanas, the Mexican version of tapas.

The menu is more modest than that of Local Lime - the kitchen doesn’t put out full-fledged entrees, for example - but for those of us for whom that establishment seems like it’s at the far western end of the civilized earth, it’s an excellent alternative.

But it’s certainly not cheap. A $5 botana, a $3 taco, a $12 ceviche plate and a $2.50 “exotic” bottled soft drink was just the right combination for a satisfying and filling meal. But with the tip it came to $25.That puts The Fold right on, or over, the upper end of the dividing line between “moderate” and “expensive.”

The proprietors have created a quirky decor blend in pink, white and pastel green, starting with surviving elements of what the place was (the garage doors, for example, which can slide open for fair-weather feeding), plus some strange reminders, such as a motorcycle suspended from the ceiling and a decorative array of gears.

Add to those hip, modern whimsical accents - for example, a wide variety of chairs, including architect-desk chairs mixed up with fuzzy, fleecy-upholstered Windsors at butcher-block-topped tables, each with a rack that contains salt and pepper shakers, a bottle of commercial hot sauce and an antique steel beer can sprouting a cactus or succulent.

If the staff, from Barlogie on down, were any friendlier we’d have asked them to move in with us. And we were treated even better, if possible, as return customers.

There’s room for about 50 inside and another 40 on the pleasant patio. Surprisingly for a new place, especially an eagerly awaited hip new place like this one, there was no wait for a table even at peak lunchtime, though the patio quickly filled up on a beautiful weekend afternoon. You will have to wait briefly while, most unusually, the hostess selects your table and places menus-on-clipboards at each place setting before taking the party thither.

We passed up a couple of the botanas ($5) as being just a bit too exotic - the Jicama con Chile y Limon (jicama root with chili, lime and salt) and the Beet Carpaccio (beets, red onions, avocado, sour cream and jalapeno).

But we can recommend all the ones we did try, starting with the chunky, fairly well-balanced guacamole, which had distinguishable lime-citrus and onion tangs (you can see the chopped onion bits as well as taste them). Ours came with exactly the right number of the crisp, firm, vivid yellow, cumin-dusted chips that accompany most food items (except for the few that come with flour tortillas) to scoop the entire amount of guac in the bowl.

We had to get a second helping of chips, however, to dip all of the salsas rojo and verde in the chips-and-salsa option. It was a tough choice, but all party members eventually agreed they preferred the slightly soupy green salsa, made from roasted tomatillos, to the chopped vegetable red. The spice in the former hits you on the front of the tongue, and of the latter on the sides and back.

Flaming Queso is The Fold’s version of queso flameado, topped with exotic mushrooms sauteed in something strong, brown and tasty,and roasted poblano peppers. Unlike most versions of this dish, the result wasn’t so much a fondue but, once the flame died, a more or less solid disk of cheese. It was easier to stick a fork in it, roll it all up inside a flour tortilla, and eat it in its entirety than to slice pieces off it - especially since the table setups include a fork and a napkin but no knife.

We saw Barlogie chowing down on a bowl of Caldo de Pollo, a traditional Mexican chicken soup, which convinced us we had to have some, too. It was pretty good - mildly spicy broth with shredded chicken with a lot of root vegetables (carrots, potatoes, etc.), topped with crema (Mexican sour cream) - but it looked better thanit tasted.

You can, by the way, order all eight botanas as “Todos - Try Them All” - for $35, which a little simple math reveals will save you the $8.50 a la carte price of the Ensalada Fold, a salad of mixed greens, avocado, pico de gallo, Jack cheese and crema Mexicana.

The portion of marinated ahi tuna in the Ceviche Rosada, paired with mango cubes, lime and avocado, is sufficiently generous to justify the $12 price tag, and was quite the best reason we found to return to The Fold.

Intrepid Companion had an immediate issue, however, with her $12 Coctel de Camarones, which was actually more of a ceviche than a shrimp cocktail. The menu says the slices of fruit tossed with chunks of wild Gulf shrimp, avocado and cilantro are supposed to be orange. And they looked like orange. But they tasted like grapefruit, one of the components of the Ceviche Blanco that we didn’t get around to trying. (Many, including some citrus fans, turn up their noses as well as their tongues at grapefruit, and it’s contraindicated if you’re taking certain medications, so if the kitchen did somehow cross its citrus wires, that’s something management needs to watch out for.)

The Fold’s tacos, like those at Local Lime, are high-end gourmet versions, pretty much the antithesis of the simple authentic Mexican tacos you get from taco trucks and taquerias (meat, chopped onions and a little cilantro on a flour tortilla) and roughly twice the price: $3 per a la carte ($9 for a three-taco plate; you can mix and match). But boy, are they good, and we tried them all:

The Tejas (grilled, spiced steak, Tecate - far as we can determine, that’s the Mexican beer - plus corn, roasted poblanos, avocado and crema.

And, for an extra 75 cents ($11.25 for a three-taco plate), The Gringo, originally to be made with bison, but a recent tornado knocked the Marshall, Ark., farm processing plant out of commission, so the kitchen has been substituting elk alongside the shaved radish, avocado and queso fresco.

The Gringo is the only one of the eight tacos to come with a hard shell. Elk, as far as we’re concerned, is just another lean red meat, actually leaner than the steak in the Tejas taco.

And maybe it’s just us being clumsy, but every taco with corn in it (and most of them have it) spilled all the corn out on the plate.

We didn’t on any of our visits save room for dessert, no matter how the wait staff pushed it.

Each table has a clear, recloseable bottle of tap water. We passed up the list of domestic, European and Mexican beers and goggled a bit at some of the $8-$12 margaritas and exotic cocktails.

But we did indulge in some of the up-price ($2.50) specialty nonalcoholic beverages - a half-liter bottle of Mexican Coca Cola (the kind made with cane sugar instead of high-fructose corn syrup) and a bottle of previously unencountered Barritts Ginger Beer, an import from Bermuda, which went surprisingly well with just about everything on our plate, especially after we squeezed a little lime juice into it. Regular, free-refillable fountain soft drinks are also available for a fairly modest $1.50.