At Least One Dead In Plane Crash Near Springdale 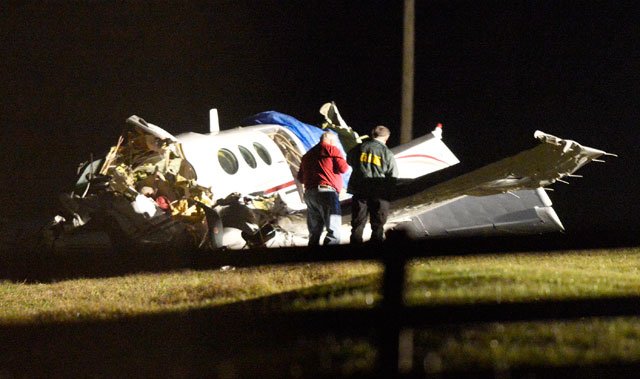 Emergency workers examine the wreckage of a plane that crashed Friday, Nov. 1, 2013 in a field south of U.S. 412 near Bennington Road in Springdale. There were no survivors from the wreck. Washington County personnnel responded to the wreck at 5:46 p.m.

SPRINGDALE — There was at least one fatality Friday evening after a plane crashed near the end of Bennington Road near the Sonora community.

The plane sat in a field, the cockpit and middle torn apart as authorities investigated the scene.

Authorities received the 911 call at 5:46 p.m., said Lt. Emily Augustine of the Washington County Sheriff’s Office. She couldn't confirm the number of people on board the plane but did say none survived the crash.

The noncommercial aircraft is a 1981 Beechcraft C90 King Air, a dual engine, propeller-driven aircraft, according to the Federal Aviation Administration. The plane is owned by J&G Aviation in Camden.

According to officials with the Springdale airport, the pilot's last contact with the airport mentioned the plane was low on fuel.

Curtis McFarlin lives down the street from where the crash occurred and said he heard a “boom” come from outside at 5:40 p.m.

“I really thought it was thunder,” he said.

He looked out the window and saw the skies were clear, McFarlin said. He pulled his boots on and left for work. His daughter, Stephanie McFarlin, said she saw emergency vehicles with sirens and flashing lights come down the street and called him shortly afterward to come back home.

Curtis McFarlin said a neighbor told him there were skid marks on the ground where the plane crashed.

Friday’s crash was the fourth in the region in the past two weeks. Augustine said she doesn’t have enough details yet to compare this crash to the others.

The Federal Aviation Administration and the National Transportation Safety Board have been notified of the accident, Augustine said. More than 10 people were working on the investigation Friday. She said she was unsure how long the investigation will take.

Gary Hull, Nob Hill fire chief, said he could confirm there was a plane crash but couldn't provide further information.