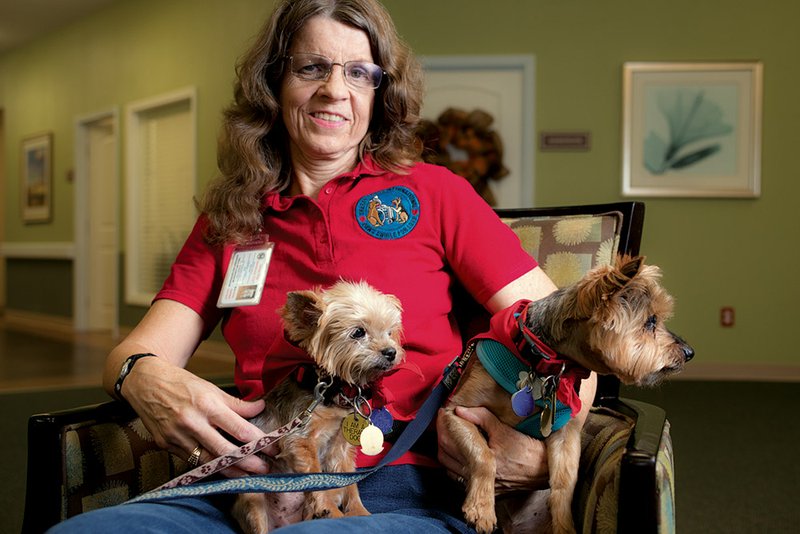 CABOT— When she read an article about Therapy Dogs International in early 2001, Kathy Shelton had no idea that her two dogs would not only become therapy dogs, but overachievers as well.

She wanted to do therapy-dog work when she read about it, so she accompanied the local chapter of Therapy Dogs International on a visit to Outlook Pointe in Sherwood, and she was really impressed by the reactions of the residents of the nursing home where the dogs visited.

This initial visit started the process for Shelton to put her totally untrained dogs into basic obedience training at the Little Rock Air Force Base. The dogs were then tested by an evaluator from Therapy Dogs International.

“It was just something I heard about, and I wanted to share them with people,” Shelton said.

Her Yorkshire terriers, Bonnie and Randy, have been visiting hospitals, nursing homes, schools and other facilities since January 2002, when they became certified therapy dogs. Shelton and her husband, Bill, had two separate “teams” when they received their first award: Shelton and Randy, and Bill and Bonnie.

In 2003, Bonnie and Randy received the TDI Active Award for 50 visits as therapy dogs.

Bill died about 10 years ago after the terriers had received their first award. After her husband’s death, Shelton wanted to continue being active with her therapy dogs because of the joy she saw on the faces of the people the dogs visited.

She had to make a new start as Bonnie’s handler as well, and catch up to Randy, who had 50 visits under his collar. Bonnie received her second TDI Active Award in December 2004.

In 2005 Randy received the TDI Active Outstanding Volunteer award for 150 visits, and Bonnie received her award in July 2006.

In December 2007, Randy was the first TDI dog in Arkansas to receive the TDI Remarkable Volunteer Award for 250 visits, and Bonnie was the second in September 2008.

Bonnie and Randy are professionals at going on visits now, and the dogs get excited when they can sit on a nursing-home resident’s lap and get a scratch on the head.

If Shelton is sitting with the dogs in the lobby of the nursing home, residents will sometimes roll by in their wheelchairs and react immediately to the terriers, and a smile soon follows.

“What I usually do is watch their (the residents’) eyes. You can usually just tell if they want to see the dog,” Shelton said.

Shelton’s dogs both received TDI Exceptional Volunteer Achievement awards in 2010 and are the only dogs in Arkansas to reach this milestone, she said.

October was a big month for the dogs, Shelton said.

This is the highest award a dog involved with Therapy Dogs International can receive.

Though Randy and Bonnie are 15 and 13 years old now (Bonnie will be 14 this month), they still get excited when they visit a nursing home.

“It’s so rewarding,” Shelton said. “It warms my heart when they react to the dogs.”