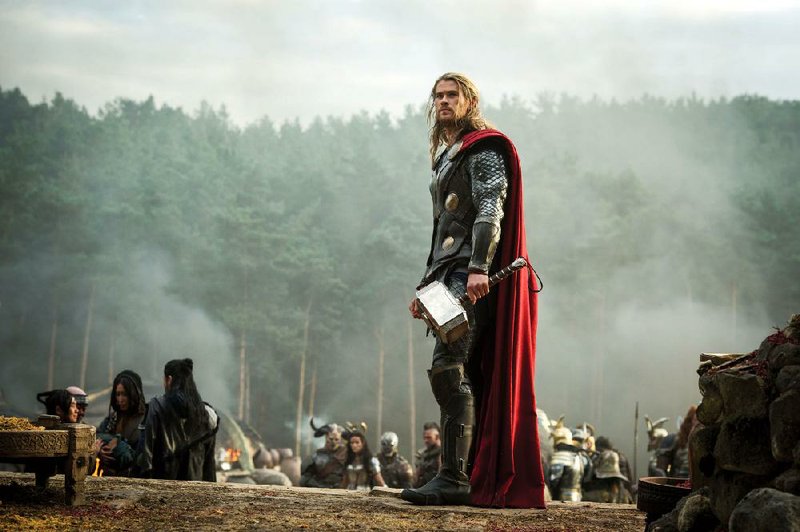 Chris Hemsworth as Thor is back with his mighty hammer, Mjolnir, in Thor: The Dark World.

Poor Thor (Chris Hemsworth) has a problem. True, there is finally peace among the Nine Realms, his bitterly vengeful brother, Loki (Tom Hiddleston), is safely confined to one of Asgard’s oddly high-tech prisons, the beautiful Sif (Jaimie Alexander) is begging for his manly attentions, and his all-powerful father, Odin (Anthony Hopkins), keeps telling him he’ll be king before too long; but Thor, ever the hapless romantic, can’t enjoy any of this because he misses his Earth-bound lady love, Jane Foster (Natalie Portman), a triple-advanced-degree-holding astrophysicist, who is working out of London and pining, much like Thor’s magic uru hammer, for her thunder god to return to her hand.

Truth to tell, Thor has always been a bit of a drip. He was the last Marvel superhero any of my friends and I would have selected as one of our favorites. The bogus Shakespearean language was oft-putting (lots of “thous” and “thines” and “yons”), to be sure, but he also simply wasn’t much fun. He took himself extremely seriously - which, I suppose, is fair enough, being a god and all - even when he, like his cinematic counterpart, engages in the most silly of soap opera machinations.

Marvel Studios realized this, of course, so their version of Thor (released in 2011) was made with a younger demographic very much in mind. Gone was the high-falutin’ language and gone, too, was Thor’s utter seriousness. Buff, good-humored and stunningly handsome, they cast Hemsworth to appeal to the widest possible base, and cannily made Thor’s adopted brother, Loki, the god of mischief, the fulcrum of the film’s drama. Unlike, dull, stolid Thor - a fight-loving, ale-swilling offensive lineman-type - Loki was all tricks and malice, eaten up by jealousy over the preferential treatment his adopted parents bestowed on their true progeny, while burning for Odin’s throne. As directed by notable Shakespearean veteran Kenneth Branagh, the first film was at least half-interesting, although it sagged noticeably whenever Thor spent time on Earth with Jane and her wacky assortment of snarky friends(including Kat Dennings, who continues her comic relief role in the new film).

For the sequel, we have a new twist in the Thor/Loki relationship. Due to the unexpected return of a cadre of evil dark elves, led by the pony-tailed Malekith(Christopher Eccleston), in hot pursuit of an incredibly powerful substance known as “aether” - a mystical, swirling liquidlike substance that somehow uses Jane’s body as a host - the half-siblings are forced to join forces in order to defend their realm. Naturally, Loki is virtually impossible to trust (almost by definition), but the two make their way through multiple worlds in search of Malekith and the enormously destructive power he is wielding.

Hiddleston, a brilliant British actor with a bevy of serious roles on his resume (including 2011’s gripping The Deep Blue Sea), might be one of the best casting decisions Marvel Studios has ever made. A perfect foil to Hemsworth’s bulging pecs and wooden countenance (the King’s English again does not escape his muddy Australian accent), Hiddleston’s Loki is craven, pale-faced and sarcastic to the core, a dark, stringy-haired Puck to Thor’s dim Demetrius. As Hiddleston plays him, Loki is the kind of dude you’d spy in your English seminar drinking absinthe from a hip flask and reading lots of Blake. You might admire Thor, but you’d definitely want to hang out with his twisted half brother.

Not unlike Heath Ledger’s Joker in The Dark Knight, when Loki is off-screen, the film’s energy begins to lag, even if the screenplay, by Christopher Yost and Christopher Markus (among a horde of others), tries to inject as many Joss Whedon-esque jokey banalities as it can (there’s a bit when Thor first enters Jane’s apartment and hangs his mystical hammer on one of her coat hooks that absolutely killed at the screening). For all that, there’s still not terribly much here to work through. Things happen very quickly and often with an expensive assortment of high-end CGI effects and just as quickly, problems are resolved and enemies thoroughly dispatched. We get no further inkling into Thor’s character, nor Jane’s, other than for a much-decorated astrophysicist she has very bouncy hair.

Director Alan Taylor, a TV veteran, has made the equivalent of a big-budget episode of a network action show, moving so quickly from scene to scene that his characters never get much of a chance to breathe, let alone feel sentient. The best comic-book films - admittedly, almost as rare a commodity as the ivory-billed woodpecker - don’t lose sight of the scope of their characters, and allow them at least some kind of contemplation and insight into their condition. For all its source material’s Shakespearean entreaties, this Thor movie takes an almost comical lack of interest in its characters’ state of mind.