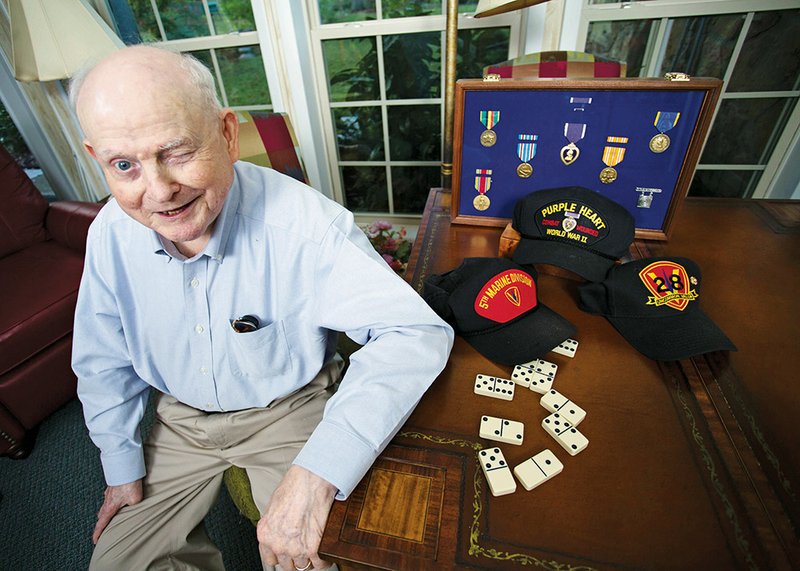 Charles Wright served in World War II at Iwo Jima, was shot twice and still has shrapnel in his head. His military company raised the flag in the iconic Iwa Jima photo.

He is paralyzed on his right side. He is hard of hearing. He is legally blind. And his memory has started to fail. All because of two bullets he took to the head during the Battle of Iwo Jima.

But he still has his sense of humor.

“I was born right-handed, but I’ve been a southpaw since World War II,” he said with a smile, one of only a few he managed during a recent photo session at his home in Conway. When asked again to smile for a photo, Wright pouted with his lips instead.

“Do you know the difference between a smile and a frown?” he asked his visitors. “It’s just a matter of opinion.”

Wright was drafted for service in World War II on June 2, 1944, just five days after he had graduated from Conway High School. He was just 18, the son of the late Benjamin F. and Lucille Marie Wright. He was part of the 5th Marine Division.

Wright, now 87, qualified as a rifleman and spent boot camp at the Marine base in San Diego, Calif.

“That was a pretty good site,” he said.

He did additional training at Fort Pendleton, Calif.

According to information found in the booklet “Veterans Day 2012: Honoring Our Veterans,” compiled by Julie Goodnight of Conway, the 5th Division landed on Iwo Jima on Feb. 19, 1945. More information found online said the division fought on Iwo Jima from Feb. 19 to March 18, sustained 1,098 killed in action and had 2,974 wounded. Wright was among the wounded.

Wright was waiting offshore with part of the 5th Division when the American flag was raised on Mount Suribachi on Feb. 23, 1945. On March 24, 1945, Wright was wounded — shot twice, with one bullet going through his head and the second bullet lodged against his brain, causing paralysis to his right side. He was on the ground for hours before members of his unit finally found him. They thought he was dead.

Wright said if he had been shot in the foot, he might have died.

Iwo Jima was secured on March 26, 1945, two days after Wright sustained his life-threatening injuries, and members of the 5th Marine Division sailed for Hawaii, Wright among them.

He was awarded the Purple Heart for his service, along with several other medals. He told his daughter Donna Wright that the Purple Heart is for “those who did not dodge the bullets fast enough.”

Honorable Service and Honorable Discharge. He was discharged on May 10, 1946.

Wright bears no grudges against the Japanese. “They were just doing their jobs, just like I was,” he told his family.

Charles and his wife, the former Esther Gill of Vilonia, were married Aug. 3, 1951, a few years after he returned home from the war.

“I’d known him all my life,” Esther said. “I was only 14 when he was drafted. When he returned home, he always wanted to date me. I would never go out with him.

“I had heard that we were third cousins, and I’d always been told you couldn’t date a cousin,” she said. “But one night we went to a Travelers baseball game in Little Rock, and I fell asleep in the car. I woke up and asked him where we were going.

“He said, ‘Benton.’ You could get married in Benton without a blood test. So I guess you could say he kidnapped me to marry me.”

When asked what he had wanted to be in life before he was drafted, Wright said, “An airplane flier.

“I thought about flying planes, but that took a lot of skill. I didn’t have those skills. I had ambition but no skills.

“Ambition is what you would like to do. Skills are what you can do. That’s the difference.”

Wright attended Arkansas State Teachers College [now the University of Central Arkansas] after he returned to civilian life, but his wife said he was really not able to do any studying because of his injuries.

He has continued to have health problems, including two silent heart attacks and a massive stroke. But while he was able to, he and Esther traveled a lot.

“We waited until the kids were grown, and then we traveled to places like Europe and Australia,” she said, noting that the couple have another daughter, Karen Ward of Little Rock, and a granddaughter. “We’d like to take him to see the World War II Memorial in Washington, D.C., but I don’t think he could get through the airports very easily.”

Esther said Wright spends his days playing dominoes and watching TV. He is always ready to go places at the drop of a hat.

“I take him wherever he wants to go,” Esther said.

The Wrights plan to attend the Veterans Day Celebration on Monday at Julie’s Sweet Shop.

“We’ll have to get up before dawn in order to get there and get a seat,” Esther said, “but we’ll be there.”