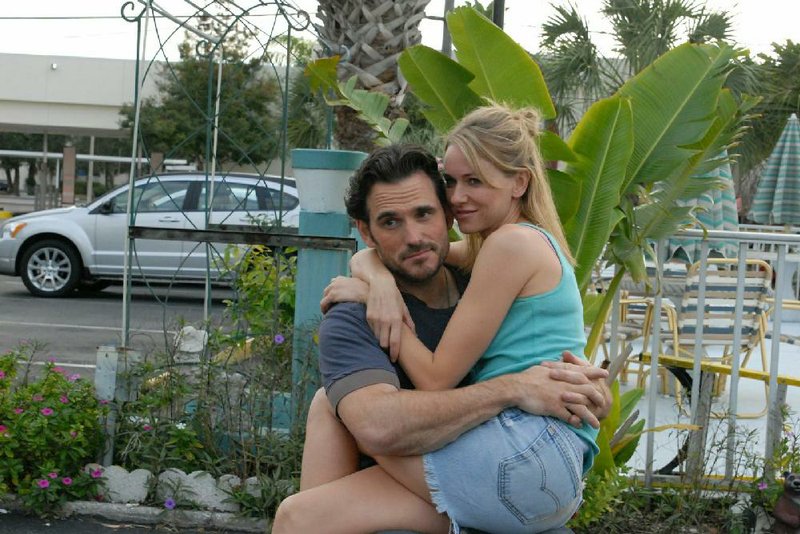 Richie (Matt Dillon) and Melissa (Naomi Watts) are trying to get by on minimum wage jobs and disability checks in Laurie Collyer’s gritty Sunlight Jr.

Sunlight Jr. takes its title from the Clearwater, Fla., convenience store in which Melissa (Naomi Watts) works. It’s the sort of place most of us find ourselves in from time to time; it carries bread, milk, beer, candy bars and cigarettes you can buy for slightly more than you might pay for them in a grocery store. The idea is you pay a little more because the store saves you time - you don’t have to go up and down a lot of aisles looking for the few items you need; most of the other patrons are only buying one or two items so even if there’s a line you can be in and out in a few minutes. Everything about the place is designed to facilitate quick and easy shopping - which is another way of saying that it’s not the sort of place most people would want to hang around for too long. It’s harshly bright and the walls are glass and there are surveillance cameras staring at your back. Most people don’t hang around in these places long enough to feel exactly how depressing and dehumanizing they are.

But Melissa stands there, for eight hours a day or however long her shift is, making minimum wage and enduring her crass manager, which is almost enough to keep her and her boyfriend, a paraplegic named Richie (Matt Dillon), ensconced in a cheap motel room, with food and beer and just about enough gas to keep their beater running. Over the course of Laurie Collyer’s beautifully calibrated movie about being underemployed and striving in America, we learn only a few things about Richie: He used to work construction, where he made some “good money” before he fell off a building and lost the use of his legs. He is good at fixing obsolete electronics. He drinks a bit.

But the salient fact about Richie is that he loves Melissa. He genuinely, truly, deeply loves her. He dotes on her, he tries to keep her safe, he encourages her mild dreams of somehow going to college and doing better for herself. But Richie is limited. He can’t walk, and every time he gets in or out of his car occasions the laborious assembly or disassembly of his wheelchair. He is not able-bodied and his gift for kenning circuitry doesn’t translate to the age of silicon. So he endures a ration of bureaucratic humiliation in exchange for a disability check.

But Richie and Melissa are, after a fashion, happy. Their day-to-day existence is not without joy. Their problem is that of a lot of Americans: They have absolutely no margin for safety, and their comfort is constantly imperiled. They live check to check, scraping together what they can. Any sort of unexpected expense can send their livers spiraling out of control.

Some people might point out that Richie and Melissa have contributed to their own problems. Richie had money when he was working, before he was hurt, but he spent it. He gambled and drank it up. Melissa made some bad choices herself; her ex-boyfriend Justin (Norman Reedus) is a piece of work, a drug dealer who also happens to be her mother’s landlord. (The mother, a benignly neglectful slattern slyly played by Tess Harper, supports herself on the money the state provides her for fostering children.) Lately Justin has taken to showing up at Melissa’s workplace, alternately harassing her and plying her with pills.

If you are the sort of person who has never worked in a convenience store or known people who worked in convenience stores, you might think Collyer’s movie is a bit over the top and shrill. On the other hand, if you’ve read Barbara Ehrenreich’s Nickel and Dimed: On (Not) Getting By in America, you might understand that what you’re seeing on-screen is a pretty accurate picture of how a lot of people try to live in America.

I hope I haven’t scared you off. While it’s true Sunlight Jr. could be perceived as a dreary downer, there’s a kind of magic in the chemistry between Watts and Dillon.Even though they’re both too pretty to play street-roughened losers (Watts shines through her ill-fitting uniforms, Dillon retains a leading man’s indomitability), they convince us they matter to each other. They communicate something elemental and true about the world. However brutal it might be, they give each other reason to persist.