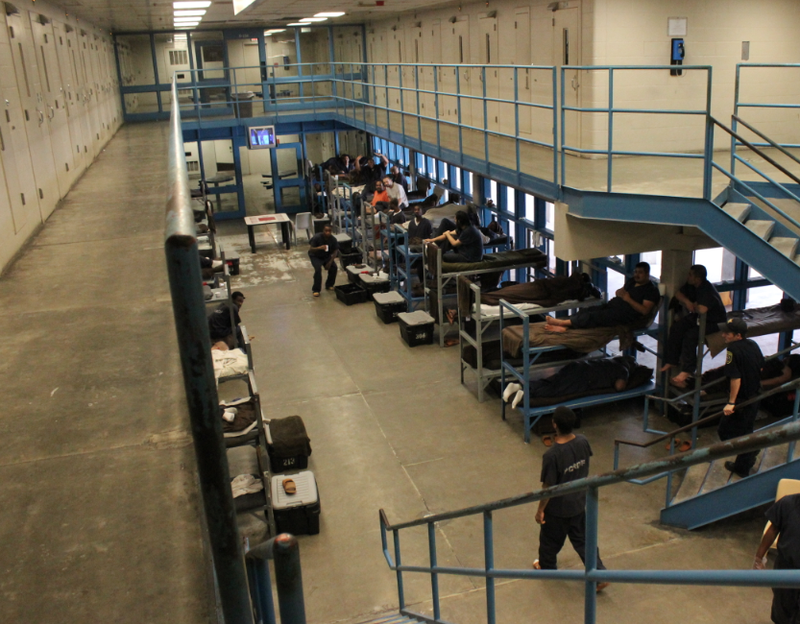 Temporary bunk beds line part of the Pulaski County jail's general population D Unit, where about 140 inmates were being housed Monday. It should hold 96 inmates.

Overcrowding at the Pulaski County jail has become such a problem that the facility may have to close to all but violent offenders, Sheriff Doc Holladay warned Monday.

Holladay said changes in the state parole and probation system have resulted in an influx of state prisoners being held at the Pulaski County jail in Little Rock, taxing its space and resources and creating potential safety issues. On Monday, the facility housed 1,298 inmates. It's supposed to have no more than 1,210.

Holladay said there is a real possibility that without immediate changes the jail will "close," meaning it will start being selective about who it allows to be booked in. He said that could happen in the next "week or so," though space would be found regardless of what happens for violent offenders.

"I'm still hopeful it won't come to that," Holladay said Monday. "But I cannot allow the population to continue to grow because it becomes critical in terms of staffing and danger involved to staff and other inmates as well. When they are in such a crowded atmosphere, tempers get short, things happen."

Holladay said the jail has ordered additional mattresses to deal with the influx, but the problem needs to be addressed by the state. Many of the state inmates have been sentenced to prison and are awaiting placement in that system or have had their probation revoked. There were nearly 400 state inmates in the facility Monday.

"The county jails are not the place for us to hold them long-term, and it's gotten to the point that if they continue to house them in the county jails and they're not finding space in the state system ... it's impacting our ability to service local law enforcement," Holladay said.

A number of changes have been made to state Department of Community Correction after a June 17 article in the Arkansas Democrat-Gazette revealed the lengthy parole-violation history of Darrell Dennis before his arrest in the kidnapping and killing of 18-year-old Forrest Abrams on May 10. That killing came days after Dennis was released from the Pulaski County jail, where he had been held on an absconder warrant.

Gov. Mike Beebe while announcing findings of an investigation into the agency earlier this month acknowledged the changes to the system created a backlog of state inmates in county jails. He estimated the state would owe county jails up to $8 million to pay counties back for housing the inmates.

Holladay said he will meet soon with the heads of local law enforcement agencies that use the Pulaski County jail to discuss the issue, which he described as reaching a "critical" stage.