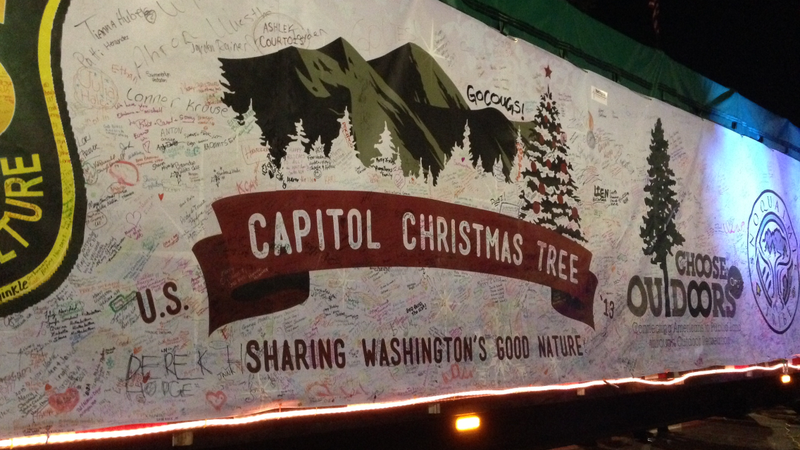 The Capitol Christmas tree made its lone stop in Arkansas on Tuesday evening at the Base Pro Shops in Little Rock on it's "Whistle Stop Tour." The tree is making the trek from Washington state to Washington D.C., where it will be displayed throughout the Christmas season on the lawn of Capitol Hill.

The celebratory Christmas tree that will make it’s home on the lawn of Capitol Hill this holiday season made a stop in Little Rock on Tuesday on it’s cross-country trip to Washington D.C.

The 80-foot tall Engelmann spruce was on display under a tarp in the parking lot of the new Bass Pro Shops Outdoor World in southwest Little Rock as part of the "2013 Capitol Christmas Tree Tour." The tree will remain there until 8 p.m. Tuesday night for anyone hoping to get glimpse of the tree that is viewed as the one of the more recognizable Christmas decorations in the United States, from it’s numerous television appearances and various holiday celebrations that will occur in the nation’s capitol.

The tree comes as a gift from Newport, Washington and measured around 89 feet tall before it was cut down. It weighs between 8,000 and 10,000 pounds and is 79 years old, according to Capitol Christmas Tree Coordinator Jen Knutson. The tree will be placed on the west lawn of Capitol Hill once it reaches Washington D.C.

Several sponsors of the event also set up booths around the tree, including the Little Rock Convention and Visitors Bureau and Pulaski Technical College. Knutson said they reached out to the city of Little Rock, who set up the event at Bass Pro Shops.

Visitors to the event were also invited to sign the tarp covering the tree.

The tree is a part of a 49-year tradition of one state donating the tree to the Capitol Hill display, with last year’s tree coming from Colorado. Part of that tradition included around 5,000 residents Washington state decorating the tree with nearly 10,000 lights and 9,000 ornaments, Knutson said.

The tree is making 27 stops on it’s tour from Washington state to Washington D.C., coming from Dallas last night and making an appearance in Nashville, Tenn. tomorrow night.