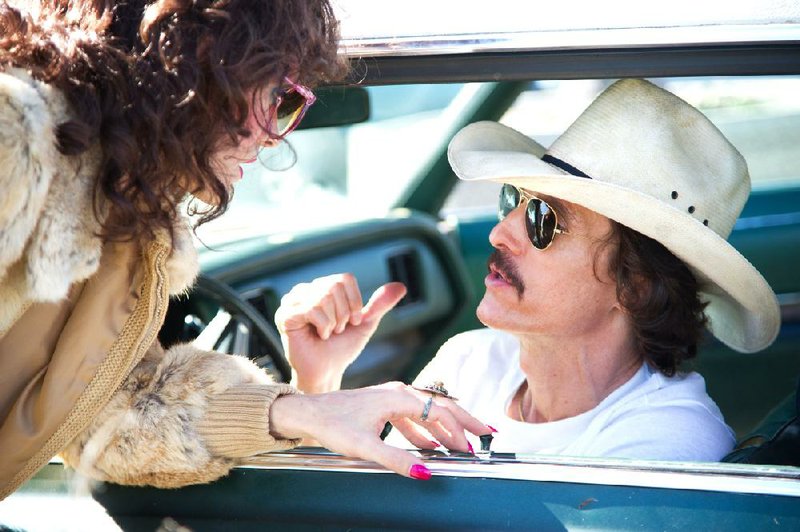 As depicted in Jean-Marc Vallee’s Dallas Buyers Club, which soaked up a lot of praise during its premiere at this year’s Toronto International Film Festival, Ron Woodroof was as unlikely an AIDS activist as you might imagine. A scrawny, macho bull rider, electrician and general grifter in a 10-gallon hat and a pair of cowboy boots, he was a hard drinker who took drugs with wild abandon and mowed his way through a vast selection of Texas hookers and rodeo groupies as a matter of course. He was also homophobic, hostile, and always looking for the most advantageous angle for himself, but it turned out, to his astonishment, he was also stricken with the AIDS virus back in 1985. If medical dramas have taught us anything it’s that fatal disease makes for a hell of a great equalizer. Worrying about your own mortality can transform nearly anyone into a humanitarian when push comes to shove.

Which isn’t to say Woodroof didn’t go kicking and screaming into his new found empathy. As played by Matthew McConaughey (who can just go ahead and book his flight from Austin to L.A. in time for the Oscars), he’s a pretty loathsome reptile of a man when we first meet him. Schmoozy, underhanded, and a fountain of violence and homophobia, he first takes the news from his doctors that he is HIV positive and has about a month to live with complete denial (“I ain’t no faggot! I don’t even know no faggots!” he screams), followed by a bender of drink, drugs and hookers, but soon enough his health deteriorates enough that he has to face facts.

One thing you can say about the man, though, is he’s nothing if not resourceful. In short order, he goes to a library, researches the disease and is back at the hospital demanding the drug AZT from his attending physician, Dr. Eve Saks (Jennifer Garner). Told the FDA has yet to approve the drug, he quickly connives a way to get his own supply from an orderly, but when that fails to help him, in desperation he heads to Mexico, where a kindly but disgraced American doctor (Griffin Dunne)sets him straight with a series of as-yet-unapproved drugs.

Seeing a business opportunity, Woodroof quickly sets up shop back in Dallas, selling many of these drugs to desperate patients, including Rayon (Jared Leto), a beautiful, elegant drag queen who knows the community well enough that Woodroof eventually makes her a business partner. The two of them then set up a Buyers Club, wherein the patients pay a flat monthly fee for all the under-the-counter medications they can hold. Business quickly begins booming, which gets the attention of both the FDA and local medical officials, who have been aggressively testing AZT alone as a potential solution to the HIV problem.

McConaughey, whose career resurgence has reached its apex, is nothing short of a marvel here. Losing an enormous amount of weight (he’s as skinny as a 12-yearold girl) to create the physical embodiment of the man is only a small part of what he has done. Sly, swarthy and, eventually, generous, he plays the role full tilt. The charming cowboy stuff has always come easy to him, but now he’s playing off that persona to create something truly mesmerizing.

Leto, too, given such a dramatic role after so many years away from the screen (concentrating on his band, 30 Seconds to Mars), is excellent, pushing his performance into something just enough removed from caricature while retaining the tortured soul of Rayon. He has never been better than in a particularly painful scene in which Rayon goes sans makeup in a far-too-big suit to his father’s bank to plead for enough cash to pay Woodroof back for his kindness. It’s heartbreaking to watch him having to play-act as something his father might have actually respected, like a young child donning his father’s enormous shoes and hoping for a scrap of attention.

Dallas Buyers Club is a powerful film, at times reminiscent of another film about an iconoclast challenging the government, but unlike The People vs. Larry Flynt, it’s not so hell-bent on lionizing the man and turning the government into the evil empire.

McConaughey and French-Canadian director Vallee work tirelessly to ensure their depiction of Woodroof never wavers into symbolism. You don’t view Woodroof as some kind of martyred humanist; he’s entirely flesh and blood, easily bruised and more often than not, thoroughly pissed off; a survivor, at least to a point, but hardly a saint.

If there’s a simple truth to be found here, it is how often it is only the most resourceful and self-absorbed of us, demanding to survive no matter what, who come up with new pathways of survival.