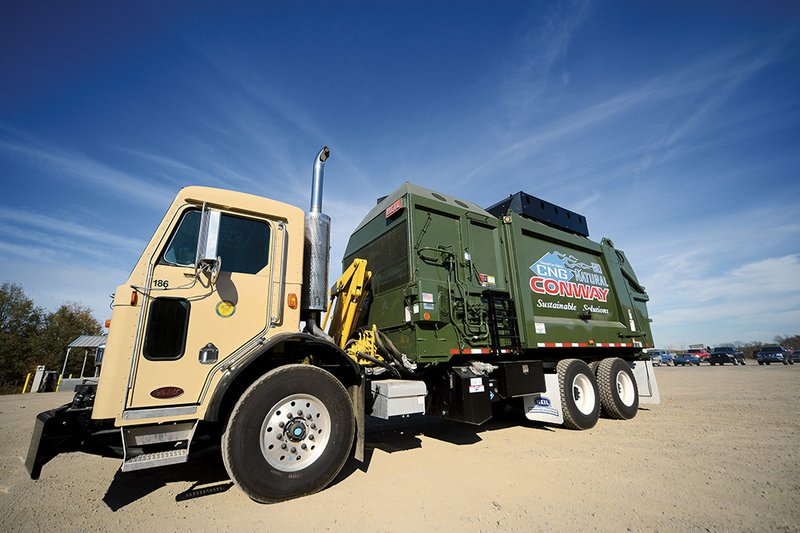 The Conway Sanitation Department bought its first compressed-natural-gas sanitation/recycling truck, which was delivered last week. It is waiting for its driver, Chris Greenhall, who was on vacation last week, said Cheryl Harrington, director of the department. The truck will be on its residential route Monday, she said.

CONWAY — Not everyone would call a new trash truck “pretty,” but Cheryl Harrington, director of the Conway Sanitation Department, is especially excited about this one.

The department has its first compressed-natural-gas trash/recycling truck in the fleet.

The $257,800 side-loading truck arrived Monday, Harrington said. It was purchased from River City Hydraulics in Sherwood.

Harrington said the timing was right.

“No. 1, we now have two CNG (as it’s commonly referred to) fueling stations in Conway,” she said. “The price, I think it was $1.50 the last time I looked, and diesel was twice or more.”

She said the department should save $60,000 over a five-year period in fuel costs alone. Harrington said the trucks are replaced every five years.

The department’s fleet, with the addition of this one, includes 20 trash/recycling trucks.

“For us, it was just a win-win, and being environmentally conscious, going with natural gas goes along with our mission here.”

The 2013 Peterbilt truck will be used for residential trash and recycling pickup, Harrington said. An automated sidearm picks up the blue and green carts, giving the trucks their nickname, “one-armed bandits.”

She said that for the past three years, the department has gotten Go RED! grants to help buy reduced-emission diesel trucks.

Howard said the federal money is awarded through the Arkansas Department of Environmental Quality.

“We had purchased trucks that burn diesel more efficiently and cleaner so not as much emissions are put in the environment,” Howard said. “Even with that, diesel is so expensive. This is a cleaner-burning fuel,” she said of compressed natural gas.

“It’s just progressing our department even further than we’ve been able to do in the past.”

Howard praised Harrington for being forward-thinking.

“She just never stops,” Howard said. “We’ve been recognized for not doing the status quo and trying to improve our services and our programs for our residences and businesses, but she never wants to stop at that.”

Harrington said three more CNG trucks are scheduled to be purchased next year.

“We’re also down in Louisiana, and we’re in the process of selling 38 of them in Louisiana. It’s something that’s coming; I can tell you that,” Williams said. “The city of Little Rock’s looking at it; they haven’t done anything,yet.”

Harrington said the new truck will be on the road Monday. She said the employee who gets to drive it, based on seniority, was on vacation last week.

“It’s in the parking lot just showing off before it goes on the road and gets a limb or something,” she said, laughing.