He came to Arkansas to be a Razorbacks linebacker. Since then, David Bazzel has tackled a series of big jobs with enthusiasm and team spirit. by EVIN DEMIREL SPECIAL TO THE DEMOCRAT-GAZETTE | November 24, 2013 at 4:09 a.m. 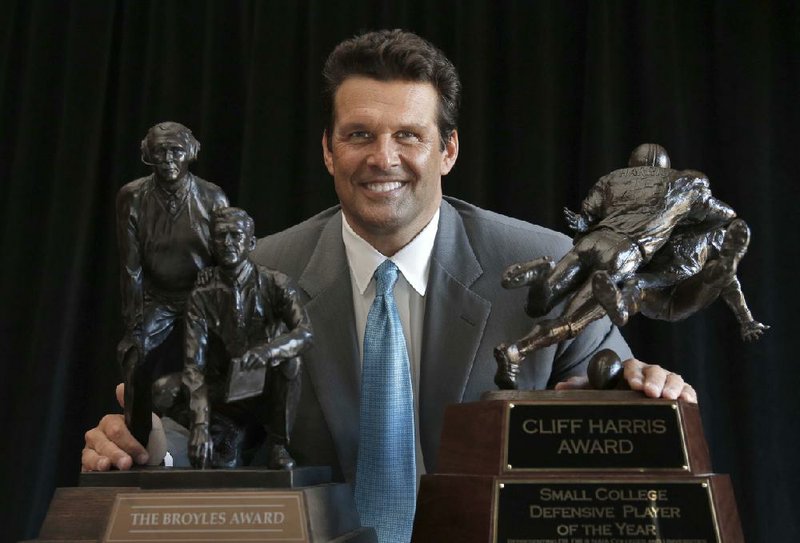 For a blessed moment, there’s time to pause. Most of the capacity crowd who have shown up to this early November meeting are gone, but those who remain drift to the front and mingle. There, Little Rock Touchdown Club founder and president David Bazzel chats with board members Rex Nelson and Jim Rasco.

In a few minutes, he’ll step off the dais and talk to Democrat-Gazette reporter Jeff Halpern, then hand a small white football to the day’s featured speaker, Steve Sullivan. The KATV sportscaster will add his autograph to those of 10 other keynote speakers, including Bret Bielema, Dan Hampton, Jeff Long and Tom Osborne.

For now, Bazzel allows himself a few seconds standing behind the podium. Arms folded across his chest, he surveys the Embassy Suites ballroom, smiling. The continual five hour nights of sleep and the years without a true vacation have been worth it. The plans of Arkansas sports’ pre-eminent idea man are falling into place.

As a 5-foot-11 Razorbacks linebacker from 1981-85, Bazzel once racked up 113 tackles in a single season. Since then, he has tackled an equally prodigious number of jobs, projects and causes. He has been a Gold’s Gym marketing director, fitness guru, University of Arkansas marketing consultant, KARK sports anchor and Buzz 103.7 FM morning show co-host - count this last one among his present occupations. Experience in these worlds, along with his chiseled good looks (Bazzel was selected as the Arkansas Times’ “Sexiest Man” for 16 straight years), has allowed Bazzel to become the rare ex-athlete whose name is better known now, long after his playing days are over, than then.

He’s chiefly responsible for the Little Rock Touchdown Club and consulted on the one in Northwest Arkansas, bringing in some of the sport’s biggest names. He has also founded or helped create the Cliff Harris Trophy, which honors the best player among all small colleges around the nation, covering a far wider range than any previous college football award; and the Frank Broyles Trophy for the nation’s outstanding major college assistant coach; and the “Golden Boot” trophy awarded to the winner of the LSU-Arkansas football game.

(This summer, the Broyles Award was included in EA Sports’ NCAA Football 14, the latest in the college football video game franchise. Its winner takes part in the annual Home Depot College Football Awards Show, to be shown on Dec. 12 on ESPN.)

“David Bazzel has done more to promote Arkansas sports - specifically football - than anybody with the possible exception of Frank Broyles,” says Bruce James, a former Razorbacks All-American, and a friend.

High praise, for sure, but is it hyperbole?

No, “I think that’s accurate,” says Broyles himself, adding that he has long been impressed by Bazzel’s people skills, work ethic and energy. EARLY ON

Bazzel’s mother, Carolyn Branch, recalled her only child often waking up at 5 a.m. to grab a fishing pole and head out to one of the canals near their Panama City, Fla., home. His bedroom decor made his affinity for fishing nearly as obvious as his love for baseball and football. “Instead of having pictures of girls all over his wall, he had posters of fish.”

Bazzel excelled in football and became an all-state linebacker sought by the likes of Georgia, South Carolina, Florida and Florida State. Most of his family wanted him nearby, at Tallahassee, but Bazzel sought out a place without a fractured fan base, like his hometown, whose caps and sweatshirts bear their allegiances: Gators (the University of Florida), Seminoles (Florida State University), the “U” (Miami), even ’Dogs (Georgia) and Golden Eagles (Southern Mississippi).

He also thought Razorbacks fans’ allegiance would provide ample opportunities after his college career. After much prayer, Bazzel picked Arkansas.

In 1981, he arrived in Fayetteville knowing only two people, the coach who’d recruited him and a Razorbacks cheerleader he’d met on the beach. He majored in community service and on Sundays lit out by himself to community centers to mingle and give short talks to church, senior and youth groups. Ken Hatfield, Bazzel’s head coach during his junior and senior years, said his All-Conference captain seemed to eschew NFL ambitions in favor of building off-campus relationships, “knowing that was going to pay dividends for the rest of his life.”

Bazzel estimates he has given more than than 2,500 speeches, many for free, to various civic groups, church groups, schools and charity events. Some of his favorite stories involve listening to 80-and 90-year-olds recalling life in the early 20th century.

He cherishes tradition, but doesn’t see it as something that should never be altered. Traditions should be modified to keep up with the times. Moreover, he says, there are new ones to be made. And he’s going to make some.

During the holidays, Osborne employed Bazzel to get millions of Osborne Family Lights - originally located around his home on Cantrell Road - put up in Memphis’ Graceland and Orlando’s Walt Disney World. “I always had these huge dreams I was trying to catch,” Jennings told the Democrat-Gazette in 2003. “I would put him out there trying to catch the rainbow, and he’d catch it. He can do anything.”

Osborne died in 2011, but Bazzel carries the legacy. He helped Osborne’s daughter, Breezy, develop and market a 5K charity run in her father’s memory. He has about 4,000 contacts in his cell phone, which has come in handy to secure sponsors for the Dec. 14 Little Rock run.

He has also contributed to the college football world what may be the trophy equivalent of the Osborne Family Lights: a 24-karat Golden Boot. It weighs nearly 200 pounds and stands almost 4 feet tall. Bazzel brainstormed the trophy, which depicts the geographical outline of Arkansas and Louisiana contiguously, in 1996 as a way to further highlight the budding SEC rivalry between the Hogs and Tigers, which was starting to be played on CBS in front of a national audience the day after Thanksgiving. He thought making the trophy the nation’s biggest would catapult the game to the center of college football’s widening web of “rivalry” games.

The Razorbacks haven’t been able to say these words in three years, and the odds for regaining the trophy this Friday in Baton Rouge are not in their favor. Louisiana State has won only half of its first six SEC games, but Arkansas has lost all six.

The Hogs are down this season, but Bazzel, like so many fans, believes this turbulent fall is a down payment on future success. He knows winning more off-field recruiting battles is crucial to building a winning program. He knows anything that promotes the Razorbacks brand nationwide helps, and that’s one reason for an assistant coaching trophy in Broyles’ name, an award he began pitching almost 20 years ago.

At first, Broyles was hesitant. He brought in longtime assistant Wilson Matthews to blitz Bazzel. “They were both going to make me prove I was confident in what I was doing,” Bazzel recalled. “They wanted to hear, ‘How are you going to execute this? What are the steps? How are you going to get your finances?’”

That last part proved to be tricky. Bazzel didn’t yet have sponsors, and it was difficult to find donors because Broyles had asked that he not take money that would have otherwise been donated to the University of Arkansas’ Razorback Foundation, the nonprofit fundraising arm of Arkansas athletics.

In 1996, Bazzel borrowed about $100,000 from Capital Bank to launch the award. To make everything in the event first class - from the banquet to accommodations for the five major-college assistant coach nominees and their families - the expense was worth it, he said.

“It’s the names on these things. You can’t just walk out there with a big trophy and then not run [the show] well.” ‘IMPACT PURPOSES’

Bazzel spoke these words from the passenger seat of his new Dodge Charger while his girlfriend, Shantell Kelly, shuttled him out to Russellville to pick up the new Cliff Harris Award trophy from the sculptor. The plan was to unveil the trophy, given to the best defensive player in Division II, III and the National Association of Intercollegiate Athletics, at the Nov.16 game between Henderson State University and Ouachita Baptist University - another rivalry game called the Battle of the Ravine. Harris played at OBU before setting out on an All-Pro career with the Dallas Cowboys.

The Little Rock Touchdown Club will announce the winner in January. “It’s really fun to do something that gets results,” he said. “And you don’t always hit home runs. Sometimes you stumble out of the gates.”

One of Bazzel’s most memorable stumbles came after Broyles had hired him as a UA marketing consultant in the mid-1990s. He wanted to augment the “Hog Call” with a new chant used when the Razorbacks defense really needed to make a stop.

The “Root Hog” was meant to evoke the sound of a pig digging into the ground with its nose. “It almost sounds like a guttural ‘boo’ but it’s a root-root,” Bazzel recalls.

During halftime of a home Razorbacks basketball game, Bazzel made an “awkward” debut with the chant, according to one online message. “He’s wearing a leather jacket as he explains how you do the cheer,” writes H-O-double G on Hogville.net. “Then right before he starts the cheer, he stops and takes off his jacket, to which he had on a cut-off sleeve muscle shirt … and then he says, ‘Now I know not everyone here has guns like ol Bazzel.’”

Reminded of this event, Bazzel laughs. “Who knows, I might have said something like that. Anything to get their attention at halftime.”

“That was strictly for impact purposes.”

The “Root Hog” has long been discarded - the grunting sounded too much like a digestive stirring - and so have Bazzel’s signature muscle tees.

Regrets? Sure, but not for those two. No ideas man bats 1.000, after all, and for good ideas to flourish, others must wither.

Bazzel doesn’t find much time to exercise these days. He can’t hang out with his friends as much as he’d like. The more time he spends in front of the cameras and microphones, the less time he can talk to kids in need, give them hugs. Bazzel was once married for three and a half years, but he didn’t have kids, and the prospect seems increasingly unlikely.

“For whatever reason, probably, the kid thing is not going to work out. It’s OK. I’m OK with it.”

What family Bazzel has made away from his hometown, he has made from an entire state of football fans. Think him off-key occasionally, certainly self-promoting, but not unloved. Everyone from Frank Broyles to Buzz listeners feed off his energy and laud his efforts.

“I’m not an artist, so I don’t know what an artist does,” he says. “But I do know this - I like to create things.”SELF PORTRAIT

WHAT’S ALWAYS BY MY BED: My silver MacBook

MY RETREAT IS: The gym or watching an episode of reality TV shows American Pickers or Pawn Stars

MY LAST MEAL WOULD PROBABLY be a cheeseburger and french fries.

MY FAVORITE CITY OUTSIDE OF ARKANSAS: Panama City, Fla.

MY IDEAL VACATION is on an island somewhere far away.

IF I WERE MAROONED ON A DESERTED ISLAND, I WOULD HAVE TO HAVE: My girlfriend

ONE WORD TO SUM ME UP: Aware