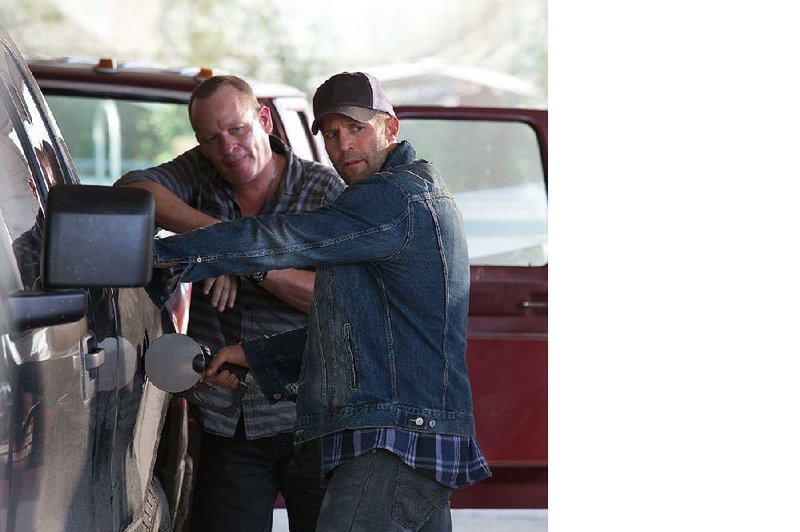 Stuart Greer, shown here with Homefront star Jason Statham, is making a living as a movie actor while remaining based in Arkansas.

“I was kind of hoping you wouldn’t ask me that,” says Stuart Greer, a giggling 53-year-old actor about how he has managed to make a living while living in central Arkansas.

Part of the answer is that there’s work to be found next door in Louisiana, where Greer spent three weeks shooting Homefront, in which he plays Lewis, a thug who menaces Jason Statham (The Transporter) as a retired Drug Enforcement Administration agent. Apparently, Lewis hasn’t seen what usually happens to people who cross Statham in movies. In one scene Lewis tries to prevent Statham from fueling his truck. In another, he torments Statham in a boathouse. The star responds by making ordinary objects into lethal weapons. Boat batteries can be repurposed for frightening new uses.

“The audiences for Statham really like his pictures and that’s the kind of stuff they want, and they get it in this one, I hope.” He adds, “This was the most incredible stunt team I’ve ever worked with on a picture. These guys, they were the real deal. It was pretty labor intensive. I really earned the money.”

If Statham delivers a serious make-believe beating to his co-stars, Greer says that director Gary Fleder does just the opposite.

“We’d worked on Runaway Jury back in 2002. It was a much smaller role, but it was kind of pivotal for the film. When it came time to do this, Gary kind of remembered me. When he asked me specifically for this role in Homefront, I was thrilled to do it because he’s a great guy. He likes a lot of input from the actors on character and a character’s motivation in a scene. We did improvise - I don’t want to step on anybody’s toes because I have an immense respect for Sylvester Stallone [who wrote and produced Homefront]. I won’t tell you what dialogue Fleder and I came up with, but it was not a great deal. That’s the way I like to work. I don’t want to be bound by what’s on the page. Gary’s that way. It makes me feel like I’m being taken seriously as an actor. He cares about what I want to do.”

Greer has had roles in I Know What You Did Last Summer, Remember the Titans, Take Shelter, Mud, The Apostle, Prison Break, The Glory Road and The Gift. He left the University of Arkansas at Little Rock to study in the master of fine arts program at Circle in the Square in New York from 1987 to 1989. Despite a long Internet Movie Database list of 20 years of appearances, Greer is candid about his career.

“I’ve had really good years, and I’ve had really bad years. I’ve only been back here since 2003,” he recalls after trying his luck for years in California. “It’s extremely difficult to make it as an actor no matter where you are.”

“When the Louisiana market started blowing up, I got in that kind of migration. There were guys who came back from both coasts trying to take advantage of that. In the last decade, nearly all of my work has been in the Louisiana market,” Greer says. “Ten years ago, I’d walk into a room for an audition, and there’s 10 guys in room. Now there’s 40.”

Greer is scheduled to leave Arkansas in January to try his luck with the coming pilot season in Los Angeles. Fresh off a meaty role in Homefront, he is optimistic about what future characters might await him. When asked why he has been willing to face a multitude of frustrations and even encourage his offspring to do the same, he replies, “Until you’re in something that everybody takes notice of, it continues to be a tough gig.

“When it’s good, and when it’s a good role and when everything feels like it’s going on all cylinders, it’s something that I can’t even describe. It’s almost an out-of-body experience, in a way. To be working with people who have some faith in you as an artist and want you involved in something that has the potential to be something great. I’ve had a chance to work with Robert Duvall, Dustin Hoffman and some great directors. When it’s good, it’s a thrilling thing. The feeling is what I felt the first time I stepped onstage at UALR. It’s something to love.”