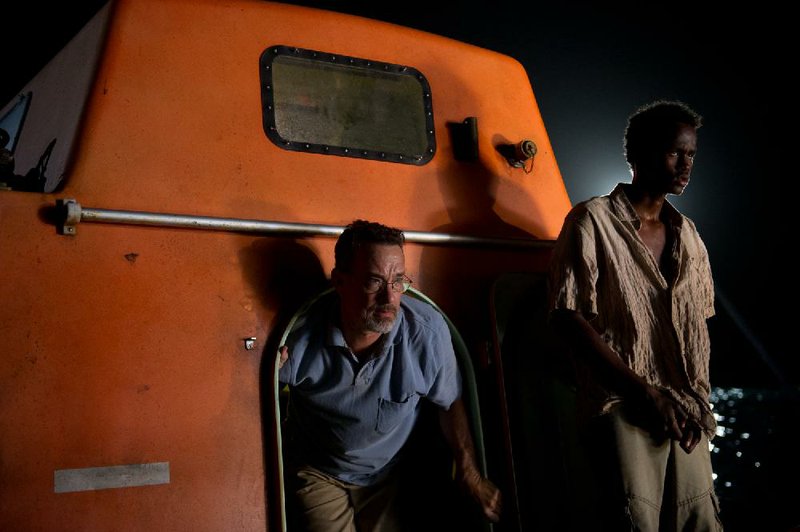 The last time Tom Hanks ventured out into the ocean, he ended up becoming intimately involved with a bloodstained volleyball. In Captain Phillips, Paul Greengrass’ taut hijacking thriller based on a real-life ordeal, he doesn’t fare terribly much better. He plays the titular captain, head of a large cargo ship that plans a voyage through the increasingly dangerous waters off the coast of Somalia, where small bands of modern-day pirates lie in wait to chase unsuspecting cargo ships, board them, and hold the crew and cargo hostage for exorbitant ransoms.

Greengrass takes the time to introduce the two soon to-be-colliding forces. Capt. Phillips, known as Rich to his wife and family, is preparing for his trip from Vermont, where snow is fresh on the ground and the wheel-wells of his SUV are spattered with mud. Meanwhile, in the arid dunes of Somalia, a skinny, large-toothed man named Muse (Barkhad Abdi) is given his orders from a warlord to entrap another ship. He picks a ragtag crew, including a young teenage boy (Barkhad Abdirahman), a veteran pilot (Mahat M. Ali), and a strong, mean-spirited man from another village (Faysal Ahmed).

When the two men eventually meet, somewhere deep in international waters, it’s not particularly cordial. Muse and his bunch eventually take the ship over, despite Phillips’ various preparedness lectures and safety protocols. When push comes to shove, the cargo ships are almost entirely unarmed, leaving their defenses up to little more than water cannons and flare guns (and, possibly, water balloons). The thing is, even though the Somalis are armed with assault rifles, the manpower odds are still strongly against them. Through several deft maneuvers and well-orchestrated stalling tactics by Phillips and his crew, they manage to expunge the invaders in the ship’s own lifeboat, but not before they take Phillips captive and haul back toward the Somali coast with their human cargo.

This, naturally, alerts theU.S. Navy, which moves to intercept the lifeboat before it can make landfall, leaving everyone in very tense circumstances: Phillips, because he’s at the mercy of the Somalis, and Muse, because his simple kidnapping scheme has suddenly gotten the full attention of the most powerful military in the world.

Greengrass’ strength as a filmmaker has always been his ability to shoot Hollywood-style thrillers as gritty, neo-realist films that look like documentaries. The secret to the success of the Bourne films (the latter two of which Greengrass made) was the way he was able to take a bag of standard action story tropes and infuse it with just enough realism to give them more than the expected resonance. At times in his films, it’s almost jarring to see a recognizable Hollywood actor, such is his ability to create these faux-documentary thrillers.

In that, he’s more or less in his element here. While not as engagingly pragmatic as the earlier Swedish film A Hijacking, whose drama lies not in the takeover, or the plight of the crew, but in the endless, stalling negotiations between the Somali captain and the chief executive of the shipping company that owns the vessel, Greengrass, with his bracing handheld style, nevertheless gives the film the right amount of stark, believable detail and nuance to make it seaworthy.

Hanks, for his part, does just fine as the beleaguered and terrified captain - though it must be said that for all the film’s admirable verisimilitude, Hanks’ New England accent (“work” becomes “wook”) leaves something to be desired. Phillips is a decent, hardworking, family-loving man, nothing more, nothing less. He’s not braver than the rest of us, and certainly isn’t trying to be a hero. He’s doing his job to the best of his ability. More than just acting, Hanks has a certain personal charisma that generally leaves us wanting to pull for him. You wouldn’t see such a man try and pull off a role like Col. Kurtz, or William Cutting, but as an amiable everyman, he’s just about right.

In a different sort of film, one shot entirely from the perspective of the bedraggled Somali pirates, you could easily see your way to sympathize with them. Living in a perpetually poor, war-torn country, under the strict servitude of thoroughly bloodthirsty warlords, they want only to get their payoff as quickly and bloodlessly as possible and return home to their families. For this unfortunate crew, though, it becomes four simple fishermen against three fully loaded Navy warships, a fleet of helicopters and Navy SEALs who swoop down out of their plane through the night sky like extremely well armed birds of prey. It’s like watching a small child try to engage a fourth-level black belt in a tae kwon do tournament.

As it is, Greengrass balances between the two factions just enough to keep it from seeming like another blatantly reverent military promenade. We might be thankful for a military police force such as this, but with all its might and capability, it can’t do a damn thing about preventing desperate people from these kinds of despairing actions.