The little armored one 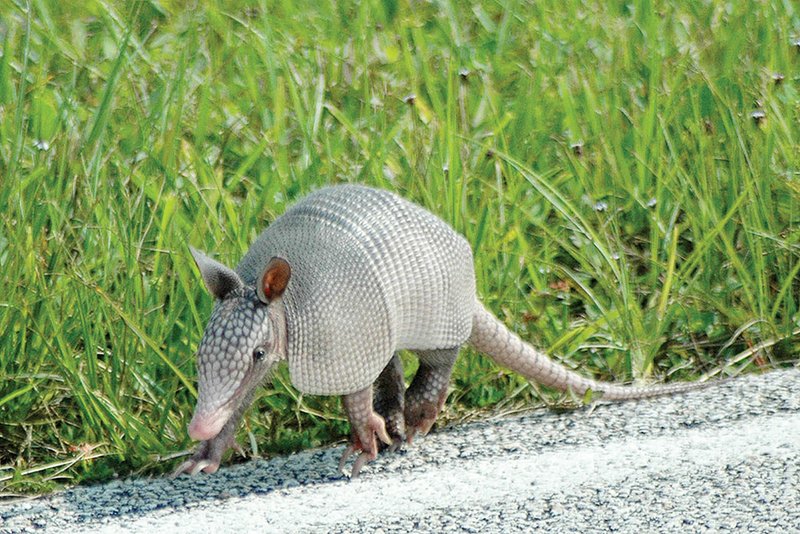 Armadillos are often seen on roadways, particularly at night. Unfortunately, many die after encounters with vehicles.

Arkansas has its share of unusual animals, but none more so than the nine-banded armadillo (Dasypus novemcinctus). This timid mammal looks like it was hastily fabricated from spare animal parts.

Were you to build one, you might start with a possum. The size and shape are ideal, including the long pink snout and cute little ears.

Now fashion your possum a suit of armor. Peel the thick scaly hide off a big garfish. Use one big piece to shield the possum’s shoulders, another to shield its pelvis. Join these with nine armor hoops. This will allow your armadillo to bend in the middle like an accordion.

A suit of armor is useless without a helmet, so let’s add that. And we’ll need 12 to 15 rings of armor to encircle and protect the tail.

With such excellent armor, offensive fangs are unnecessary, so those sharp teeth can go. We’ll get rid of the canines and incisors altogether, and plug in a few molars, minus the enamel, in the rear of each jaw. Ants and other bugs are our armadillo’s blue-plate special, so let’s give him an anteater’s long, sticky tongue and some grizzly-bear claws for digging.

Voila! We have created a nine-banded armadillo, known affectionately by some Arkansans as “possum on the half-shell.”

In many respects, the armadillo’s life history and activities are even more inconceivable than its appearance.

The name armadillo comes from the Spanish and means “little armored one,” referring to the leathery shell, which is unique among mammals. The shell is tough, but not hard like a turtle’s, being composed of some 2,500 bony plates overlaid with cuticle-like scales. This armor covers the animal’s shoulders, pelvis, tail and forehead — everything except the possum-like ears and soft underparts.

When threatened by a coyote, bobcat or other predator, the armadillo may curl into a ball, depending on its bony armor for protection, but this is usually a last resort. More likely, it will dig into the soil with the spadelike claws of the forefeet, leaving only the smooth shell exposed to the carnivore’s teeth. After their beagles bayed an armadillo one day, I watched two hunters spend hours trying to dig it out. Their digging could not equal that of the spade-footed critter, which buried itself several feet deep during the pursuit.

The armadillo is also a high jumper. When startled, he simply fires himself out of a catapult. He can cover 4 to 6 feet in one bound. Unfortunately, armadillos have poor eyesight. When a vehicle approaches, they may jump just in time to whack their skull on the bumper. Road kills are the No. 1 cause of mortality.

Who wouldn’t be impressed by the armadillo’s extraordinary reproductive cycle? Armadillos mate in summer, but the fertilized egg doesn’t attach itself to the wall of the female’s uterus until early winter. Upon implantation, the egg divides to produce four embryos that develop into genetically identical quadruplets. Each litter contains four young, all of the same sex. Armadillos are the only mammals in which such double-twinning regularly occurs.

Hungry armadillos grunt and root like piglets, taking with relish whatever their busy little snoots uncover. Insects and other invertebrates comprise more than 90 percent of the diet, and with their keen sense of smell, they can detect them 6 inches underground. With one swipe of the long sticky tongue, they can lick up 70 or more ants.

Armadillos have been accused of eating eggs of quail and other ground-nesting birds, but extensive research has shown that armadillos exhibit little interest in birds’ eggs. With no canine teeth or incisors, they find the eggs hard to crack. Bird nests sometimes are damaged as armadillos search for food, but armadillos make up for these losses by eating thousands of fire ants that kill newly hatched quail and other fledglings.

One hundred sixty five years ago, the total U.S. armadillo population was zero. The first one crossed the Mexican border into Texas around 1849, and from that beachhead, the species expanded its range north and east. The earliest reports of the species in Arkansas were in 1921, and by the 1940s, armadillos were well-established in western counties. All 75 counties now have resident populations.

Scientists are using armadillos as living test tubes for the study of leprosy, a disfiguring and disabling malady that infects an estimated 2 million people worldwide. Armadillos are one of the few mammals besides man that can harbor the leprosy bacterium, so scientists can infect them for experimental work on this disfiguring malady. Research begun in the 1970s has greatly improved the treatment of leprosy, and there is hope, thanks to the armadillo, that a vaccine will soon be available.

Most people think of the armadillo rather contemptuously as a little animal of no particular importance. They never realize when they see one snuffling through the woods that this little “possum on the halfshell” is among the most amazing of all the four-footed inhabitants in The Natural State.