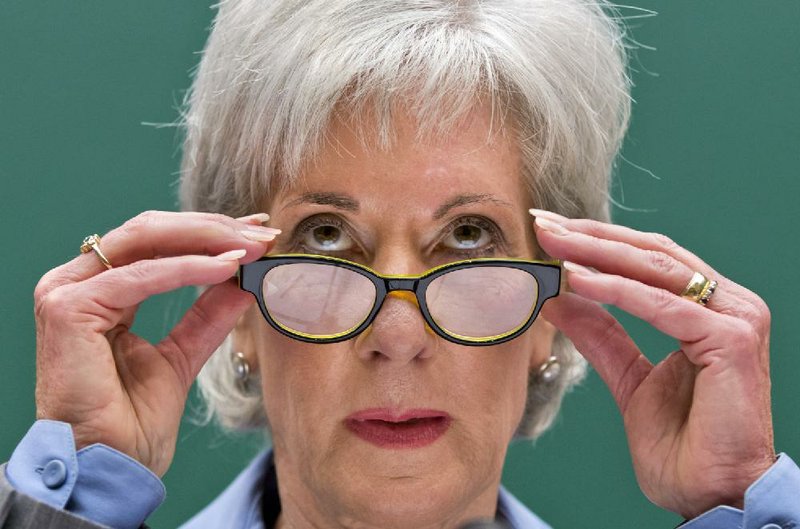 WASHINGTON - Kathleen Sebelius, secretary of the Health and Human Services Department, apologized Wednesday for the frustration that millions of Americans have experienced while trying to shop for insurance on the healthcare.gov website, even as she defended the problem-plagued roll out of President Barack Obama’s health-care law and tried to explain the cancellation of hundreds of thousands of individual insurance policies.

Sebelius, at a hearing of the House Energy and Commerce Committee, said she was “as frustrated and angry as anyone with the flawed launch of healthcare.gov.”

Rep. Fred Upton, R-Mich., chairman of the committee, said: “Over the months leading up to the Oct. 1 launch, the secretary and her colleagues repeatedly looked us in the eye and testified that everything was on track. Despite the numerous red flags and lack of testing, they assured us that all systems were a go. But something happened along the way. Either those officials did not know how bad the situation was, or they did not disclose it.”

Moreover, Upton said: “There are millions of Americans coast to coast who no doubt believed the president’s repeated promise that if they liked their plan, they’d be able to keep it. They are now receiving termination notices.”

Sebelius said the cancellation of some individual policies was a justifiable byproduct of the 2010 health-care law. Those policies will be replaced, she said, with new policies that provide better benefits and more consumer protections, often at similar or lower prices.

People in the individual market have never had consumer protections, Sebelius said, adding, “They can be locked out, priced out, dumped out.”

However, in recent weeks, many consumers have received cancellation notices offering new policies at prices much higher than what they have been paying.

On Wednesday, Georgia Insurance Commissioner Ralph Hudgens said that as many as 400,000 state residents who buy their own insurance could receive cancellation notices or see their plans modified.

Hudgens spokesman Glenn Allen said the figures were based on internal estimates, and there was no way to tell how many of those would have their policies canceled outright. Allen could not say whether those losing their health plan could expect increases or decreases in premiums under a different plan.

Sebelius minimized the significance of changes in individual insurance policies, which have shocked many consumers.

“In the individual market, plans change every year,” she said, adding, “This market has always been the Wild West.”

Rep. John Shimkus, R-Ill., said the federal website was misleading because it often displayed inaccurate prices. People who click on a link to “preview plans and prices” see a variety of health-insurance options.

But, Shimkus said, that part of the website lumps people into two broad categories. Anyone under the age of 50 sees the average price for a 27-year-old, he said, while people 50 or older see the premium for a person 50 years old.

To see prices for their particular circumstances, consumers need to create personal accounts at healthcare.gov, and many have encountered roadblocks trying to do that.

Confidential government documents show that the main contractor on the project, CGI Federal, a unit of the CGI Group, warned the Obama administration of problems with the website in early September.

“Due to the compressed schedule, there is not enough time built in to allow for adequate performance testing,” CGI said in a report sent to the federal Centers for Medicare and Medicaid Services on Sept. 6.

Four days later a top CGI executive, Cheryl Campbell, told Congress that the company was “confident in its ability to deliver successfully” on its contract, so people could use the website to enroll in health insurance plans starting Oct. 1.

In its report, CGI said it was a “near certainty” that the company would not have enough time for testing. The company said it wanted to “work with [the Centers for Medicare and Medicaid Services] to establish a realistic schedule that will allow for the necessary testing.”

Sebelius acknowledged that comprehensive testing of the website, which began in mid-September, was inadequate.

“Clearly we did not adequately do end-to-end testing,” Sebelius said Wednesday. “Each of the component parts was tested and independently validated.” But, she said, the government did not do enough testing of the whole system from start to finish.

Sebelius also faced a new range of questions Wednesday about a security memorandum from her department, which revealed that the troubled website was granted a temporary security certificate Sept. 27, just four days before it went live Oct. 1.

The memorandum said incomplete testing created uncertainties that posed a potentially high security risk for the website, which receives financial information on many consumers seeking subsidies to help pay their premiums. It called for a six-month “mitigation” program, including ongoing monitoring and testing.

Sebelius said the system is secure, even though the site’s certificate, known in government parlance as an “authority to operate,” is of a temporary nature. A permanent certificate will be issued only when all security issues are addressed, she stressed.

The security certificate is required under long-standing federal policy before any government computer system can process, store or transmit agency data. The temporary certificate was approved by Medicare chief Marilyn Tavenner, the senior Health and Human Services official closest to the roll out. No major security breaches have been reported.

Tavenner, speaking to lawmakers Tuesday, suggested that CGI bore some responsibility for the website problems.

“We’ve had some issues with timing of delivery” of services by CGI, Tavenner told the Ways and Means Committee. She did not specify the nature of the concerns.

She also declined to say how many people had enrolled in health plans through healthcare.gov, saying the numbers will be disclosed once a month starting in mid-November.

Sebelius predicted “it will be a very small number,” given the site’s problems.

Sen. Lamar Alexander, R-Tenn., introduced a bill this week that would require the administration to issue weekly reports showing how many people had obtained insurance through the federal exchange, which serves 36 states.

“Before the Internet, RCA knew how many records Elvis was selling every day, Ford knew how many cars it was selling and McDonald’s could tell you how many hamburgers it had sold each day,” he said. “Yet the Obama administration cannot tell us how many Americans have tried to sign up for Obamacare. That’s the biggest secret left in Washington. The National Security Agency could learn lessons from Secretary Sebelius.”

In Massachusetts on Wednesday, Obama said he takes “full responsibility” for fixing the flawed exchange, while telling an audience that the state’s experience with its health-care law portends eventual success for the federal version.

“This is the hall where seven years ago Democrats and Republicans came together” to overhaul the state’s healthcare system, Obama said at Faneuil Hall, where then-Gov. Mitt Romney signed the state measure into law. “It worked.”

Obama acknowledged that some people will have to pay more for medical coverage and said that Massachusetts faced challenges similar to those confronting the national effort. He said there was slow initial enrollment when the state law took effect and that the “parade of horribles” - predictions that companies would drop coverage and that the cost of care would shoot up - didn’t come to pass.

Romney, a Republican who challenged Obama in the 2012 presidential campaign on a promise to roll back the federal health law, said in a statement Wednesday that the president didn’t learn the right lessons from Massachusetts.

“Health reform is best crafted by states with bipartisan support and input from its employers, as we did, without raising taxes, and by carefully phasing it in to avoid the type of disruptions we are seeing nationally,” he said in the statement posted to his Facebook page.

When Romney signed the state law, he was joined by the late Sen. Edward Kennedy, D-Mass., who had championed universal health care for years. Obama said a major part of the state law’s success was the bipartisan support it received from passage through implementation.

The federal law received no Republican support when it passed, and House Republicans have voted more than 40 times to repeal the measure since it was enacted.

Meanwhile, a conservative group filed a federal lawsuit Wednesday seeking to have the law declared unconstitutional, arguing that the government postponed its so-called employer mandate without the necessary congressional approval.

The Association of American Physicians and Surgeons is seizing on a provision that was supposed to go into effect next year but ultimately was postponed for 12 months. That provision requires employers with 50 or more workers to offer affordable coverage or face fines, but it’s been put off until 2015.

That employer mandate was originally to go into effect at the same time as a mandate requiring individuals to carry health insurance or pay fines. The lawsuit argues that since the two aspects have been separated, people will now have to spend more on premiums because they’ll be required to buy insurance without the “protection” of the employer mandate.

Information for this article was contributed by Robert Pear of The New York Times; by Margaret Talev, Alex Wayne, Drew Armstrong, Anna Edney and Alex Nussbaum of Bloomberg News; and by Christina A. Cassidy, Dinesh Ramde Laurie Kellman, Ricardo Alonso-Zaldivar, Jack Gillum and David Espo of The Associated Press.