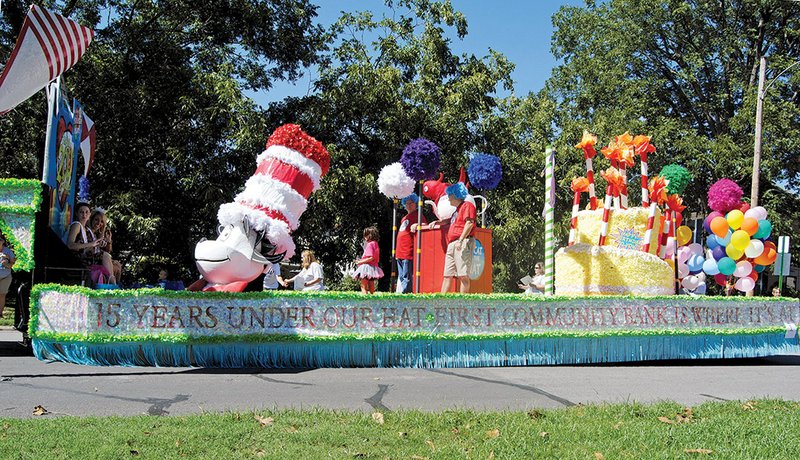 Last year’s First Community Bank float was themed after The Cat in the Hat, by Dr. Seuss.

BATESVILLE — 2013 marks the 70th year for the Batesville community to celebrate the waterway that flows through Independence County.

Crystal Johnson, president and CEO of the Batesville Area Chamber of Commerce, is in charge of this year’s White River Water Carnival, to be held Sept. 21.

“This will be the fourth year I’m in charge,” Johnson said.

This year, Johnson said, the festivities will include events the carnival has had in the past.

“This year, we’ve brought back some of the old events of the Water Carnival that have been lost over the years,” Johnson said. “We’re bringing back the car show. The River City Cruisers do the car show for us, with over 100 cars.”

The variety of automobiles in the show will range from antique autos to muscle cars.

“Another event will be the Putt Putt Tournament,” Johnson said. “It started in the ’70s, and it was a tradition for 20 years. We brought it back this year.”

In addition to long-lost traditional events that have been resurrected for this year’s carnival-goers, some new activities have been created as well.

“This year, we’re having a magic show, featuring Justin Flom,” Johnson said. “He’s got a show in Vegas and does illusion and magic, and he has ties to Concord.”

Flom’s performance will precede the fireworks show, which will begin at 9 on the night of the carnival.

Another new event this year is the Afterglow 5K race.

As of Aug. 27, 1,200 runners had registered for the 5K race, and Johnson said she will probably have to cut off the registration at 1,500 participants.

“The theme is ‘glow.’” Johnson said. “Participants are encouraged to submit names for [teams], and wear neon and white clothes.”

There will be black lights placed around the 5K course, so runners can see, and their clothes will glow as they run.

“After the race, runners can come back to Riverside Park, and we’re going to have a DJ and a glow tent for a dance party until 2 in the morning,” Johnson said.

One of the White River Water Carnival’s longtime traditions, the parade, will travel down Main Street in Batesville again this year.

“It’s very traditional, and we have it every year,” Johnson said. “We’re going to continue with it.”

The first year Johnson was in charge of the carnival, she said, there were about 500 attendees, but last year’s event drew 3,500 people.

She said she would like to see 5,000 people come out to the carnival this year. Every year, Johnson said, her favorite part of the event is planning it.

“It takes year-round planning,” she said.

“That month before [the carnival], you have to get everyone organized, and then you get to watch all of the kids and families at the event. It’s really fun, and there’s something there for everyone.”

More information about this year’s White River Water Carnival is available at www.whiteriverwatercarnival.com.