Teacher, poet for 40 years and counting 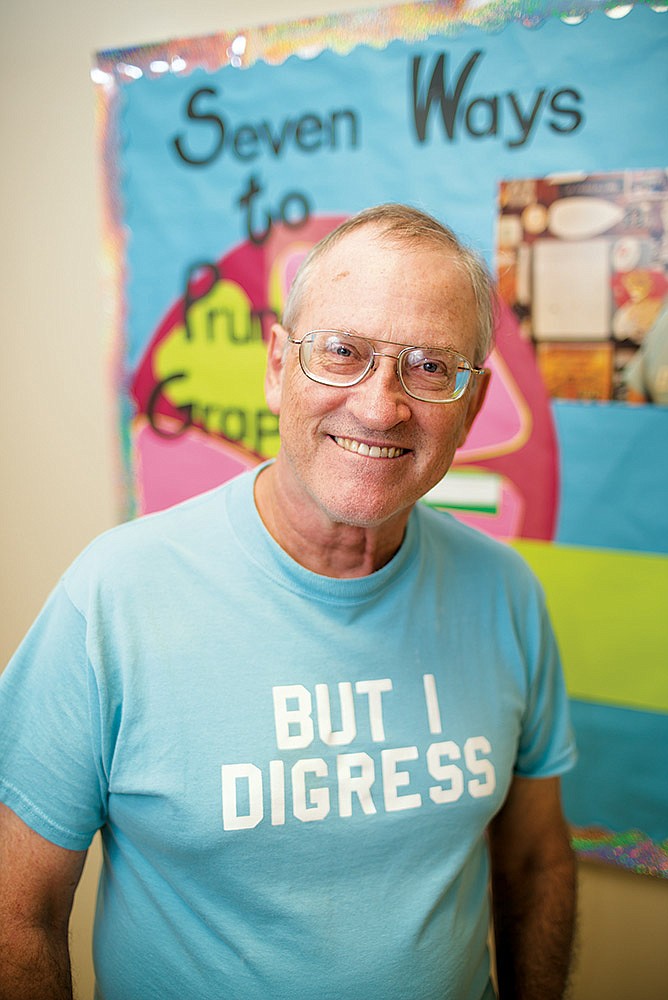 Johnny Wink is a poet who has served on the faculty of OBU since 1973. He recently published a new book of poetry titled Seven Ways to Prune a Grapefruit.

Even before you enter Johnny Wink’s office in the English department of Ouachita Baptist University in Arkadelphia, it is easy to see that the professor has been there for a long time.

The wall outsider his door is covered with photos, poems, articles, motivational sayings, cartoons and more photos. However, that is just a prelude to Wink’s office, which is covered with photos of former students and teachers; a gallery of photos of his wife, Susan; old posters announcing lectures; and pictures — large and small — of dinosaurs. Those spring from a joke nickname he had for a former colleague that got turned back onto Wink and has evolved into a university tradition.

“I used to call one of the other professors Godzilla. If you knew him, you would know why,” Wink said while standing to point to many of the dinosaur photos, drawings and figurines. “Somehow, some of the students thought it referred to me, and they started calling me that. Then came the pictures and little toy dinosaurs.”

The name plate on his door seems to make this Jurassic connection official. The sign proclaims the office as being that of Dr. Thunderlizard — an amazing name for the Betty Burton Peck Professor of English at Ouachita Baptist.

“One day, someone just put it there,” Wink said, “so I have never changed it. People still seem to be able to find me.”

Like the classic and thought-provoking novels Wink lectures about in class, all of the dinosaur images and toys, and the many pictures and memorabilia that cover three of the office walls and even the ceiling, are the pieces in a game that was invented by the students years ago and is encouraged by the teacher. The other wall houses bookshelves where the books are also behind plastic dinosaurs and photographs.

“The idea is to get me talking about something on the walls and then see how many other things I have to point out to finish telling the story about the item they pointed out in the beginning,” Wink explained with a broad smile. “If one student’s question led me to point out 10 pictures, and the other student’s selection got me talking about seven, the first student wins, and I will let them select one of my dinosaurs.”

The plastic dino-prizes sit on the windowsill behind Wink’s desk and chair, looking like a marching line of crayon-colored allosauruses, tyrannosaurs and stegosauruses.

Evidently, it is natural for the professor to move from one story to another and back again. Wink was dressed in a T-shirt that read, “But I Digress.”

Of course, no one would surely link the lively Johnny Wink, as he prefers to be called, with those creatures from long ago because he has been teaching at OBU since 1973. The eclectic, left-leaning, peacenik poet with the sunny disposition can sometimes appear as a manifestation of a being from the time of flower-power and antiwar marches. But his focus is on today’s students, whom Wink said he enjoys.

“The students here are nice,” Wink said. “Over the years, I have always found them to be polite, and I have never had a confrontation with any of them. This is a wonderful teaching environment, and my colleagues are a joy to work with. I have never wanted to leave, and I certainly never wanted to be an administrator.”

Wink was born during World War II in New London, Conn., where his father was training for the submarine service. Both his father and grandfather were career military men, but both became college professors.

“I was a Navy brat. I had lived everywhere from Panama to New England,” he said. “I think that kind of moving around has helped me create a bond with the missionary kids who have come here after traveling all over the world. We have a different outlook on many things.”

When Wink was in the fifth grade, his father returned to his home state of Mississippi. Wink said he then grew up there and calls Gulfport, Miss., home.

“But I had friends that teased me that I wasn’t really a Southerner,” he said. “I have one who always told me the coasts I lived on were different than the one in south Mississippi.”

His dream was to be a baseball pitcher, but like many with such aspirations, it was not to be.

“I had a good curve and some other pitches, but my fastball could not break a pane of glass,” he said.

In trying to find a career, he realized that besides baseball, he enjoyed reading.

“I found out that as an English major, they would let me read books,” Wink said. “As a teacher, I could even make a living reading books and talking about reading books.”

He studied at the University of Southern Mississippi but knew that to teach, he would need an advanced degree.

“I did not want to go far from home so was thinking about Old Miss or going to Alabama. Arkansas wasn’t on my radar,” Wink said. “I had a former teacher named Tom — I can’t remember his last name — he was at the University of Arkansas, and I wrote and asked him to write a letter for me as a reference. He said I could come to Fayetteville, and he could get me a teaching assistantship, so I went there from 1966 to 1973.”

Wink said Arkansas was “exotic” to him, but he settled in to learn, teach and protest the Vietnam War, which was in full swing during his grad-school years.

“I was a bit of a leftist and took part in regular silent anti-war vigils on campus,” Wink said. “I remember one time someone came on campus to talk about how we needed to support the war, and I was there with my sign, and a woman sitting behind me kicked me in my [behind]. It wasn’t very hard, but I guess she thought it was her patriotic duty.”

It was in Fayetteville that he met Susan, who was to become his wife and his lifetime inspiration.

“Look at her,” Wink said, pointing out one of the many pictures of the young dark-haired woman that are placed around his office. “I was not in her league, and I was afraid to talk to her.”

But politics helped ease the way for the shy and recently divorced anti-war protester.

“I saw she had a flower on her notebook and a McCarthy sticker,” Wink said.

Gene McCarthy, a senator from Minnesota, was the peace candidate in the 1968 presidential campaign who won the New Hampshire primary but lost the Democratic nomination.

“Well, after seeing that, I got up the courage to talk to her,” Wink said.

“Susan is the greatest influence in my life,” Wink said. “Most of my poems are about her or to her. She is a remarkable woman, and teacher.”

Wink said his wife, who was on the faculty with him at Ouachita Baptist, retired more than 10 years ago but came back to teach advanced grammar, history of the English language and linguistics.

“She was able to be both an adjunct instructor and a professor emerita at the same time,” Wink said. “She said it was the most rewarding time of her teaching career.”

After Susan retired again, Wink took over teaching her classes. After all, he had audited every one of them.

How the couple came to OBU and Arkadelphia begins with another letter to the Fayetteville campus.

“The job came looking for me,” Wink said. “The head of the department wrote to a professor and asked if any of the new graduates would be interested in coming to teach there. I was the only one interested. I came down for an interview and loved the school and the area.”

While his doctoral dissertation was on the modern novel, he has taught almost all the courses offered by the English department during his 40 years as a teacher. He has also taken many classes — some for credit.

“I have figured that I am a second-semester junior.”

He took foreign-language classes in order to read poetry in the original language. He was especially interested in studying Latin and classical Greek.

“I begged them long enough, so now I teach Latin classes here,” Wink said. “It is one of my favorite subjects.”

Wink continued to write poetry while teaching. A book of his poems was published in the 1980s but is long out of print.

“I have been writing poems for many years now for the sheer fun of it,” he said. “Every once in a blue moon, I’ll try my luck by sending a poem to a magazine, but I had no thought of trying to get another book out.”

However, Wink sent a poem, “Great Gray Moles,” to a former student, and that recently led to a new book contract.

“Once I was brought on to serve as poetry editor for Unsettling Wonder, a European publisher, I sought one of my favorite poems by Dr. Wink for inclusion in our inaugural issue,” said Joshua Roberts, an assistant professor of English at Palm Beach Atlantic University in Florida and a former student of Wink’s at OBU. “It was received so positively that we decided to commission a full volume of Dr. Wink’s work.”

The book, Seven Ways to Prune a Grapefruit, has been called funny and wise, thoughtful and intelligent by the publisher. That is just a reflection of the professor, said Doug Sonheim, chair of the department of English and modern foreign languages at Ouachita Baptist.

“Friend and colleague Johnny Wink delights his students and fellow teachers at OBU with stories, jokes, daily words, nicknames and poems,” Sonheim said. “Reading a Johnny Wink poem, you are delighted, tickled, puzzled, moved, thankful and made wiser. You read a poem, blink your eyes, scratch your head, grin and ponder.”

After 40 years on the job, Wink had to answer a question about retirement. He then told a story of family history.

“After World War II, both my father, with his 20 years in the Navy, and my grandfather, who had been in the Navy, then the Army, went to college under the GI bill,” he said. “They roomed together in college.”

After graduation, Wink’s grandfather got a job teaching history at a college in Mississippi.

“I’m 64 now, and I think when my grandfather was that age, he was in his rookie year as a teacher,” Wink said. “He taught until he was 76. Well shoot, if my health holds and I still like going to class, I might stay another 12 years.