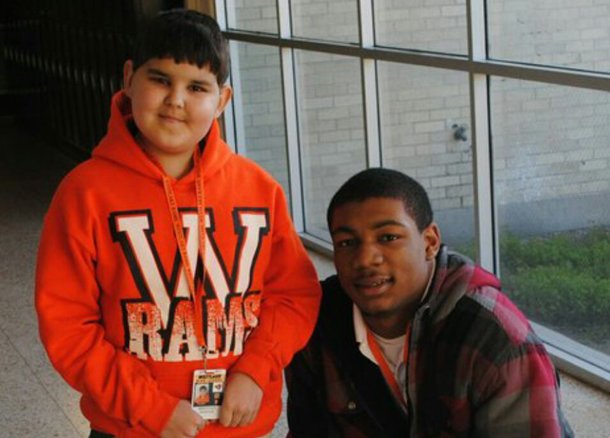 LITTLE ROCK — Tight end Jacory Washington will forever be shaped by his relationship with Brennan Daigle, who died at age 10 from a rare form of cancer called embryonal rhabdomyosarcoma.

Washington, a LSU commitment who is being recruited by Arkansas, met Daigle during his freshman year.

“He actually came and shadowed me for a day,” Washington said. “Everybody knew he wasn’t going to be able to make it to high school. My teacher asked me if he could follow me.”

The two began to spend time together, and Washington said Daigle taught him plenty.

“He taught me to live life every day, live life to the fullest,” said Washington, who attends Westlake (La.) High School. “He always had a saying, which was Philippians 4:13: I can do all things through Christ which strengtheneth me. That’s what I live by.”

Washington said Daigle made a major impact on his life.

“It’s a life-changing experience,” said Washington, who plans to make an official visit to Arkansas. “He taught me so much. I’m grateful I had a chance to meet him.”

“In my case, it taught me to fight through adversity,” Washington said. “He was a strong guy. Whenever I’m feeling down or something doesn’t go right, I think about him.”

Hill, 6-1, 178 pounds, 4.5 seconds in the 40-yard dash,received a scholarship offer from Razorbacks on Saturday following his strong performance Friday night.

Coach Brad Bolding gave Hill a heads-up during the pregame meal that the Razorbacks coaches were coming to watch him play.

“That kind of got my mind-set ready,” Hill said. “My mind-set was to go out here and prove myself, because at Conway [during a scrimmage] I didn’t do nothing. I had a bad game, and I had to go and get my mind right and come out here and play my best.”

Hill finished with 5 receptions for 71 yards and 2 touchdown and returned a kickoff 99 yards for a score to help lead the Charging Wildcats to a 55-13 victory. Using his elusiveness and speed, Hill turned a short reception into a 33-yard touchdown with 35 seconds left in the first half.

“Coach was telling us to get out of bounds but I forgot,” said Hill, who also has an offer from Auburn. “I was just trying to get to the end zone.”

Hill had 48 receptions for 845 yards, 11 touchdowns and 27 carries for 233 yards and 3 touchdowns while playing for Bryant last season, when he named to the Arkansas Democrat-Gazette’s Super Sophomore team.

Hill said the offer from Arkansas means a lot.

“I’ve been watching them since I was little,” he said.

Day, 6-2, 212, 4.5, is already orally committed to the Razorbacks but turned in a nice performance as well. He rushed 13 times for 151 yards with 1 touchdown. A chunk of his yardage came on an 89-yard touchdown run in the second quarter that put the Charging Wildcats ahead 26-0.

“Their linebackers run up the field so much so I knew if I make the first linebacker miss I would have one defender left to go,” Day said. “I had some great blocking downfield by Fabian [Lewis]. I had one more man to beat. I kind of got tired, so I cut back and gave him a stiff-arm and let him go by me.”

The performance wasn’t a bad way to start his senior season.

Day said seeing Lunney and Smith on the sideline motivated him.

“They gave me an extra push,” he said. “I saw Coach Lunney and I figured I should go ahead and make a big play for them.”

Arkansas hosted approximately 50 recruits on unofficial visits for the Samford game at War Memorial Stadium on Saturday night. Here are some of the notable prospects who attended the game:

UA commitment has attended both games.

Received offer from Hogs on Saturday after big game Friday.

Has several offers, including LSU, but says Hogs lead

Junior has offers from Arkansas, Ole Miss, Alabama, others.