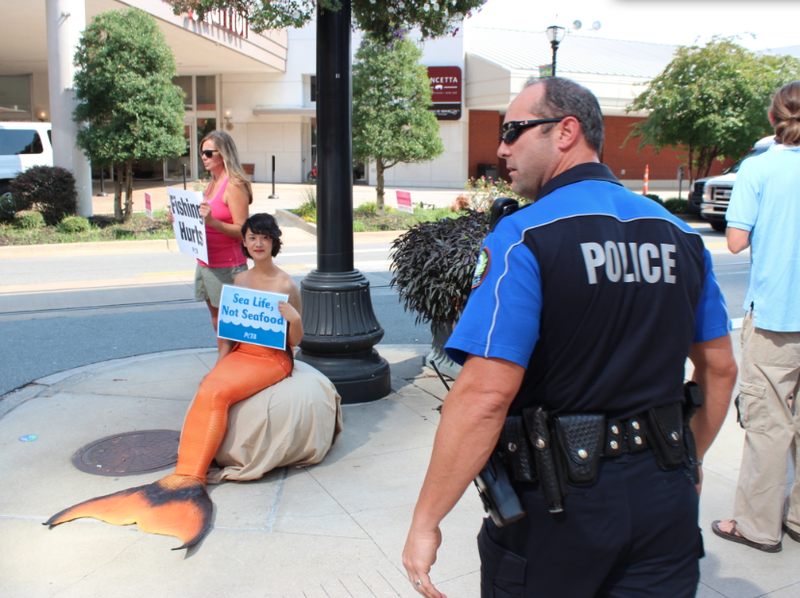 A police officer tells protesters with PETA, including one dressed as a mermaid, and bystanders to keep the sidewalk in the area clear for pedestrians Tuesday morning in Little Rock.

A People for the Ethical Treatment of Animals volunteer wearing a mermaid costume and little else took to a downtown Little Rock street corner Tuesday to protest outside an American Fisheries Society meeting in Little Rock.

Amanda Slyter, 25, wore the costume at the corner of Louisiana and Markham streets and held a sign reading "Sea Life, Not Seafood" in front of her seemingly otherwise bare top.

The protest was aimed at drawing attention to PETA's stance that fish feel pain and fear and shouldn't be eaten, said Katie Arth, 26, campaigns manager for the group.

"All animals deserve protection from abuse, whether they have fur, fins or cats or catfish," she said, noting the group encourages people to eat plant-based vegan food instead of fish.

A message seeking a response to the protest from the American Fisheries Society wasn't immediately returned late Tuesday morning.

Several people stopped to take photos of the "nearly naked 'mermaid'" display, which is how PETA described it in a news release in advance. Some passersby accepted literature from the group and others walked by.

Arth, who also held a sign, said the group will conduct the protest at various sites around the country.